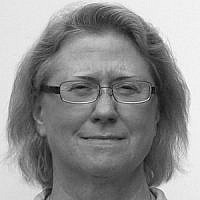 The Blogs
Tricia Miller
Apply for a Blog
Advertisement
Please note that the posts on The Blogs are contributed by third parties. The opinions, facts and any media content in them are presented solely by the authors, and neither The Times of Israel nor its partners assume any responsibility for them. Please contact us in case of abuse. In case of abuse,
Report this post.

Bethlehem Bible College (BBC) hosted a youth conference sponsored by Christ at the Checkpoint Young Adults July 16-18, 2015 in Bethlehem titled “The Kufiyyeh and the Cross.”

According to Christ at the Checkpoint (CaTC) Director, Dr. Munther Isaac: “Young Palestinian Christians are facing many challenges – political and social. Many of them are beginning to feel that they do not belong here and that they have nothing to contribute to their societies.”

In an article on the BBC website, Isaac described the purpose of the conference as a response “to the needs of this important segment of the Christian community, and to encourage their participation in discussing the challenges of our society from a Christian perspective.”

The organizing committee for the conference drafted the following mission statement:

“The mission of ‘Christ at the Checkpoint Young adults’ is to motivate Palestinian Christian youth to take an active role as followers of Christ in spreading justice and peace, through discussing the challenges of our societies from a biblical perspective.”

This statement is quite similar to the stated mission of the biannual Christ at the Checkpoint conferences, which is “to challenge Evangelicals to take responsibility to help resolve the conflicts in Israel/Palestine by engaging with the teaching of Jesus on the Kingdom of God.”

However, a video posted on YouTube on March 26, 2015 for the purpose of promoting the recent young adult conference provides a stark contrast to the seemingly positive purpose of encouraging attendees to “take an active role as followers of Christ in spreading justice and peace.”

Rather than promote any semblance of peace or justice, much less any teaching of Jesus on the Kingdom of God, the video is nothing more than an inflammatory piece of anti-Israel propaganda in which Israel is equated with ISIS through the use of explicit imagery.

Images of ISIS captives about to be beheaded are juxtapositioned with images of the security barrier Israel was forced to build to protect its citizens from suicide bombers during the second Intifada.

Images of the Jordanian pilot about to be burned alive in a cage are juxtapositioned with scenes of Palestinians going through a checkpoint.

And images of the ISIS flag are juxtapositioned with those of the Israeli flag.

The obvious implication is that the security measures Israel has been forced to take in response to Palestinian suicide bombers is equivalent to what ISIS is doing to people as it seeks to forcibly establish a caliphate ruled by an extreme form of Islamic law.

The video also equates Israel and ISIS with the H1N1 virus, or swine flu. In so doing, the contagious spread of swine flu is equated with the terrifying ease with which ISIS is conquering territory, and with the existence of Israel, or at the very least, Israel’s need for a security barrier with checkpoints.

The analogy between Israel and swine flu is reminiscent of the raging of Hitler against the Jews as a “dangerous bacillus,” and it is consistent with the dehumanizing designation of Jews as pigs that is common throughout the Muslim world. However, this video was not produced by Nazis or Muslims, but by those who claim to be Christians.

The presentation of such material raises the question of how the message of this video is consistent with the mission statement of CaTC Young Adults, or with Munther Isaac’s description of the purpose of the conference, which was to encourage “participation in discussing the challenges of our society from a Christian perspective.”

Perhaps at least a partial explanation lies in the fact that the benign article about the conference on the website of Bethlehem Bible College was written in English, and the promotional video for the CaTC conference was produced in Arabic.

About the Author
Tricia Miller is a Senior Research Analyst with CAMERA, the Committee for Accuracy in Middle East Reporting in America. She monitors Christian organizations and media activity in relation to the Arab-Israeli conflict. She has been published in multiple online publications, and in the print edition of the Jerusalem Post's Christian Edition. Tricia has a Ph.D. in Hebrew Bible and wrote her dissertation on anti-Semitism in relation to historical interpretation of the book of Esther. The dissertation was published in July of 2014 under the title Three Versions of Esther. A second book, titled Jews and Anti-Judaism in Esther and the Church was published in May 2015, and addresses the relationship of Esther to current Christian anti-Judaism and anti-Zionism.
Related Topics
Related Posts
Comments