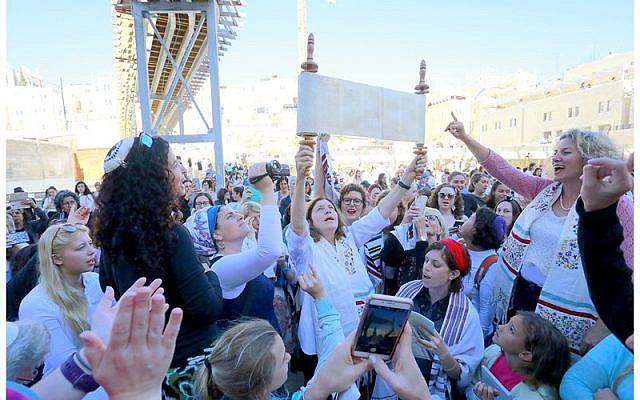 “Listen, this is a new community and I appreciate that you’re willing to help us. But for most of the members, women reading Torah is a step too far. I can’t have you reading Torah AND wearing a tallit,” said Shira.

Shira belongs to a young community in Jerusalem that recently started holding Friday night and Saturday morning Shabbat services. Some members of this group want women to participate to a certain extent, lead Kabbalat Shabbat, and even read part of the Torah portion. Like many communities, especially Orthodox ones, this young group is dealing with the problem that women, sadly enough, don’t volunteer to lead services or simply don’t know how to read from the Torah.

Encouraging women to be active in their religious life and communities is crucial to me. Therefore when Shira approached me and asked if was willing to lein part of the Torah reading, I agreed. Even though it would mean leaving my own community on Shabbat and walking half an hour, I know that it’s important for women to see other women reading from the Torah, so they see it’s possible.

“By the way,” I informed Shira, “I don’t know how you all feel about tallitot for women, but I am not willing to read Torah without a tallit.” Jewish law teaches us that when one is called up for an aliyah or to read from the Torah, they should be wrapped in a tallit. I see no reason why this wouldn’t apply to women as it does to men.

It took Shira a while to respond, and then she said she had to check with the community. “You see, for a lot of the members, it’s considered extreme even to allow women to read Torah, so if they see a woman with a tallit it could be off-putting for some of them.” She added, “Please believe that I’m with you, that you should be allowed to pray as you wish, but if I’m going to bring change to my community, I have to take baby steps here.”

The thing is, I completely understand her. A few years ago I might have even had a similar reaction. But I have now reached the point at which I don’t feel the need to apologize for praying the way I do. What’s more, I can’t sacrifice my own religious practice for the sake of those who view women in tallitot as a provocation. The dilemma of whether or not to go to this community perfectly encapsulates my internal push and pull, the struggle between patience and being true to myself.

This was not my only recent reminder that women are still fighting to participate even in modern religious spaces in Israel. During a presentation to an all-women, religious Israeli gap year group, one of the participants told me that women can’t form a minyan because the Shechina, the divine spirit, is not present with women as it is with men. Hearing that from a modern religious woman was painful. It is not my place to say how anyone should pray, but the excuse that women are somehow spiritually less than men was heartbreaking for me to hear.

Sivan is the month of Shavuot and receiving the Torah. In this month, we are reminded that we ALL received the Torah – not just men. Each and every Jewish soul was present at Mount Sinai. Long before denominations, mechitzahs, and various social pressures, we were all one Jewish people.

In my position at Women of the Wall, my work extends beyond the Kotel itself. I believe it is crucial for women to see other women doing the very things often deemed off-limits due to our gender. And what better time than Shavuot to remind women and girls that the Torah belongs to us just as much as it does to our male counterparts?

Aside from celebrating receiving the Torah, Shavuot is also when we read the Book of Ruth. Ruth is essential to Judaism because of her choice to join the Jewish people. Her legacy of choosing Judaism has been echoed throughout generations of Jewish converts, men and women alike.

How can we celebrate yet another holiday honoring one of the most important Jewish women in history, while telling women that they cannot read from the Torah, wear tallitot, or form a minyan? What if Ruth showed up to Shira’s community in a tallit, ready to be counted in a minyan and read from the Torah? Would she be seen as an extremist? When will we reach the point where women can participate fully in the Jewish experience, without being made to feel less-than, provocative, or just plain wrong? These are the questions I’m sure to be mulling over as I’m enjoying some delicious (vegan) cheesecake with my family this Shavuot.