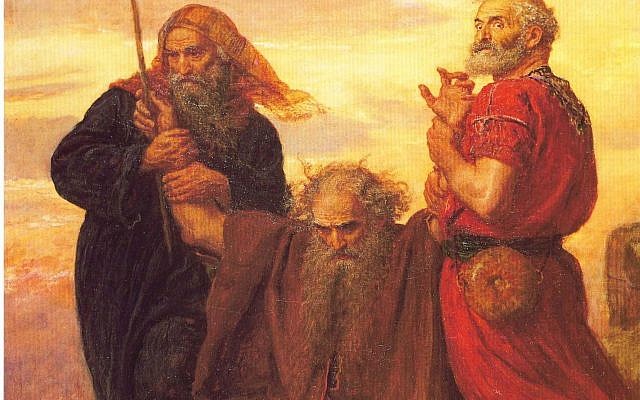 Illustrative. From 'Victory O Lord!' by John Everett Millais, 1871, depicts Moses holding up his arms during the Battle of Rephidim, assisted by Hur (left) and Aaron. (Wikipedia)

Prior to the building of the Mishkan (the Tabernacle), God tells Moses, regarding Betzalel, that “He has imbued him with the spirit of God, with wisdom, with insight, and with knowledge, and with [talent for] all manner of craftsmanship,” to facilitate building all that is needed in the Mishkan. Why would G-d specifically choose Betzalel, the grandson of Hur of all people?

Hur, we are told by the Midrash, was murdered by the nation for refusing to allow the worship of the golden calf. It would seem natural for Hur’s grandson to hold a grudge against the nation and not want to spearhead a project which would require him to deal with them on a daily basis. If God was going beyond, to specifically endow someone with special wisdom, insight, and knowledge at this juncture for the purpose of the Mishkan, why not go with someone that has no emotional interest in the game?

The Torah tells us little about Hur, but in order to understand why Betzalel was chosen, we can gain insight by analyzing that which is known about his grandfather.

Hur was mentioned in the Torah initially when the nation encountered a battle with Amalek in Refidim. Moses ascended the hill with Aaron and Hur who supported his hands to keep them raised heavenward in an expression of faith so that the nation would not be defeated by Amalek.

He next appears when Moses ascends Mount Sinai to get the Torah, leaving Aaron and Hur in charge, should the nation need assistance.

Aaron was known as a “lover and pursuer of peace” (ohev shalom ve-rodef shalom). He went to great lengths to help the nation achieve peace, even when his efforts resulted in the sin of the golden calf.

It seems that Hur was emphatic about maintaining truth (emet), even at the cost of his life. The Midrash tells us he was murdered by the people when he tried to prevent them from making the golden calf.

The nation cannot exist on peace or truth alone. Truth alone as represented by strict justice would cause the death of the nation. So too, by seeking only a peaceful existence without justice, we run the risk of veering seriously off track by accepting that which should not be tolerated. It is therefore essential to have the proper balance of the two. This balance was represented by Hur and Aaron, as they held up Moses’ hands as an expression of faith in the battle with Amalek. Moreoever, it is a battle that challenges us in every generation. Only when we support ourselves with the proper balance of truth and peace can we emerge victorious from that which threatens us.

That is why Aaron and Hur were chosen to be Moses’ support system on the hill at Refidim, as well as the ones left in charge to deal with the people at Mount Sinai. It takes a combination of these two traits to properly sustain the people, as seen in the war against Amalek. This should have been exemplified at Mount Sinai, and also when they were faced with the challenge of the golden calf.

Hur used his logic and reason in trying to deal with unruly stubborn nations demands. What the nation requested was wrong and he emphatically denied them what they felt they needed. Aaron’s heart sympathized with their needs, and he made sure to acknowledge them. He tried to work with them as best he could, for his love of people guided him.

Hur ended up murdered, and Aaron’s actions led to idolatry.

Had Aaron and Hur combined their inclinations and worked together, as they had done during the war with Amalek, perhaps they could have come up with a creative solution that would have taken into the account the needs of the people without steering them off the path.

Betzalel was Hur’s grandson and had all the potential (whether genetic or learned) of Hur, and therefore would be able to redeem his grandfather’s failure. Betzalel guided the nation and focused their energies into the construction of the Mishkan. The combination of his construction of the vessels of the Tabernacle with Aaron’s use of them for the people — in service to G-d — rectifies the parts that Aaron and Hur respectively played in enabling and abetting the golden calf.

Ideally, we should combine the logic of the mind and the desires of the heart to achieve the emotional intelligence needed to properly love and care for our people while at the same time serving God in an acceptable manner.