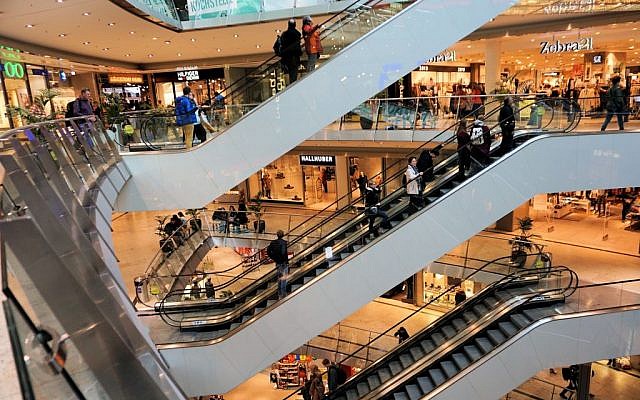 At the mall (Pixabay)

Israel is one of the most advanced countries in the Middle East, its high-tech economy a model of brain power, innovation and efficiency.

Out with the old, in with the new.

For a country with precious few natural resources, Israel has fared reasonably well thanks to its can-do, entrepreneurial spirit. If you take a walk in a well-to-do neighborhood in Tel Aviv or Jerusalem, you’ll see trendy boutiques, fine shops, fancy restaurants, chic cafes and late-model European sedans, all signs of an economy in full flight.

It’s a far cry from the lean years of the 1950s, when Israel was bogged down by austerity. It was a period when many Israelis lived in shabby shikunim and when authorities funnelled some new immigrants straight into flimsy mabarot. It was an era when only a very small minority of Israelis had the means to buy a shiny new car or go abroad on a vacation.

That era is gone now.

Israel, in 2016, is a materialistic society which has shed its socialist trappings and fully embraced capitalism. Having achieved a relatively high standard of living, Israel revels in conspicuous consumption. Even kibbutzniks have abandoned their austere way of life.

But as Israel marches forward, a disturbing proportion of Israelis have been left far behind in the dust. Beyond the glitter and gloss of north Tel Aviv, Ramat Aviv and Herzlia, beyond the gleaming skyscrapers of the Azrieli Center in central Tel Aviv, a different picture of contemporary Israel emerges, according to a report released recently by the Jerusalem-based Taub Center for Social Policy Studies.

Israel has the dubious distinction of having the highest poverty rate and the fourth worse income inequality ratio among affluent Western nations. Nearly five years after thousands of Israelis set up a tent camp on Rothschild Boulevard in the heart of Tel Aviv to protest the soaring cost of living, the Taub Center report reminds us that great improvements are needed.

Twenty two percent of Israelis, including one in three children, live below the poverty line. No other nation in the Organization for Economic Cooperation and Development, of which Israel is a member, is so mired in poverty. In 2011, when the social protest movement in Israel was in high gear, the comparable figure was 21 percent.

Poverty enmeshes a disproportionate percentage of ultra-Orthodox Jews, commonly known as haredim, and Arab women. Shockingly and unacceptably enough, only 20.9 percent of haredi males and 22.6 percent of Arab women are gainfully employed.

Far too many haredi men, dependent on government subsidies to make ends meet, prefer to while away their days in yeshivas. They’re encouraged to do so by a corrupt system in which ultra-Orthodox political parties extract enormous funds from the governing party in exchange for their support in the formation of coalition governments.

Studying Torah is no sin. But there should be a tightly-regulated cap on the number of yeshiva scholars supported by the state.

Due to age-old cultural pressures and a lack of access to jobs, a majority of Arab women stay at home, depriving the economy of potentially productive workers it cannot afford to lose. Israel’s Arab community cannot continue to live in the past and resist constructive change.

Drastic reforms are required from both the haredi and Arab communities. Israel cannot maintain its status as a regional economic powerhouse unless haredim and Arab women join the labor market in much greater numbers and start contributing to the country in a tangible manner.

Which brings us to the second point. There was a time when after-tax income inequality was a minor phenomenon in Israel. But those days are definitely gone. The gap in wages has widened considerably as Israel has morphed into a nation of haves and have-nots, of privileged and unprivileged citizens.

Perhaps some of these outcomes were inevitable after rapid development. But in the case of unemployed haredi men, the fault lies with the outmoded Israeli coalition system of government. And in the Arab community, tradition continues to trump progress, much to its detriment.

Israel cannot allow itself to be dragged down by such retrogressive forces. Israel must adopt a bold reform agenda if it is to maintain its competitive edge and give its citizens a fair chance to enrich their lives.