Two days ago, Netanyahu abruptly left a cabinet meeting on the Coronavirus, cutting it short. With a disturbing 3986 new cases reported during the week, on Thursday Netanyahu convened the Coronavirus Cabinet.

During the meeting, Benny Gantz demanded that the responsibility for leading the government’s efforts to contain the Coronavirus pandemic be transferred to the Defense Ministry’s Home Front command. This sparked what seemed to be an irrational response.  “I understand exactly what is going on here. People are playing politics. If this continues, it can only lead to one thing” he said, before storming out, threatening new elections.

“He’s becoming paranoid”, I heard someone say. “He’s losing it”, said another. But that’s not the Netanyahu I know and despise. It nagged at me, this out of character response. It is not that Netanyahu doesn’t have a penchant for melodrama, he does. But it is calculated, cynically measured, controlled. And this didn’t seem to be any of that. It had been bouncing around in my mind like a pinball – and then the penny dropped.

Ever since March, Netanyahu has been leveraging his managing of the Coronavirus crisis for his political self-promotion, and it has worked; latest polls show that if elections were to be held today, the Likud and his right-wing partners would get 64 seats and Gantz’s Blue-White party wouldn’t even break double figures, “in Gantzen”.

Let us go back to the situation in March. The election results were inconclusive but pretty momentous. Gantz did not win, but Bibi definitely lost. He could not cobble together more than 58 seats for a coalition and the possibility of getting 3 MKs to defect was too big an ask. But, that is not what was momentous. What was momentous is that he had lost the legislative initiative and the ability to set the Knesset’s agenda. With 62 seats united against him, the opposition was poised to unseat Edelstein, Bibi’s loyal Knesset Speaker, and install someone from their ranks. For the first time in more than a decade, Bibi would no longer be able to dominate the narrative or block the progress of legislation against his interests – especially bills which could prevent him from being Prime Minister during his trial, which he badly needs as a pulpit to undermine the authority of the Courts. He was desperate.

And then the Coronavirus arrived, like a raft to cling to in a stormy sea. With typical Netanyahuesque foresight, he identified both the enormous, destructive danger of this pandemic and the need to act quickly and decisively, and the opportunity to extricate himself from his political predicament. Netanyahu never was one to miss such an opportunity, and he is always at his best when he can align his personal interests with what the country needs – and we certainly needed decisive leadership, which he provided. Night after night, the Prime Minister held press conferences, providing that leadership – but also indulging in no small amount of self-promotion, placing himself front and center as the country’s only savior, which bolstered the impression of his indispensability, which he milked for all that it was worth. 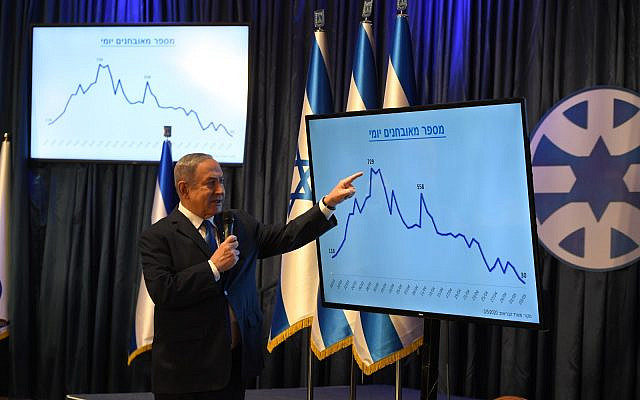 On March 12, Netanyahu called for the formation of an emergency unity government to help fight COVID-19. At the time we had 110 confirmed cases. By March 27, Israel had 2951 cases, with 450 to 500 new cases per day. Not only was the number of Corona cases spiking, so was Netanyahu’s popularity. With the political impasse threatening a fourth round of elections and Netanyahu resurgent in the polls, promising clear victory for the Likud and the right-wing bloc, Gantz capitulated, betrayed his voters and agreed to form a unity government. In so doing, he not only reneged on every campaign promise he had made, and every moral public stance he took, he betrayed his voters’ trust and left the center-left camp decimated, leaderless, and abandoned. In one afternoon, he managed to do what Netanyahu had not managed to do in an entire year and three election campaigns. But more than that, he gave up without a fight everything he had gained – the position of Knesset Speaker, the legislative initiative and control of the agenda – everything that Netanyahu needed to continue to reign supreme and had lost in the election.

THIS is the context in which we must now view what transpired at the Corona Cabinet on July 2: When Gantz demanded that “Every operational matter should go to the Home Front Command and the Defense Ministry. We need to move to a model of decision-making under which political decisions are made by the cabinet, the Health Ministry sets the regulations, and the Defense Ministry is the body which implements them”, what Netanyahu saw, was an initiative by Gantz to glean glory from managing the Coronavirus crisis as Defense Minister, depriving him of his golden goose. When he said, “People are playing politics”, what he meant was he thought that Gantz was looking to do what he himself had been doing for the last three months – and there was no way that he was going to allow that.

Looking at the situation objectively, The Homefront Command is probably the only body we have at the moment which is equipped to deal with a national humanitarian crisis of such proportions. Not only does it have the personpower, the training, and the logistical infrastructure to be able to deal with such a widespread pandemic, but it also has the resources and the efficiency built on years of experience to do so quickly and effectively. One only needs to think back to the First Gulf War in 199O and the speed with which they equipped every Israeli citizen with gas masks to understand the effectiveness of the performance of the tasks they undertake. And this is exactly what we need right now. It should be the logical choice.

However – and this is important to understand – The Homefront Command is ultimately commanded by the Minister of Defense, Gantz, whom Bibi trusts about as much as much he trusts a viper, and he is not about to give Gantz even a glint of the opportunity to garner praise for a job well done.

Instead, Bibi pushed for the Shabak to track and follow Israeli citizens suspected of carrying the virus. The reason is clear; the Shabak works out of the Prime Minister’s Office. They report directly to him. Let that sink in. Netanyahu wants to employ the country’s secret police, Israel’s counterespionage, and counter-terrorism unit to track its own citizens. He is prepared to violate our democratic right to privacy, rather than have the unit best suited to deal with a crisis of this magnitude to operate so that he – and only he – can control it. Once again, Netanyahu places his own interests before those of the country. 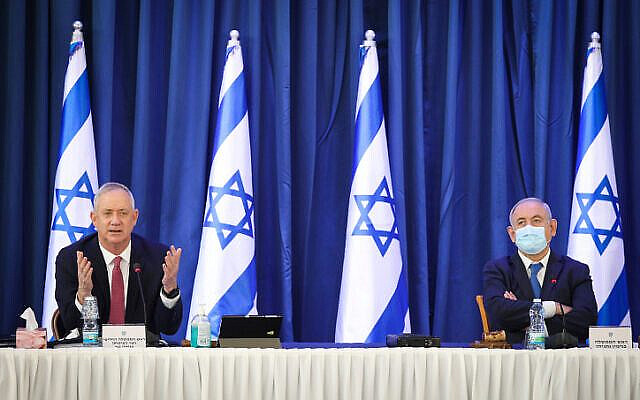 Finally, I want to address Netanyahu’s threat of another election. On March 12, Netanyahu called for an emergency unity government. At the time, Israel had barely 110 cases. On July 2, the day of the Cabinet meeting where Netanyahu made his threat, Israel recorded 28055 confirmed cases, 1107 in the last 24 hours, the highest by far since the outbreak. It is beginning to look like the pandemic is out of our control. At the same time, the economic effects are also spiraling out of control. We have not even begun to fathom the extent of the damage it has done. Unemployment is at 21% and independent businesses are collapsing, unable to even cover their monthly fixed costs. And now, suddenly the crisis doesn’t mandate an emergency unity government anymore and we can afford to spend another 2 billion shekels on yet another election campaign? Why? Because Netanyahu refuses to allow anyone else to manage the crisis besides him? Because he thinks he will get 64 seats and will no longer have a need for Gantz to stay in power? Who is “playing politics”, now?

We all witnessed how cynically expedient Netanyahu could be when he delayed the release of news about Zacharia Baumel z”l’s remains being returned to us because it suited his election campaign. The difference is now he is being expedient with citizen’s lives in the middle of a pandemic, for his ego and his political ambitions.

When is enough, enough?