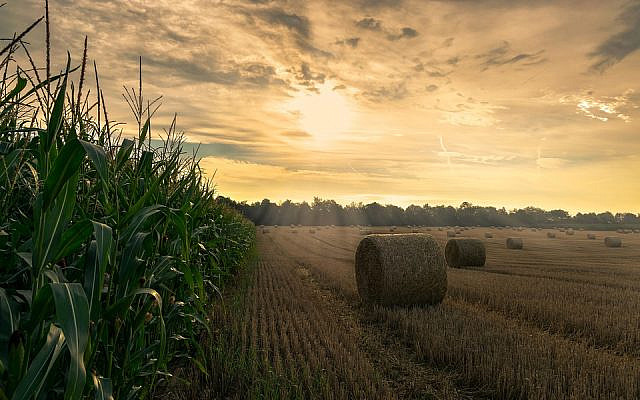 According to the Midrashic works Chuppas Eliyahu and Pirkei Rabbeinu HaKadosh, there are eight Hebrew words for “food:” ochel, dagan, shever, tevuah, tenuvah, yevul, bar, and mazon. As we shall see in this essay, these words are not totally synonymous. Rather, some are more general words for “food,” while others are more specific types of “food.” Some words focus on certain aspects of “food,” while others focus on other aspects of “food.” Let’s begin.

Ochel/maachal is the most general of the words in question. Its root ALEPH-KAF-LAMMED refers to “eating,” and as such, ochel refers to anything which is “eaten.” Many grammarians have pointed out that this root does not just refer to “eating” but to any form of “consumption” or “destruction,” such as by fire (Ex. 3:2, 24:17) or sword (Deut. 32:42 and Jer. 46:10). In fact, Rabbi Shlomo Pappenheim of Breslau (1740-1814) actually traces ochel to the two-letter root KAF-LAMMED, which refers to utter destruction (kilayon).

Mazon is a bit less vague as it refers to a specific type of food (Gen. 45:23) — healthy food. That is, food which provides the “sustenance” that satisfies one’s bodily needs. Its root is either ZAYIN-NUN (according to Menachem Ibn Saruk and Rabbi Pappenheim) or ZAYIN-VAV-NUN (Ibn Chayyuj, Ibn Janach, and Radak), but all unanimously agree as to its general meaning.

The root of yevul is also subject to dispute, with some arguing that it is BET-LAMMED (Ibn Saruk and Rabbi Pappenheim), and others, that it is YUD-BET-LAMMED (Ibn Janach and Radak). Rabbi Pappenheim explains that BET-LAMMED refers to various forms of “decomposition” and offers two ways of fitting yevul into this definition: In Yerios Shlomo he explains that all produce is called yevul because the seeds “decompose” in order to give way to what grows from them. In Cheshek Shlomo he argues that especially perishable produce is called yevul because it can easily “decompose” if proper care is not taken.

Rabbi Shlomo Aharon Wertheimer (1866-1935) writes that tevuah’s rootis BET-ALEPH, which means “coming/bringing,” and refers to any produce which “comes forth” from a seed or tree. The word tevuah was borrowed to refer to the results (i.e. “fruits) of any action or behavior (e.g. Prov. 3:14, 18:20, 10:15). Rabbi Wertheimer notes that produce can be called tevuah even before it is fully ripe and even if it is still attached to the ground, as long as it is at least one-third mature (see the Jerusalem Talmud Kelayim 7:5).

Ibn Janach writes that produce is called tevuah becomes it “comes” at certain times of the year. Interestingly, Targum Onkelos (to Gen. 41:35, 42:1, Deut. 2:28, 7:13) translates ochel, bar, shever, and dagan into the same Aramaic word avur (which has a Hebrew form that appears in Joshua 5:11). Just as Targum Onkelos does not differentiate between shever and bar, neither does Targum Yonatan to Amos 8:5, translating both words in the same verse as avur. Radak (to Joshua 5:11 and in Sefer HaShorashim) explains that avur is related to the word avar (“past”), and refers to grain which grew in previous years, while tevuah is related to the word ba (“coming”) and refers to grain from the current year. Rabbi Samson Raphael Hirsch (1808-1888) explains that tevuah is related to “bringing” because it is the choicest type of produce, the type that a farmer would want to “bring” into his house.

Rabbi Wertheimer explains that dagan refers specifically to the five grains (simplistically-speaking, wheat, barley, oats, spelt, and rye), and only after they have been ripened, reaped, and put into a smooth pile (see Rashi to Berachot 47b). As an aside, Rabbi Yehuda HaChassid notes that the word dagan in gematria equals the numeric value of the word ochel (both amount to 57).

Rabbi Pappenheim explains that tenuvah refers specifically to ripe produce (Deut. 32:13). Its root NUN-(VAV)-BET refers to fully-developed products, both agricultural and verbal. This is why the expression niv sefatayim (Isa. 57:19) — literally “the product of the lips” — refers to especially well-developed speech.

Rabbi Pappenheim explains that BET-REISH, the two-letter root of bar, refers to “separation” or “exclusion.” For example, the word bar also means “son” because the child is “separated” from his mother’s body via childbirth. Similarly, bor/borit is a cleaning agent used to “separate” and “exclude” filth, and bari/barah refers to a sort of clarity/certainty by which all other options have been conclusively “excluded.” In terms of food, bar refers to grains which have already been “separated” from their chaff.

Rabbi Yitzchok of Volozhin (1780-1849) likewise writes that bar literally means “chosen” or “refined” because it denotes grain without the chaff (see also Nachmanides to Gen. 41:49). He explains that Yosef told the Egyptians to store the grain without its chaff (Gen. 41:35), because otherwise they would not have had enough storage space for everything.

In the King James Version of the Bible, the Hebrew word bar is translated into English as “corn.” However, this does not refer to that yellow stuff commonly found on the cob. Rather, the English word “corn” originally meant “grain with the seed still inside,” and commonly referred to whatever staple grain was used in a given location. After the discovery of the Americas, the word “corn” eventually became almost exclusively associated with what we colloquially call “corn” (aka maize in the relevant Native American languages).

The word shever seems to be derived from the triliteral root SHIN-BET-REISH, which means “breaking.” Radak (to Amos 8:5, Gen. 41:56, and in Sefer HaShorashim) and Meiri (to Prov. 10:3) explain that produce is called shever because it “breaks” the famine. Most instances of such usage in the Bible occur in the story of Joseph and his brothers, where Joseph instructed the Egyptians to save food to sustain them during the famine. Rabbi Yechezkel Weinfeld of Ramat Eshkol compares the Hebrew word shever, which “breaks” a famine, to the English term breakfast — that delightful meal which people eat in the morning, which “breaks” the nightly “fast.”

Peirush HaRokeach connects shever with sever (“hope”), because people look towards G-d trustingly and hopefully, while He provides them with food (see Ps. 145:15).

Menachem Ibn Saruk, Peirush HaRokeach, and Rabbeinu Bachaya all write that shever refers to food as a commodity that is bought. Rabbeinu Bachaya even writes that the term shever implies a “sale.” This is seen in Rabbinic Hebrew, where shover means “receipt,” which attests to payment and thus “breaks” a litigant’s ability to claim a debt. In Modern Hebrew shover means “voucher,” while the word kabbalah means “receipt.”

Rabbi Avraham Rivlin points out that shever denotes both “breaking/destruction,” but also “building/sustaining,” for it is the sustenance which keeps people alive. This is yet another example of a word in Hebrew which has two diametrically opposed meanings.

Rabbeinu Bachaya notes that when Yaakov asked his sons to bring food from Egypt, he used the word shever, but not ochel or bar, because shever implies the edible grain along with the chaff. This was to allude to Yaakov’s sons that in the future they would endure bad times (the chaff) in the form of exile when they would be “broken” as a people, along with the good times (the grain).

Thus, ochel and mazon are general words for “food”, while dagan and bar are threshed and winnowed “grain”. The remaining four words mean “produce” in general, each with its own implications: Yevul is perishable, tenuvah must be ripe but tevuah does not, and shever is produce purchased in times of famine.