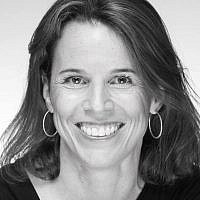 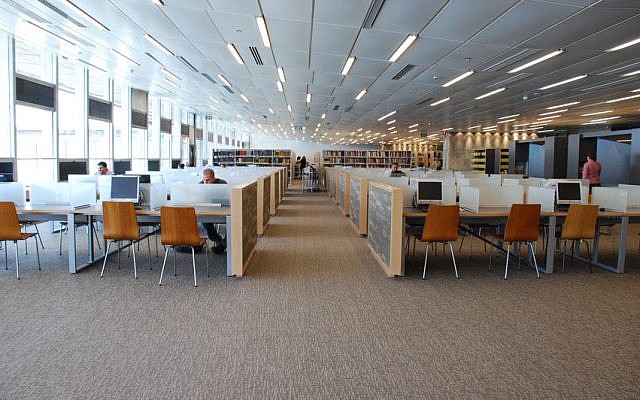 Amid the rise of e-books, social media, and other forms of digital content, you might think the brick-and-mortar library is nearing its demise.

According to a study conducted in 2016 by the Pew Research Center, 78 percent of Americans think public libraries help them find information that is trustworthy and reliable, 76 percent agree libraries help them learn new things, and 56 percent say libraries help them obtain information that helps them make decisions. What’s arguably even more significant is that the youngest respondents —those between the ages of 18 and 35 at the time of the survey — were the most enthusiastic about libraries, agreeing with the aforementioned statements at rates of 87 percent, 85 percent, and 63 percent, respectively. Indeed, a generation which you’d assume would be more inclined than its predecessors to be wedded to modern technology actually has a deeper appreciation for “old school” content, at least when it comes to the library setting.

These findings came to mind after a recent lunch at University of Haifa with the Nazarian family, the funders of one of Israel’s largest libraries, and many others involved with our regionally acclaimed Library. In supporting the expansion and renovation of the Younes and Soraya Nazarian Library, this family from Los Angeles did much more than support conventional scholarship in an academic setting; they bolstered one of the most critical pillars of democracy. 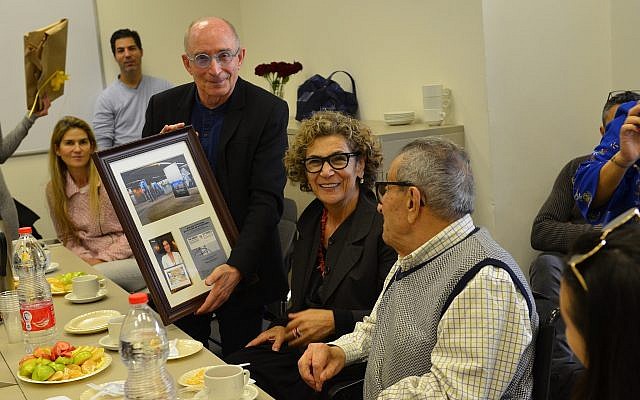 University of Haifa president Prof. Ron Robin honors Younes and Soraya Nazarian with a plaque commemorating the family’s contributions to the University.

As University of Haifa’s psychological warfare expert Dr. Yaniv Levyatan has explained, the phenomenon of “fake news” has created a situation in which we essentially can no longer believe anyone or anything, since we have no way of evaluating the credibility of the flood of information we encounter. Many people fail to appreciate that 50 percent of online traffic is made up of bots performing various actions, including the production of fake news.

“This does not happen for no reason, and of course there are those who benefit from this situation and want to see it continue. This creates a serious challenge for the future of democracies,” Levyatan says.

Levyatan teaches a University of Haifa course on fake news in which students watch excerpts from the movie “1984,” based on George Orwell’s novel of the same name. Yet alarmingly, modern societies have already reached a place which Orwell couldn’t even have imagined.

“In 1984, the authorities control us mainly through the ‘telescreen,’ which can see what we are doing. Today’s technological devices, which we use of our own free will — such as the smartphone and social networks — allow the elite to penetrate our minds,” explains Levyatan.

What’s our best defense against this high-tech threat to democracy and free will? In this bibliophile’s estimation, it’s the low-tech book — especially primary source volumes containing the firsthand, eyewitness accounts to history which will live on forever. These books remain the closest thing we possess to completely verifiable information. They help us discern fact from fiction. They still form the foundation for much of today’s academic scholarship and perhaps more importantly, one of the bedrocks of democracy. Our libraries, then, are among the cradles of democracy.

Expanded to its current size in May 2011, the Younes and Soraya Nazarian Library is a central academic library serving the research and teaching needs of all Faculties and programs at University of Haifa. Its 16,000-square-meter (172,000-square-foot) building is home to more than 2.5 million print and electronic items, including over 43,500 journal titles, 1.1 million books, 8,000 theses, 106,000 digital images, 23,300 maps, 750 databases, 22,100 visual and audio media titles. The library initiates and focuses on the development, digitization, and preservation of special collections, such as dissertations, faculty research publications, historical photographs of the land of Israel, and archives of Israeli theater and performing arts. On January 10, Younes and Soraya Nazarian visited the library for the seventh anniversary of the renovations and expansion.

It’s the digitization effort that particularly encapsulates the Nazarian Library’s unique role and vision. The library maintains an important balance between tradition and modernity by on the one hand housing over a million books, but on the other understanding that digitization is the wave of the future and, actually, a new and more advanced method of preserving the past.

More broadly, the institution of the library strikes a similar balance worldwide today — ensuring our connection to centuries and millennia of human history, while providing a crucial framework for a present which can hopefully be more informed by real information than fake news.