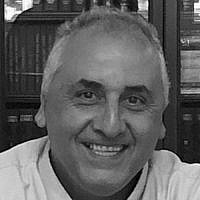 The Blogs
Doron Danino
Apply for a Blog
Please note that the posts on The Blogs are contributed by third parties. The opinions, facts and any media content in them are presented solely by the authors, and neither The Times of Israel nor its partners assume any responsibility for them. Please contact us in case of abuse. In case of abuse,
Report this post.

As President-Elect Biden’s team prepares to craft a policy toward the Israeli-Palestinian conflict it should make a strong effort to consult with and involve Israeli and Arab religious hawks. This would help it secure much needed support in Israel, among Republicans as well as from Palestinians and Arabs.

The dire need in doing so is evident when one examines the history of U.S.-led peacemaking to date.

Madrid, 2011, Israelis, Palestinians, and Europeans gather in a magnificent hall. The atmosphere is festive, the prestigious refreshments served to everyone and eaten by all attendees include glasses of champagne and small sandwiches decorated with pork. The conference marks the twentieth anniversary of the 1991 Madrid Conference: an international conference on Middle East peace convened by the US and the Soviet Union, uniquely attended by the leaders of almost all Arab countries, along with Israeli leaders. The menu would not have been pertinent were it not for a meeting between Israeli and Palestinian leaders, who sought to resolve a bloody century-old conflict over the Land of Israel in general and Jerusalem and the Temple Mount in particular — a sacred land, city and site with very deep religious significance for Jews and Muslims alike.

With a 25 year perspective one can say that the Oslo Accords entirely failed achieving its architects’ goals. The Right in general and the religious parties in particular are deeply rooted in Israeli governments, among Palestinians Hamas has grown stronger and Fatah weaker, while the Islamic movement has become predominant on the Israeli Arab street. Israeli politics is increasingly aware of what my friends Ofer Zalzberg and Roie Ravitzky wrote: “It is insufficient to instrumentally harness members of a competing camp to secure an approval for a precooked path. Israeli society needs a new conversation about possible peace. A conversation through which disputants can form competing justifications within their disparate worldviews in order to support a new political reality. For such a conversation to be possible, each party ought to seek what is possible within the other’s view and perspective, rather than the most effective scheme to win him over and establish facts despite his opposition. In the intra-Israeli sense, peace cannot exist when one camp inflicts defeat on another. There is no value to an agreement which shatters the dream of a significant part of the Israeli public, destroys their worldview or ruins its Israeli-Zionist tale”. The same goes when turning our eyes to the neighbors – a durable agreement cannot rely on the decision of a dictatorial leader or on an incidental majority in parliament” that for many years has not been elected in a democratic process.

Contrary to what the media and interested outside parties try to depict, reality proves time and time again that the Israeli public is religiously motivated. For it the question of the Land of Israel is not a real estate question, and the Temple Mount is not just a historic or political site but the nation’s heart and the site of its longing for many generations. Things are similar on the Arab side: “Ard Al-Mukadasa” is not mere real estate where territorial compromise is easy, and the Al-Aqsa Mosque is not just one mosque among many.

So far our Muslim neighbors have only encountered secular Israeli views, or at most those of religious groups from Israel’s political left. In each such meeting they learned that the Israeli public with whom they have met supports their national aspiration, or at least understands this aspiration and is willing to compromise on the Land of Israel to achieve peace. The Israeli side also met only with Muslims who laud peace, truly or falsely. How disappointed both sides have been that despite the mutual agreements no progress has been achieved.

To rectify this deficit, one must bring together right-wing and nationalist religious authorities, Jewish and Muslim. Even if these would be tense meetings, the truth emerging from them will lead to a real chance for a solution. I have the gratifying privilege of being among the pioneers in this field in recent years.

It should be clear to any statesman and politician that in order for a policy to receive broad, stable and durable support, it requires four components, three of whom were aptly identified by Ofer Zalzberg and Roie Ravitzky: “first, to allow multiple concurrent justifications and reasons to support government policy; second, to actively strive that holders of competing worldviews will formulate justifications that fit their perspectives; third, that policy makers ask themselves what steps might be congruent with the disparate, pertinent political theologies”, and finally, to be open to the notion that peace arrangements can be very creative, and meet religious and historical aspirations.

In any case, for such arrangements to become a reality, we must all accept the fact that they may be different from what has been established in the Israeli, Arab and international consciousness – two states for two peoples based on the 1967 lines.

About the Author
Rabbi Dr. Doron Danino, 50, is married to Hila and has four children. A resident of the Galilee, he is a lecturer at Bar Ilan University and a researcher of North African Jewry. Rabbi Danino is a member of Rabbinical Council of Tzohar, and is currently a Senior Advisor at the Herbert Kelman Institute for Conflict Transformation and Head of the Religious Zionist Department at the Citizen Accord Forum.
Related Topics
Related Posts
Comments