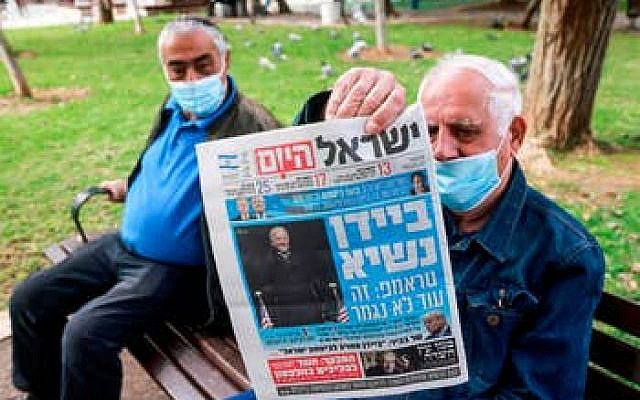 An Israeli man holds up an "Israel Today" newspaper that reads "President Biden, Trump: This is not over" on November 8, 2020 (taken from Haaretz https://www.haaretz.com/israel-news/.premium-to-trump-trained-israeli-ears-biden-s-rhetoric-sounds-alien-and-potentially-hostile-1.9297881)

As the time of Trump’s administration comes to a close, we are reminded of all that divides us, especially in the wake of the Capitol storming that occurred just a few weeks ago. For the past 10 months, I have remained in Israel and watched all the events over the past year unfold in my home country from the comfort of my apartment some 6,000 miles away, oftentimes not living with Americans that could share in my emotional reactions to the news.

As an American living in Israel, however, I can’t help but think about how the perception of Israel has visibly changed in liberal, actively anti-Trump circles. During Trump’s administration, I have repeatedly told my friends that the longer both Trump and Netanyahu stay in power, the more the American left-wing will associate Israel with Trump and exclusively perceive it as an entity of the right-wing, despite the State of Israel having a variety of diverse voices among its citizens and within its government.

No longer do many Americans automatically recognize that AIPAC does not officially have a political affiliation, even though it has tended to side with more right-wing Israeli policies the past few decades, and more often than not, AIPAC bears the bulk of criticism for America’s support of Israel. Former presidential nominee Bernie Sanders, an American Jew himself, even declined the open invitation, which is extended to a number of politicians with varying political views and to all presidential nominees, to attend the AIPAC conference. The average American understandably assumes, therefore, that the largest Jewish pro-Israel lobby wields the most political power in maintaining a strong US-Israel relationship.

Nonetheless, the vast majority of people who are quick to criticize American support for Israel tend to focus on AIPAC and the domestic Jewish community, which wavers around six million in number, without considering the nearly 100 million Evangelical Christians who see the complete “Judaification” of Israel as the key first step to usher in the messianic age and the Second Coming of Jesus. Trump himself admitted, however, that he decided to move the US embassy to Jerusalem “for the evangelicals,” considering that the Evangelical Christian voting block in the US overwhelmingly votes Republican and supports aggressively pro-Israel policies, more often than not at the expense of Palestinians.

As part of a recent trend, spanning from the end of the 20th century and gaining strength with each passing year, right-wing Israeli political parties along with more religiously observant Jews have come to embrace Evangelical Christians in their support of Israel. Even though Evangelical Christians zealously support the radical position for immigration of all Jews to Israel (negating the Diaspora while also making the State of Israel 100% Jewish) and the complete Israeli control of the West Bank and Gaza Strip as the stepping stone to the End of Times, they believe that the vast majority of Israel’s Jews will die during this final apocalyptic battle and only a small portion will survive, who will then accept Jesus as the messiah. With the majority of American Jews self-identifying as liberal, this relatively new “alliance” alienates them from the State of Israel and Zionism in general, due to the association with radical right-wing policies and religious fanaticism.

Luckily for American Jews and Israel, soon-to-be President Biden has outwardly supported Israel over the course of his career, even receiving the Herzl Award from the World Jewish Congress in 2016 as vice president under Obama, and has assured his Jewish supporters that he will continue to stand with Israel. Liberal American Jews have not had to face an openly more critical Democratic presidential candidate towards Israel, yet. Hopefully, growing trend for partisanship of Israel will not lead to a political split within the American Jewish community as the issue of abortion did for the American Catholic community after the Roe v. Wade (1973) ruling. Either to the dismay of some or the applause of others, President-elect Biden will also take a more cautious approach to the Israeli-Palestinian Conflict, unlike his predecessor, and looks forward to progressing the historical American-Israeli relationship. Personally, I hope that President-elect Joe Biden can resurrect the Democratic party’s public support for Israel, of course not blindly and still allowing for appropriate criticism, as we enter Inauguration Day.

About the Author
Catherine Szkop is a first generation Polish American with Jewish roots from the US, specifically Michigan, currently living in Israel as a graduate student in Jewish Studies focusing on Medieval to modern Polish-Jewish history as well as Israeli sociology at the Hebrew University in Jerusalem. She decided to move to Israel in order to connect with her Jewish ancestry and with the people who come from many different backgrounds, but all live in this small, yet dynamic region.
Comments