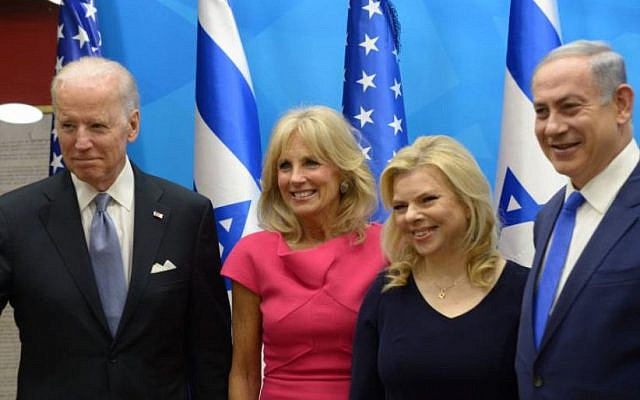 The Bidens and the Netanyahus on one of the Vice President's visits. (Israel Government Press Office)

President-elect Biden worries some friends of Israel because of a maelstrom the White House created over settlements announced as Vice President Biden arrived in Israel on March 8, 2010. By the time he left, Biden and Prime Minister Netanyahu had calmed the storm. But the Obama White House wanted a crisis.

Lessons to learn a decade later.

On March 8, 2010, Vice President Joe Biden arrived in Israel and was told of an administrative announcement by the Ministry of Interior approving one of the first stages toward the construction of 1,600 apartments in the Ramat Shlomo neighborhood in northern Jerusalem. The perfunctory announcement represented no dramatic change of policy or diplomatic message. But the Americans responded as if it was a deliberate high-level slap in the face, and the Israeli government apologized profusely and repeatedly.

After two days of condemnations from the White House and the State Department followed by Israel’s deep apologies, it appeared that the crisis was over. On March 11, 2010, the press reported that Biden “attempted to soothe tensions in a speech extolling the countries’ close relationship, signaling the U.S. wants to move beyond an embarrassing diplomatic spat over settlements that tarnished his three-day visit.”

Biden noted that the prime minister had “clarified that the beginning of actual construction on this particular project would likely take several years. … That’s significant because it gives negotiators the time to resolve this as well as other outstanding issues.” Press accounts reported that Netanyahu had called Biden on Thursday morning, “and both agreed the crisis is behind them.”

On March 12, 2010, in a move coordinated with the White House, Secretary of State Hillary Clinton unleashed a 43-minute telephone harangue of Prime Minister Netanyahu. Clinton called the settlement approval an “insult to the United States” and a “deeply negative signal about Israel’s approach to the bilateral relationship … which had undermined trust and confidence in the peace process.” The State Department spokesman said Clinton stressed that “the Israeli government needed to demonstrate not just through words, but through specific actions, that they are committed to this relationship and to the peace process.” 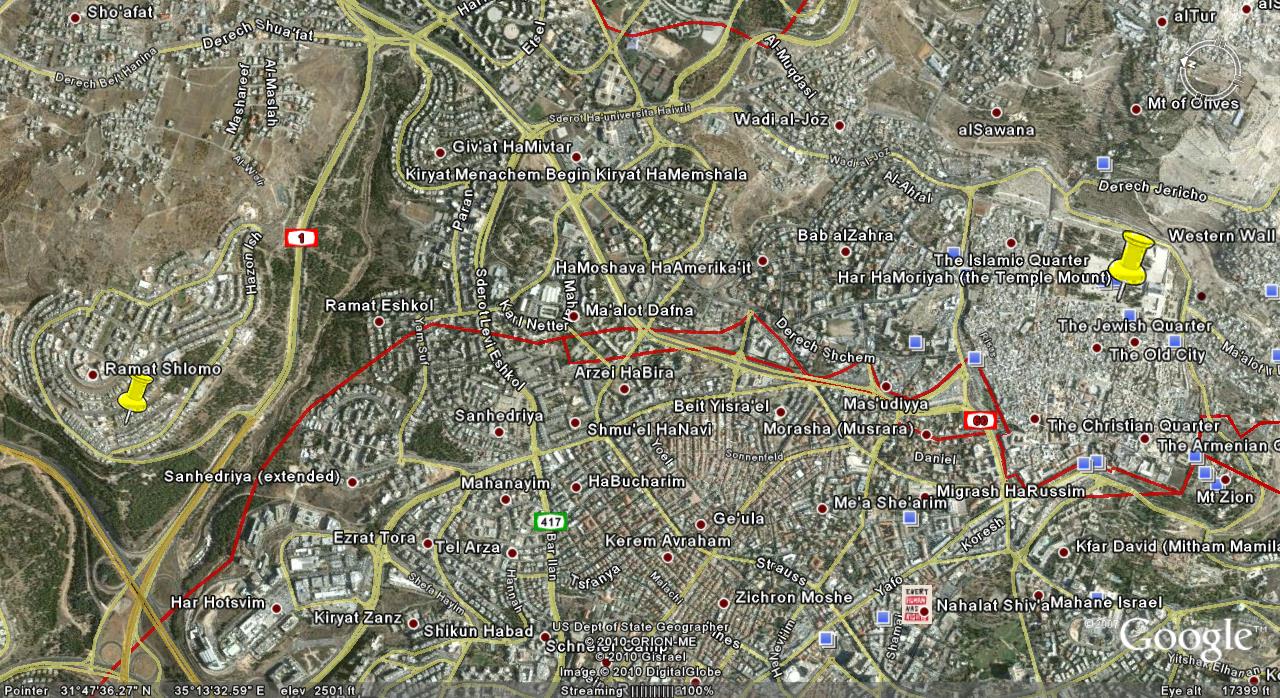 The “guilty” Jerusalem neighborhood of Ramat Shlomo, a few hundred meters from the 1948 armistice line and adjacent to Sanhedria. (Google Earth)

On March 13, Netanyahu convened a meeting of his inner cabinet to discuss the Clinton call and to announce that he was establishing a government committee to oversee building announcements. On March 14, Netanyahu discussed the issue with the full cabinet and declared that the incident was “regrettable and should not have taken place.” Ostensibly, the crisis was over, at least as far as Israel was concerned.

Yet the White House Had Other Plans.

Hours later, presidential adviser David Axelrod went on Sunday’s TV news shows to attack the settlement decision. He said it was “very destructive … an affront … an insult. … What it did was it made more difficult a very difficult process.”

Over the next few days, anti-Israel and critical columnists and bloggers unleashed their venom against Israel. On March 15, the New York Times’ Roger Cohen wrote:

President Barack Obama was furious. In a top-down administration like this one, you don’t get Secretary of State Hillary Clinton lambasting Netanyahu for 43 minutes and David Axelrod, a senior White House adviser, speaking of “an affront” and “an insult” and a “very, very destructive” step if America’s measured leader is not immeasurably incensed. … Netanyahu’s apology is not enough. The United States is asking for “specific actions.”

A fire that was supposedly extinguished flared up again and again.

Clearly, while Biden and Netanyahu were making up, in the White House a decision was made to apply Chief of Staff Rahm Emanuel’s famous strategy for crisis management:

“You never want a serious crisis to go to waste, and what I mean by that is an opportunity to do things that you didn’t think you could do before.”

The 1,600 Jerusalem apartments would become the anvil on which the administration would forge a pliant Israel. The message would have to be amplified, and for the White House, the young, pro-Obama, purportedly pro-Israel J Street was a perfect vehicle.

On March 11, and then again on March 12, the logs show Ben-Ami set a meeting for March 15 in the Old Executive Office Building with Danielle Borrin, who served on the vice president’s staff and in Jarrett’s office. On March 17, another meeting was set in the West Wing, the White House’s inner sanctum, for the next day with Tina Tchen, Jarrett’s principal deputy and director of the White House Office of Public Engagement.

On March 15, the day it met with Borrin, J Street issued a statement on the “escalation of U.S.-Israel tensions” warning that Israel’s “provocative actions undermine the peace process” and weaken the American attempts “to build a broad international coalition to address the Iranian nuclear program.” Parroting Emanuel’s strategy for crisis management, the J Street memo declared:

“Bold American leadership is needed now to turn this crisis into a real opportunity to end the Israeli-Palestinian conflict.”

Four days after meeting with Tchen, J Street published an advertisement in the New York Times to push for White House activism:

Using a football term, J Street promoted itself as “Obama’s blocking back.” The attempt by the White House and J Street in March 2010 to run over Israel after the Ramat Shlomo housing fumble was stopped well before the goal line. On March 27, three-quarters of the House of Representatives — some 337 members — sent a bipartisan letter to Secretary of State Hillary Clinton expressing solid support for Israel and voicing the expectation that differences between Jerusalem and Washington will be smoothed over quickly and in private.

A week later, the Senate followed with its letter of support signed by 76 members:

We recognize that our government and the Government of Israel will not always agree on particular issues in the peace process. But such differences are best resolved amicably and in a manner that befits longstanding strategic allies. We must never forget the depth and breadth of our alliance and always do our utmost to reinforce a relationship that has benefited both nations for more than six decades.

Lessons for the Future? 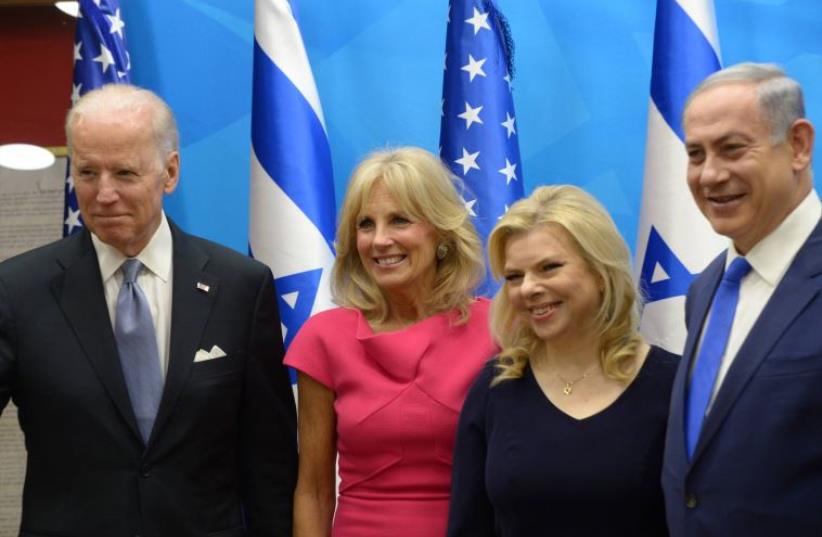 The Bidens and the Netanyahus on one of the Vice President’s visits. (Israel Government Press Office)