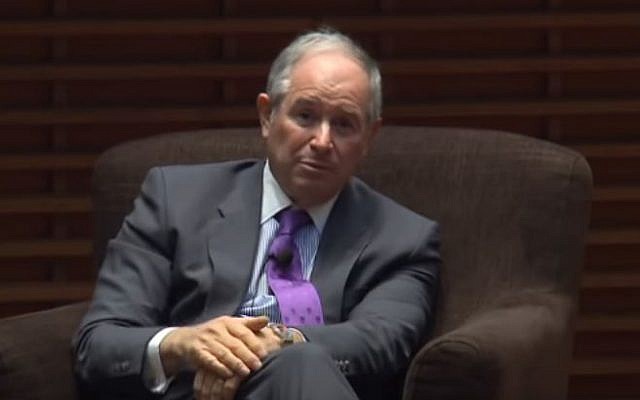 A friend with a Jewish background who just returned from her first visit to Israel was struck both by the beauty of Jerusalem the fact that every modern building and even the open spaces are splattered with the names of mostly American philanthropists. Big givers generally prefer to donate to something tangible that will live on after them.

I was reminded of the urge for donors to see their name in lights by the donation to Oxford University of £150 million by US private equity baron Stephen Schwarzman of Blackstone. Oxford has described it as the biggest private endowment since the renaissance. In exchange for his generosity, a new building, scheduled to be built close to Blavatnik School of Government, will be known as the Schwarzman Centre for the Humanities. It will twin with the Schwarzman College of Computing at the Massachusetts Institute of Technology.

The list of recent ‘mega-donors’ to Oxford is testimony to Jewish values of philanthropy. The telecoms tycoon Len Blavatnik donated some £80m to Oxford in 2012. The Oxford educated, Welsh born, tech-financier Michael Moritz donated £75m in 2012. Another Jewish financier David Harding of Winton Capital, made a record gift of £100m to Cambridge earlier this year.

In terms of Britain’s post-Brexit economic future, these gifts must be considered vital. The UK has four out of the top 10 research universities in the world. There are none in the top 20 anywhere in Europe. In spite of the generosity of these endowments, they don’t always attract great applause. There will be Jewish charities that will argue that generosity starts at home, although most of these mega-donors do their bit for Jewish and Israeli causes too.

But not everyone welcomes the new philanthropists. Tech champion Martha Lane Fox wrote on Twitter that Schwarzman’s gift would have been better spent on climate change. The Financial Times columnist Brooke Masters noted Schwarzman is a big advocate of what is known in finance as ‘carried interest’ that offers a handsome tax break. And since all charitable donations, in the UK and US, are tax deductible, it might not be quite as munificent as it seems.

Indeed, the biggest threat to donations is ethical. Schwarzman’s private equity group came under intense scrutiny in 2006 after the collapse of the quoted care home operator Southern Cross leaving 31,000 residents in the lurch. During its brief period of ownership, Blackstone extracted some £1bn from the enterprise.

The danger of being caught in an ethical bind is well illustrated by other recent events. The Canadian philanthropist Yana Peel, wife of private equity executive Stephen Peel, stepped down as head of London’s Serpentine Gallery in Hyde Park, after it was disclosed she held a share stake in NSO, an Israeli spyware company whose software allegedly was deployed against a friend of Jamal Khashoggi, the Washington Post journalist who deid at the hands of the Saudi Arabia. Peel has described the criticism as ‘misguided.’

The Sackler Trust suspended a £1m donation to London’s National Portrait Gallery after some trustees and friends raised questions about the source of the funding, which largely comes from the pharma industry. The company allegedly stands at the centre the opioid epidemic in the United States.

It is terrific so many North American donors reach beyond the US and Israel to stamp their names on British learning and culture. But in these hypersensitive days of political correctness, even the biggest, most generous and important donations can become enmeshed in controversy. I know of at least one very wealthy, respectable business donor who prefers to give anonymously precisely for that reason. The rabbis knew what they were talking about when they ruled that the most worthy form of giving  is that which is not asked for and for which gratitude is not required.