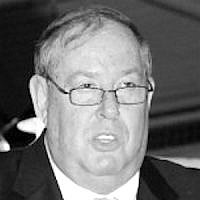 The Blogs
Haggai Carmon
Apply for a Blog
Advertisement
Please note that the posts on The Blogs are contributed by third parties. The opinions, facts and any media content in them are presented solely by the authors, and neither The Times of Israel nor its partners assume any responsibility for them. Please contact us in case of abuse. In case of abuse,
Report this post.

For 20 years, I chased fraudsters and other bad guys globally on behalf of the United States government. During that time, I worked undercover in more than 30 countries outside the US, with worldwide responsibility for multi-million dollar cases. These days, I have other targets, just as bad: scammers who prey on the unsuspecting public, by misrepresenting supposedly lucrative investments in what are called “binary options.”

Binary options are all-or-nothing options. They are a simple way to trade price fluctuations in many kinds of underlying financial assets. A binary option is nothing more than a gamble on which direction the price of an underlying asset, stock or foreign currency will move by a designated expiration date/time, relative to the price at the time of entry. Think of roulette at the casino: place $1 on the “red”. After the wheel is spun, if the ball lands in red, you get $2. If it stops on black, you lost your dollar.

Realizing that, as with casinos, “the house always wins,” over the past decade entrepreneurs have formed hundreds of binary options companies.  First, they lease sophisticated “platforms” from web companies with roots in the online gambling industry. Next, they build fancy websites and hire fast-talking sales people. Here is where some companies go astray: They instruct the sales force to adopt false identities, and purport to be licensed brokers. They start by asking you to invest only $250. Surprise…you always win. Then they pressure you to increase your investment to the thousands, bringing you to a “VIP” level or other extravagant sounding names for “exclusive clubs.” Glorious names for simple traps. These operations bring millions of dollars into the coffers of offshore corporations, which are in a maze of other offshore entities, trust accounts and nominee shareholders — as if anti-money laundering laws never existed.

So, what’s wrong with little gambling? Even with a level playing field, it is almost impossible for binary option investors — in the long run — to make money. Add the fact that the binary option company gives you a “bonus,” most of the time without even asking you, to wipe out any chance that you’ll ever win and walk away with full pockets. The “bonus” has strings attached. You must gamble 20 times before the “bonus,” co-mingled with your principal and whatever you might won, is yours to keep. Statistically, almost an impossibility. Even if you pass that hurdle, next comes the old trick of placing your positions with a 6 months’ expiration date.   Now cue the Requiem for your money. And at the end, if you want to lick your wounds and withdraw what’s left of your principal investment, they give you the bureaucratic run around, or simply stop taking your calls and messages. What do you do? Hire a lawyer to sue John Doe, real name, address, and country unknown?

And when the complaints pile up, and law enforcement tries to come calling, they fold. Their expensive office addresses turn out to have been virtual, their virtual phone numbers are disconnected, and they have vanished exactly like the 80% profit they promised on your investment.

After certain fraudsters were already gone with millions, leaving only fictitious names and locations, I got calls. “Please,” my clients asked me, “find them and get my money back, that’s my life savings.” I heard heart wrenching stories of money intended for medical treatment, or for buying a house — all gone. And then, a family faced the ultimate disaster when the father committed suicide after realizing that he’d been scammed of all the money he had, and even the money he had borrowed.

This outraged my sense of justice. In four different cases, I applied investigative tactics practiced while serving the US government. Though it was never simple or easy, I was able to identify the perpetrators’ real names, and sent legal demand letters by messenger to their private homes in Israel. Shock and awe! They were stripped of their defenses, and the route to regaining my clients’ money, a total of $2,000,000, was suddenly very short.

When the word spread, I was flooded with dozens of inquiries seeking representation. In some cases, an unforeseen problem arose from an unexpected direction: the potential clients’ spouses and advisors.  “My wife doesn’t want anything to do with binary options,” said a man from California, excusing himself despite his potentially good case. His wife would rather write off $500,000 than hire a lawyer to go after the scammers. Or an elderly retired lawyer in Australia who lost millions, was counting pennies, and let his pride overcome the need to attempt recovery. Frankly, though these potential clients had initially called me for help, their spouses’ and advisors’ concerns were understandable. Wherever there’s a swamp there are bloodsucking mosquitos who swarm against all, including those who come to drain it. These “false saviors” call the victims offering help — for a modest upfront fee — only to disappear immediately thereafter. Thus far, I have met only one honest company in Israel that successfully helps victims. It was established by two non-lawyer former insiders.

Many governments have forbidden the sales of binary options to their citizens. They include the United States. It even brought a civil action against one company that sold binary options to US citizens anyway, forcing the company to pay $11 million in penalties and restitution. Nonetheless, for this company, $11 million was just a drop in the bucket. These penalties did nothing to halt the binary options’ worldwide scam business. New companies pop up every day.

Unfortunately, an estimated 90% of all binary options companies have Israeli roots. And Israel is my turf. Where is the Israeli government? I am asked this repeatedly. I must apologize: “Moving slowly.”

Are all binary options companies fraudulent? Not at all. Some are licensed and regulated and operate honestly. I have simply never come across any. Doctors see sick patients, and lawyers handle victims.

Haggai Carmon of CARMON & CARMON, is an Israeli lawyer who has represented the United States in Israeli civil litigation for 31 years. For 20 years, he has also performed intelligence gathering for the U.S government, working undercover in more than 30 foreign countries. He is the author of a five installment intelligence thrillers, inspired by his undercover work: The Dan Gordon Intelligence Thrillers™

About the Author
Haggai Carmon of CARMON & CARMON, is an Israeli lawyer who has represented the United States in Israeli civil litigation for 31 years. For 20 years, he has also performed intelligence gathering for the U.S government, working undercover in more than 30 foreign countries. He is the author of a five-instalment intelligence thrillers, inspired by his undercover work: The Dan Gordon Intelligence Thrillers™.
Related Topics
Related Posts
Haggai Carmon
Comments