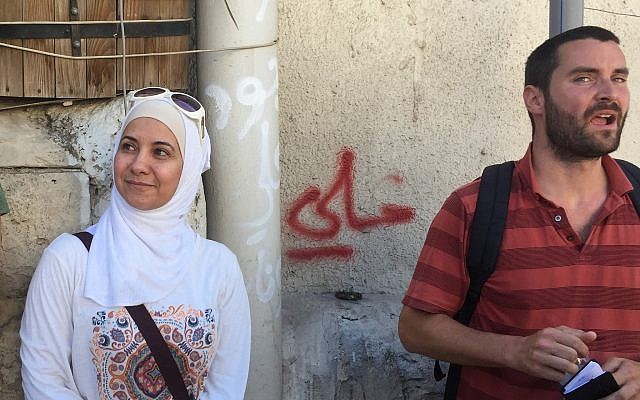 Call me a glutton for punishment, but I’m a settler who enjoys anti-Settler tours. I joined “Birthleft” with a group called, “All That’s Left: Anti-Occupation Collective,” for a tour of The City of David and Silwan. I was promised that I would see “Jerusalem from a different angle.” These tours provide an answer to what some maintain is a biased view of the Israeli-Palestinian conflict provided by Birthright.

Every summer, I take a few tours of Israel with left wing anti-settlement groups. I join these tours to listen and learn and I bite my tongue while I hear my neighbors and me slandered by lies about our motivations. On this trip, I was surprised that there were barely any lies told about “settlers.” The speaker, a Palestinian Arab who grew up in Silwan (but has since moved to a different neighborhood) uttered few falsehoods; she was more cunning. She told half-truths and omitted any facts inconsistent with her narrative. She side-swiped any question that highlighted issues with her narrative.

Here are a few examples of half-truths and omissions we were told. Omitting the perilous security situation Jews’ faced from resident Arabs, the speaker complained about security cameras that “settlers” (any Jew living in Jerusalem is called a settler) have installed outside their home. These cameras violate the Arab resident’s privacy, as they are now always on camera when they are on the street. Setting aside the absurd logic of complaining about a lack of privacy on a public street, she never mentioned, and when asked, avoided answering the direct question, about why Jews feel they need security cameras. She never once talked about the frequent Palestinian violence and terror in Silwan.

We weren’t told of the violence Jews are subject to by the Palestinian Arabs in her neighborhood. One of the participant’s sons was beaten by Palestinians on the same route as our tour, and when he tried to ask the speaker about it, was prevented by the organizers. While we were told that police arrested minors, we weren’t told of that week’s attempt by five teenagers to blow up a local Jewish house.

At one point the speaker complained about the limited travel and lack of opportunity her neighbors enjoyed, while simultaneously highlighting that she was provided a free education at Tel Aviv University and became a professional nurse. Our nurse talked about the poverty and heavy police presence in Silwan, while we didn’t see one police officer or soldier, we did see a disproportionate amount of BMW’s.

Problems every Israeli faces (Jews and Palestinians) were presented as discriminatory oppression. The length of acquiring building permits, lack of new housing, few playgrounds in urban neighborhoods, are all issues every city in Israel faces, but we were presented it as a uniquely Palestinian issue.

The most reprehensible omissions were her insidious accusations that Israel denied her neighbors equal rights and ignorance of Palestinian incitement. Explaining that Israeli Jews and Arabs were given rights of citizens, she claimed she was a mere resident and unable to vote in national or municipal elections. When questioned why she doesn’t apply for citizenship that Israel offers her and her Jerusalem neighbors, she admitted that because of a necessary security check and Muslim Imams declaring Israeli citizenship Haram (forbidden) she hasn’t taken advantage of Israeli citizenship and full rights. Although our speaker has three children she claimed she did not know if Palestinian schools taught students to hate Jews. She didn’t state any objection to a curriculum of hate.