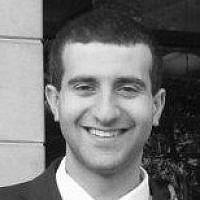 The Blogs
Zachary Fisher
Apply for a Blog
Please note that the posts on The Blogs are contributed by third parties. The opinions, facts and any media content in them are presented solely by the authors, and neither The Times of Israel nor its partners assume any responsibility for them. Please contact us in case of abuse. In case of abuse,
Report this post.

In an apparent hate crime, Michigan State University sophomore Zachary Tennen was beaten unconscious at a party last weekend after reportedly revealing to his two attackers that he was Jewish. Further evidencing that anti-Semitism may have motivated the crime, the allegedly KKK-affiliated assailants supposedly used the Nazi salute before brutalizing Tennen. Disturbingly, around 20 people purportedly watched, without attempting to intervene, as the two men stapled the unconscious victim’s mouth shut.

At Indiana, I almost immediately faced anti-Semitism. Attending my first college party four years ago, someone with whom I was conversing referred to my “big [expletive] Jewish nose”. The comment paralyzed me with shock at the time and has stayed with me to this day.

Admittedly, this rude comment hurt just one individual. However, during certain points of my time at Indiana, Jews had to think twice before publicly identifying themselves as such on campus.

In the waning months of fall 2010, a man committed a series of anti-Semitic acts of vandalism on Indiana’s campus, forcing the FBI to take notice. Within a single week, the man threw rocks twice at the campus Chabad House and once at the Hillel House, breaking windows at each Jewish student center. During the same week, the man removed eight sacred Hebrew texts from the shelves of the university library, moved them to the bathroom, and urinated on them. The vandal, eventually caught, was a middle-aged man employed as a scholarship coordinator for Indiana’s Hutton Honors College. However, both during and after the run of anti-Semitic vandalism, fear predominated among those of us who were active in Jewish life on campus.

Anti-Semitic incidents on campus, be they at Indiana, Michigan State, or elsewhere, sting the Jewish community long after the rubble clears. Campus anti-Semitism forces funds and focus to go toward security measures and away from Jewish education and programming. Such a hamstringing of campus Jewish life, one that I have seen firsthand watching Indiana’s Chabad House struggle to raise funds to buy a necessary surveillance system, is clearly a victory for the Jew haters.

Interestingly, though anti-Israel activity runs rampant on college campuses these days, none of the incidents to which I have referred in this post have a clear anti-Zionist motive. Instead of being inspired by an opposition to the Jewish state that may or may not stem from anti-Semitism, the aforementioned incidents appear to be motivated by an irrational yet passionate hatred of Jews with college campuses targeted because of their plethora of Jewish students.

This blatant and violent anti-Semitism terrorizes and endangers Jewish students, and it demands that Jews and righteous people everywhere take note and push back against anti-Semitic forces, letting the world know that such behavior is not okay.

I spoke this morning with Sheldon Gellar, an Israeli with a personal connection to this story as a former Hillel Director at Michigan State and a former professor at Indiana. He reminded me that “white racist anti-Semitism is nothing new and is often accompanied by violence. Racism and anti-Semitism must be reported, especially if they take violent forms.”

Please join me in praying for refuah shlema (complete healing) for Zachary Tennen.

About the Author
Zachary Fisher is a Washington-based writer. His articles on American-Israeli relations, missile defense, and anti-Semitism have appeared in a variety of publications.
Comments