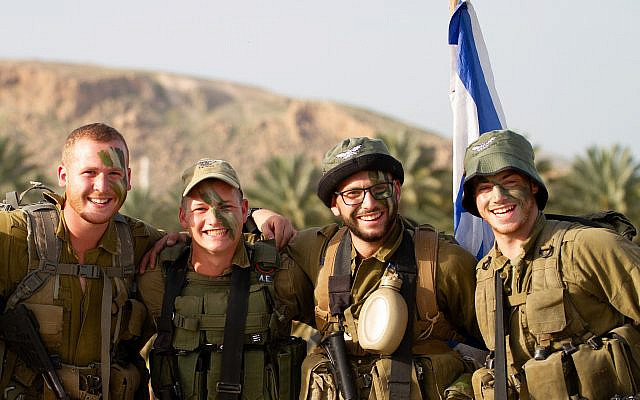 Yossi and his friends before their Masa Kumta. Picture by Shelly River

I admit, I have a reputation of instinctively being five minutes behind schedule.  (Alright, maybe ten).  My friends call it late.  I call it living just a bit behind in time.

Before moving forward, I intuitively busy myself with tying up the past.   In my mind, I am never late.   I am simply remaining behind in time for a minute or two — sifting and sorting and busily wrapping up memories in parcels light enough to carry forward.   For to me, a blessed future is best built by retaining within it the most precious elements of our past.

In recent weeks, I have seen that being behind in time is a family trait.   Neither great milestone nor grand gesture can be enjoyed without some step backward into the past.

First, there was my son, Yossi, a lone soldier in the Kfir brigade.  Upon his recent completion of training, his Zeydie, a Holocaust survivor, gifted Retzuot, gun straps, to Yossi’s unit.   Zeydie had once presented another set of Retzuot to Yossi, his Tefillin straps.   Both gifts were from behind in time — both ritually binding together grandfather and grandson, a challenging past and the future it had created.

Yossi had grown up with his Zeydie’s life lessons shared through stories  –  of his childhood in hiding, his teenage years in a DP camp and as a new immigrant serving proudly in the United States army.   Despite the challenges of Zeydie’s past, he was a man of constant motion.   And as Yossi’s brothers-in-arms affixed their Retzuot, he gave them Zeydie’s pump-up speech.    As soldiers they must never say “I have done enough.”    They must consistently be men of action like his Zeydie who, even in his late eighties, continued to work a full day as a builder.

Then, to this group of young men hailing from Ukraine, Ethiopia, Columbia, France, the United States and from Israel — all about to head into active duty —  Yossi paid forward the Bracha that he had received from his Zeydie so many times in the past.   He wished them Mazal and Gezunt  —  luck and good health  —  which according to his Zeydie, are all that is needed for a blessed life.

Days later, our first grandchild, Maya Zahava, was born.   Her naming was accompanied by a beautifully wrapped package from behind in time.   Gathered together in an outdoor minyan, sidestepping mud and raindrops was five generations.   As one grandfather announced her name in song; the other read from a well-used Torah scroll — one that had once resided in the shul in which baby Maya’s great-great grandfather had been the Rabbi.

As our dreams and prayers for this little child’s blessed future spiraled upward, they were unquestionably accompanied by sounds of Mazal Tov emerging from between the lines of a family Torah that had once again found its voice.

It has been several weeks of milestone and of blessing and as I return to routine, I feel compelled to busy myself with tying up these recent moments.   As I sift and sort and busily wrap up my memories, I think to myself of a conversation in the first chapter of the Song of Songs read just over a week ago.   The young shepherdess has lost her beloved and calls out to him for direction:

“Tell me, you whom my soul loves, where you feed, where you make your flocks rest at noon?”

To her query her beloved responds with words of comfort and guidance:

“If you do not know, oh fairest of woman, go forth in the footsteps of the flock and [then you will] feed your kids next to the shepherds’ tent.” (Song of Songs 1:7-8)

If you are lost, the beloved responds, there is no need for concern.   Simply look back and find the footsteps of the shepherds who have come before you.   If you see where they lead, then you will know exactly the direction in which you must go.

As I linger in the memories which precede Yom Ha’Atzmaut,  I cannot help but think that remaining behind in time is not only a national trait but a national blessing.   It is what gives the future we birth meaning.   For while at times our arrival may seem a bit delayed, it is precisely because we have never ceased looking back as a People, that we have found our way Home.

About the Author
Ariella Nadel is a TaNaKh teacher at Farber Hebrew Day School - Yeshivat Akiva in Southfield, Michigan and a longtime community educator. Ariella holds degrees in Judaic Studies and Political Science from Yeshiva University and a Law Degree from the Cardozo School of Law.
Related Topics
Related Posts
Comments