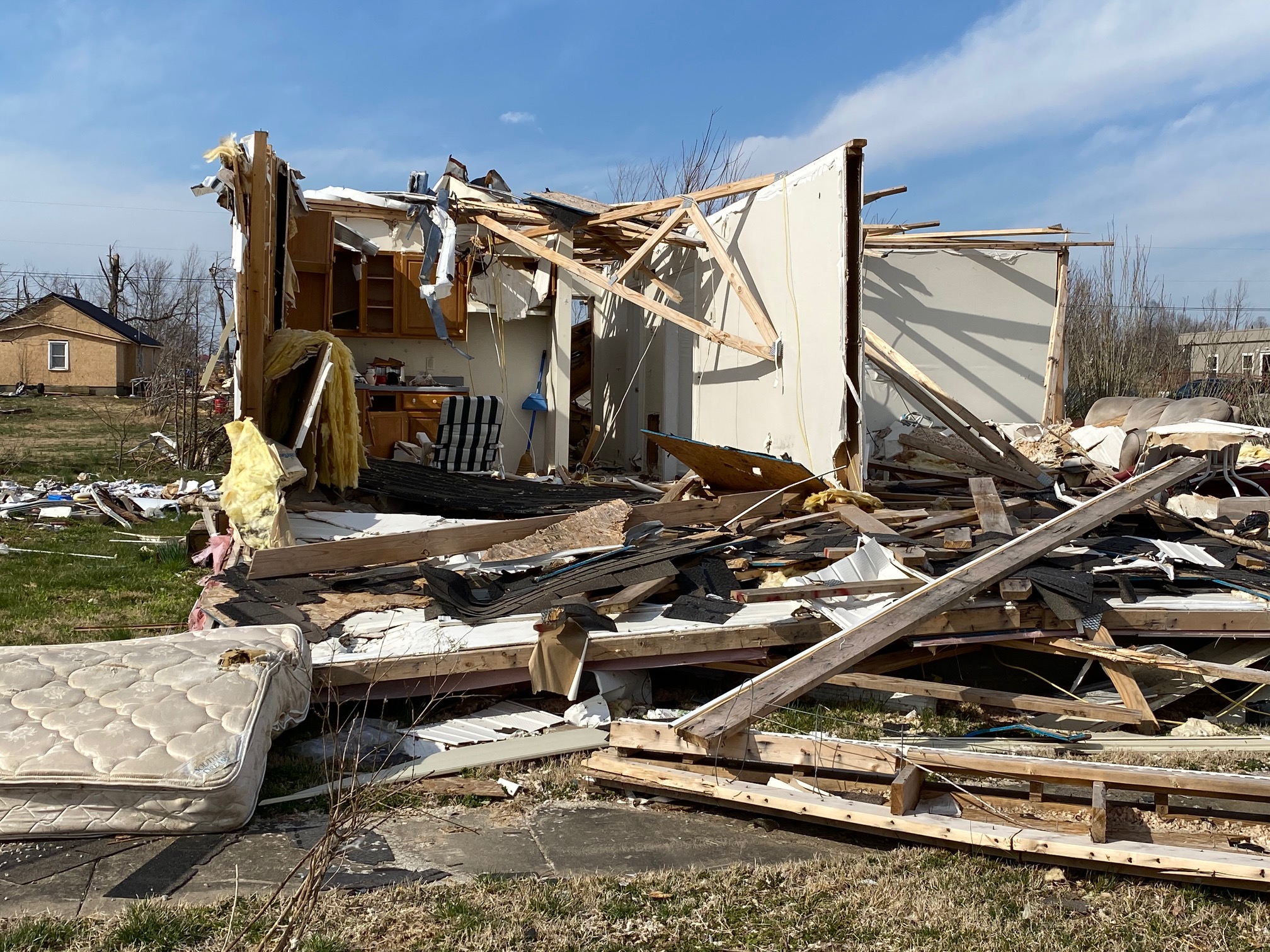 The remains of a house in Dawsons Springs, KY. Photo by Jonathan Feldstein

In December, I watched in horror, heartbroken, by the havoc and damage created by dozens of tornadoes touching down in Kentucky. One left a trail 200 miles long. I understood the damage was great, lives were lost, incalculable property damaged, and the impact will be felt for some time. As much as I understood all this, I understood that I didn’t really begin to understand. This month, visiting Kentucky, I began too.

After the tornadoes, I consulted with board members of the Genesis 123 Foundation which I have the privilege of serving as its president. I felt that we, Jews and Christians together, and me as an Orthodox Israeli Jew, had an opportunity and obligation to do something to show support, solidarity, and be a blessing to people in Kentucky.

I spent three days driving hundreds of miles in places I had never been and never imagined I would. With thousands of homes and businesses destroyed, and lives broken, we commissioned a stunning piece of art depicting the Land of Israel and the verses from Deuteronomy that Jews place in the mezuzah on our doorposts, as per the Biblical injunction. I arrived in Kentucky thanks to the help, networking, and making contacts with and through many people who paved the way.

After commissioning the art, I printed hundreds. I began in Bowling Green and met a pastor who asked for dozens of them. His men’s ministry was going out to help rebuild homes of those who suffered loss nearby. They were our grateful emissaries, bringing gifts and sending blessings from Israel. 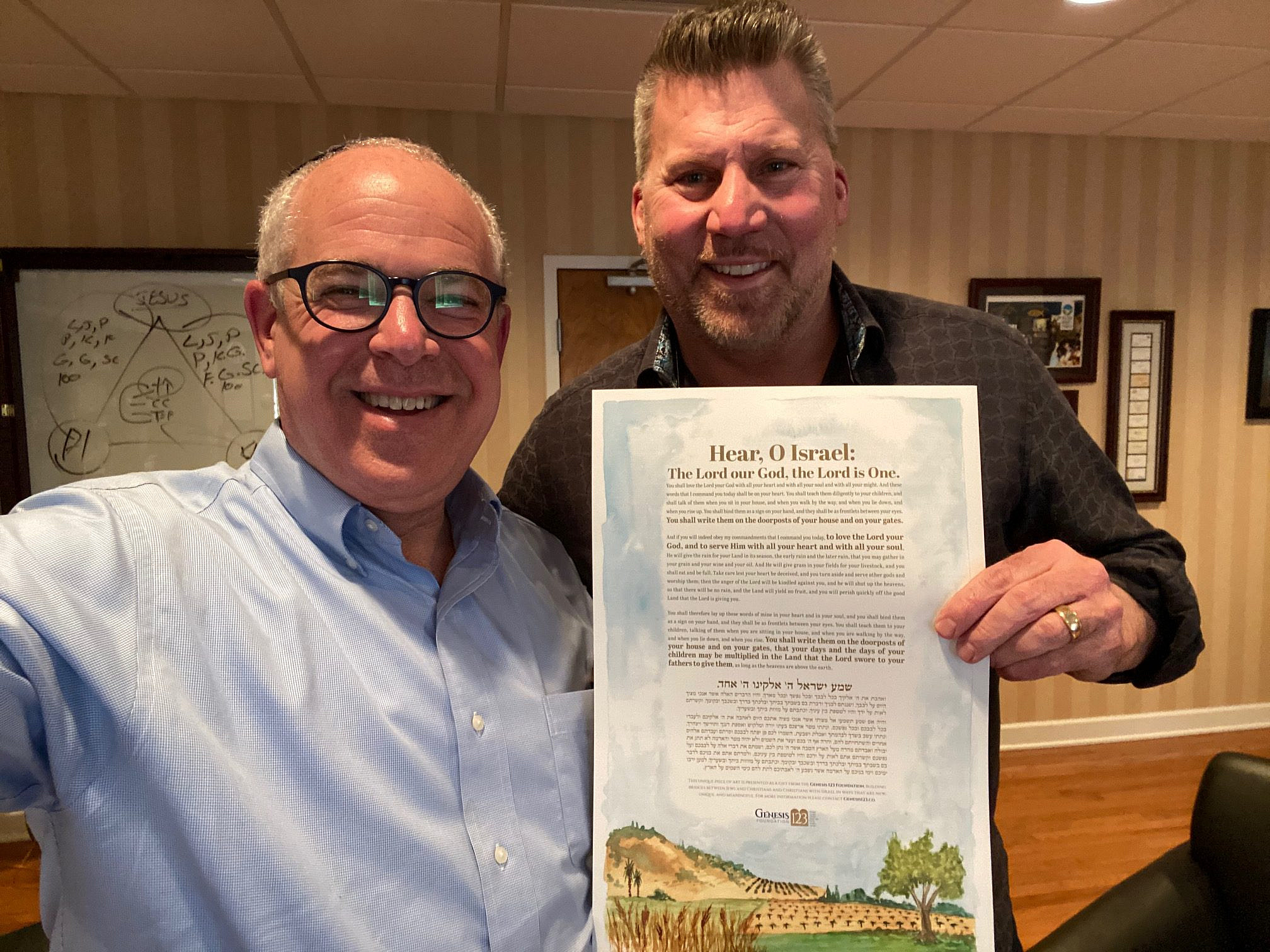 I visited in Madisonville with another pastor who did the same.

I went to Dawsons Springs where I was told to drive past the DQ, and up the hill, and I would see all the damage.  I hate getting directions like this (like being told once to drive by the house where Johnson used to live), but I followed the directions. The devastation is still shocking, three months later.

Many expressed frustration that after President Biden visited and the cameras left, many of the humanitarian organizations packed up and left. Fortunately, there are still some who have stuck it out and are a comfort. But despite losing everything materially, I was inspired how they haven’t lost their faith. It’s a particularly religious area where not too many Orthodox Jews visit. I didn’t know how I would be received. Everyone I met was inspired, encouraged, and grateful for the artistic depiction of the Land of Israel, the solidarity from Israel, the meaningful words of Deuteronomy, and the reminder to maintain our faith. 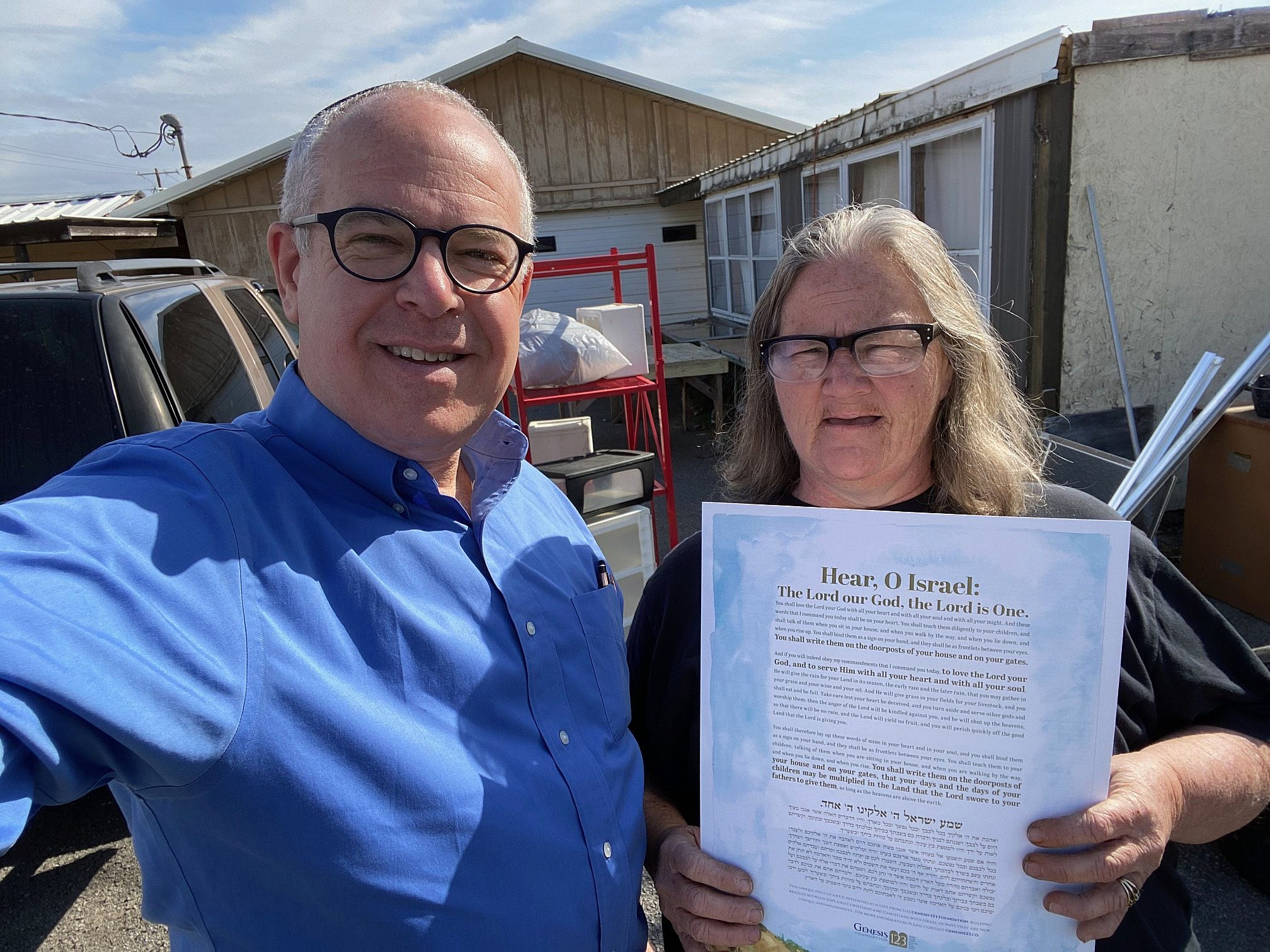 As I drove through rolling hills, the first indication of damage was visible along the highway; long lines of acres of trees smashed apart and uprooted. As the damage became more evident in the town, I felt grateful to be an Israeli. We have threats to us: personally, our lives, our homes, schools, businesses, etc. They come from Palestinian Arab and Islamic terrorists who fire thousands of rockets deliberately targeting our towns and cities. But we have an Iron Dome to take out the rockets.  We have precision guided weapons to neutralize the terrorists, while minimizing civilian casualties. There is no Iron Dome for tornadoes.

We have bomb shelters. Kentucky has storm shelters. One man, Buddy, told me how he and his wife prepared their shelter and camped out there. While watching the news there were reports of tornadoes touching down in Dawson Springs. At that very moment he heard a loud noise above them that lasted about 30 seconds. He went upstairs thinking that they had missed the worst of it, only to find his entire house destroyed.

I printed hundreds of the mezuzah gifts, concerned that I would end up bringing many home. In the end, I didn’t have enough. I visited people in churches, the post office, city hall, gas stations, and asking direction on the street. I saw a new house going up across the street from pile of rubble that used to be another house, and asked the contractor if they would give one to the owner. In most places, in hearing their stories, and receiving this gift, people asked, “Can I get one for…” and they mentioned a friend, neighbor, or their pastor.

At one point I grabbed one in Spanish by accident and was told where there was a local Mexican restaurant to bring one to bless them. So, I did.

A few commented that the scenes from Ukraine are nothing compared to the devastation in Kentucky. I’m not sure. But I do know that for many, their lives, livelihood, and that of their churches, communities and families as they were, are forever changed.

I didn’t want to leave because I felt the need to give out more of these gifts and be a blessing to more people. Because of my plans, I was connected to several Kentucky state representatives, and I had an appointment in the State Capitol in Frankfort, three hours away. When I arrived, I was greeted with tremendous warmth and gratitude. I met with close to 20 percent of the Representatives who treated me like a celebrity. I explained why I had come to Kentucky, how I had wanted to be a blessing, the reason why Jews place a mezuzah on our doorposts, and the verses from Deuteronomy that are represented on the art I gave them. I was blown away that they all asked me to sign these, as if I was the artist. It made me uncomfortable because I was not coming to be a hero, just to show solidarity and support. But I understood that my being there resonated and meant a lot. 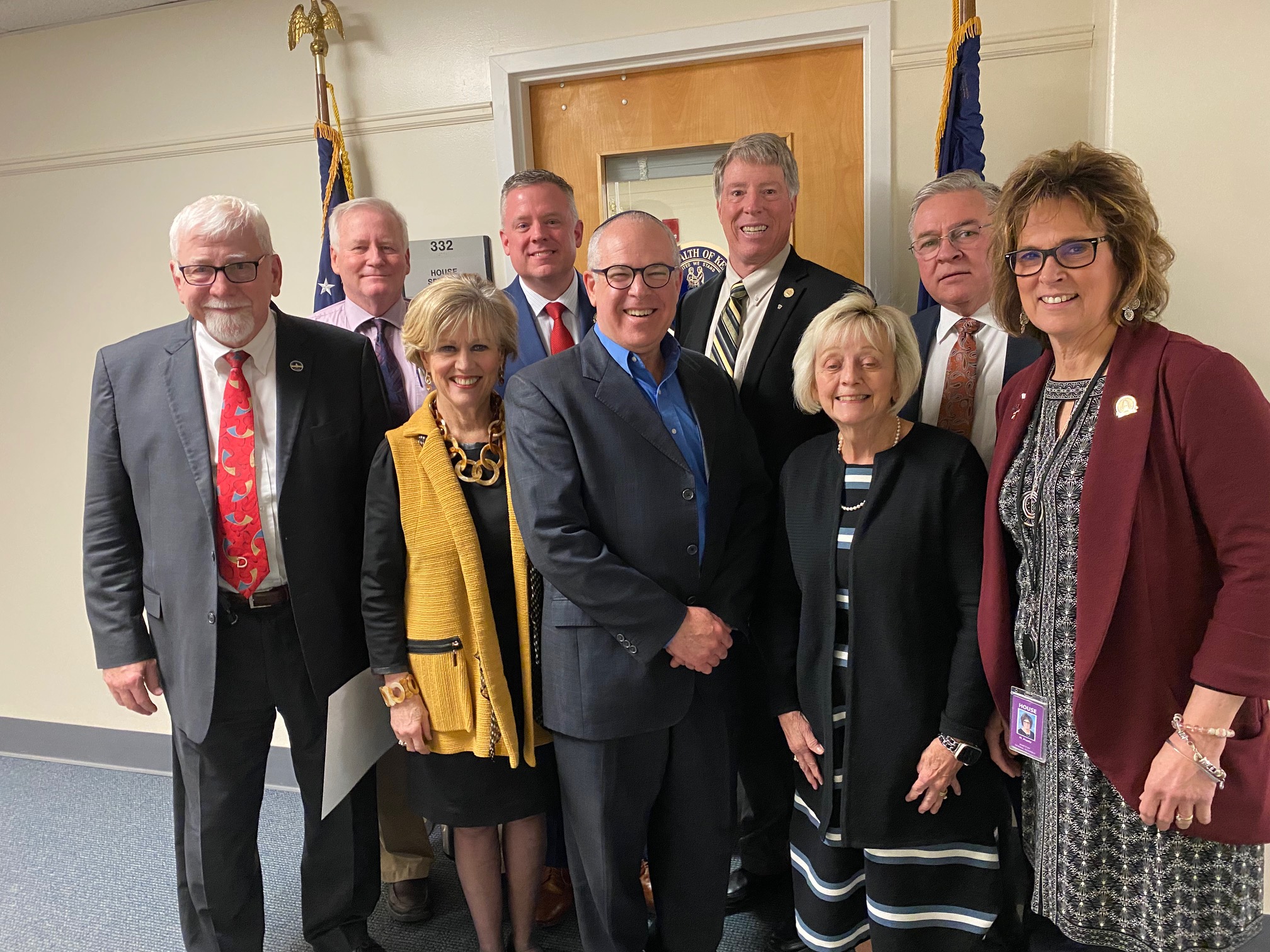 One representative expressing tremendous hospitality took me on a tour of their stunning Capital building. I was put in the place of the leader of the Senate, and as a justice on the Supreme Court. My mother always wanted me to be a supreme court judge. I hope she enjoyed that moment from heaven. I was also privileged to meet and chat with Governor Andy Beshear. After hearing why I did what I did, he asked for one of the autographed pieces of art.

After I left Kentucky, reports of tornadoes devastating Louisiana caused me to contact a pastor there to see if he’d distribute the art there as well.

Because the first several hundreds were not enough and the idea was so well received, the Genesis 123 Foundation wants to make more, to multiply the blessing, now in two states. There are people to help distribute these as widely as possible. People who wish to be part of this by donating $74 at www.Genesis123.co with which we will print and distribute more. For donations of $148, we’ll be pleased to send one to the donor too. The Genesis 123 Foundation is excited that this was as meaningful and successful as it was, and looks forward to do more.

The world, rightly, is focused on Ukraine and the horrors and devastation that’s happening there. But there are tens of thousands whose lives have been permanently impacted by an act of God, not that of an evil madman. Compassion has no limits. Maybe it’s not a lot, but this is a tangible way in which we can be of help. 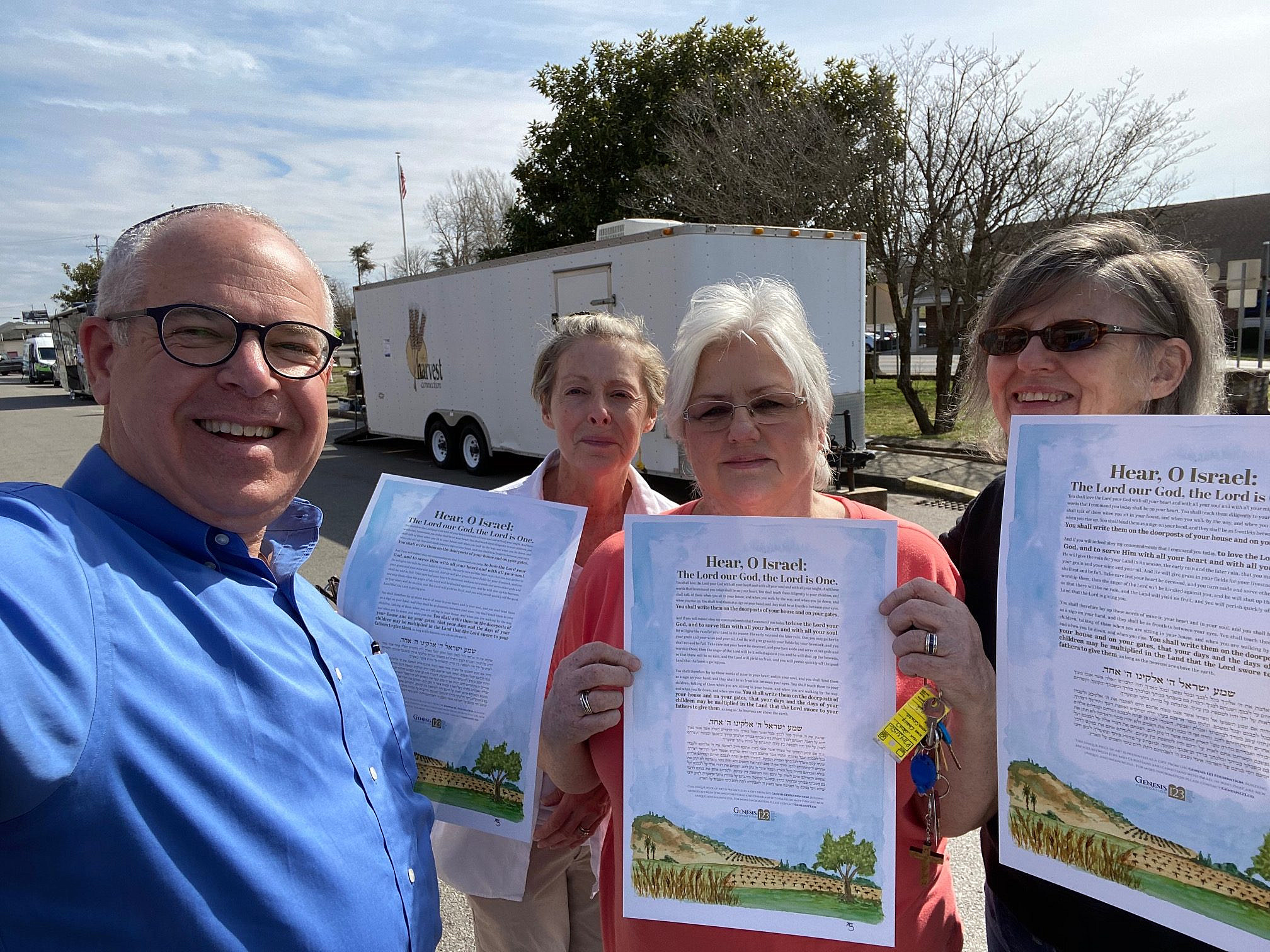 Blessing women whose homes were destroyed with a gift for their new homes. Photo by Jonathan Feldstein
About the Author
Jonathan Feldstein made aliyah in 2004, married and raising six children in the Judean mountains. He is a long time Jewish non-profit professional. As president of the Genesis 123 Foundation he works closely with many Christians who support Israel, building bridges in ways that are new, unique and meaningful.
Related Topics
Related Posts
Comments