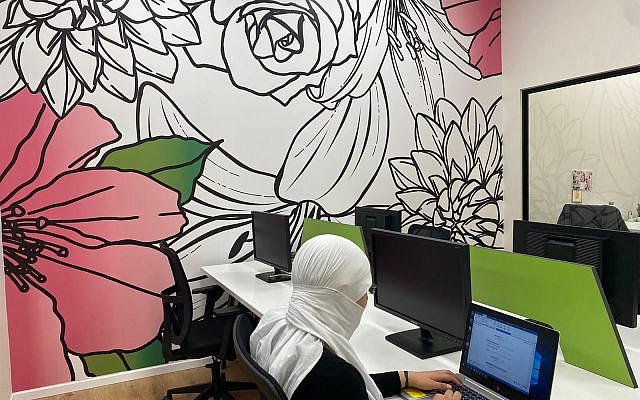 At what point does something extraordinary become ordinary? When do inventions and novel ideas, once so revolutionary and radical, become routine? You may find yourself easily reflecting on these questions- just like I did after a recent visit to Lotus, a high-tech hub in Daliyat El Carmel, the largest Druze village in Israel.

Whereas many of my past visits to Daliyat El Carmel, perched right on top of the Carmel Mountains, had been about honoring the local heritage, this one was about an effort that is blazing a whole new tradition. I met with Maysa Halabi Alshiekh, the visionary behind the initiative of Lotus. Walking into the office space, you can see the backdrops of lotus flowers everywhere. Each office space is filled with teams of software developers, often on zoom calls with computer coding teams from all over the world, delivering results for leading Israeli companies such as Amdocs, Finastra, Radcom and Netafim.

And yes, within the first half hour of my visit, I was starting to swoon. I had to wonder if it was the higher altitude. Or maybe the extra strong aromatic Druze coffee. It could have been the energy of the place, charged with all the intellectual vitality required for computer programming. But most likely, it was the exhilaration of standing in the presence of someone’s creation. Maysa and the women at Lotus are breaking new ground, you see, claiming a place for religious Druze women to have career opportunities in software development. 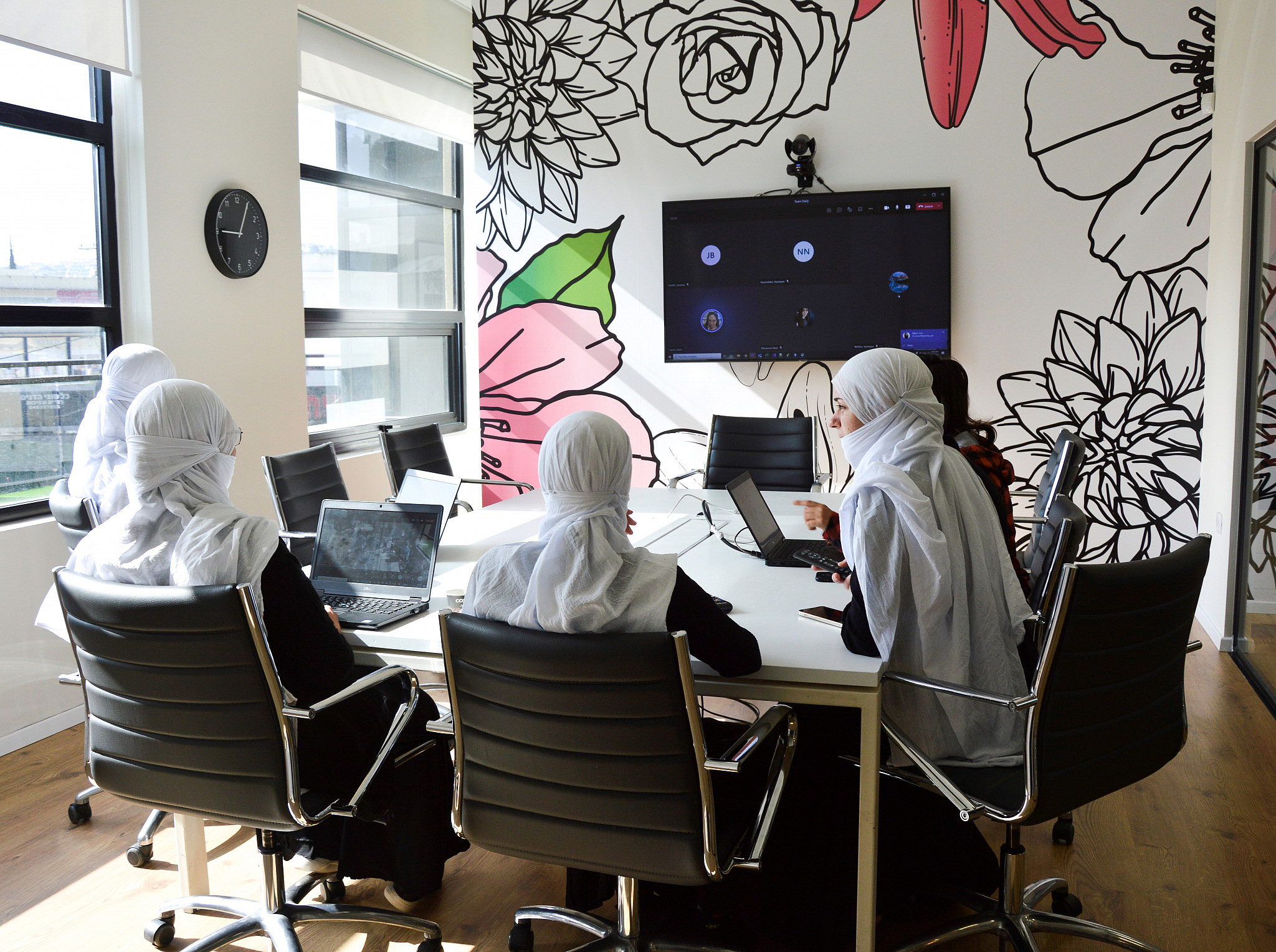 Team of software developers at Lotus working on zoom with colleagues- teams that include participants everywhere from Cyprus to India. Fall, 2020. Photo Credit: Moran Salach.

As Maysa gave me a tour around this feminine high-tech hub, I thought about what force of will it took for her to establish such a place. It is the first of its kind in a Druze village. Undeterred by initial skepticism, Maysa has taken on both conventions and expectations in establishing Lotus. Over time she has seen her ideas gradually gain community-wide support. And through her brave acts, Maysa has become part of the generations of scholarly women who often surprised their contemporaries, including the world’s very first computer programmer, Ada Lovelace.

You may wonder about this new template at Lotus, and if it can be considered such a remarkable invention. After all, many of us are familiar with Druze women who have found varied opportunities outside their home base, taking on leading roles in politics, medicine and more, alongside their male counterparts. 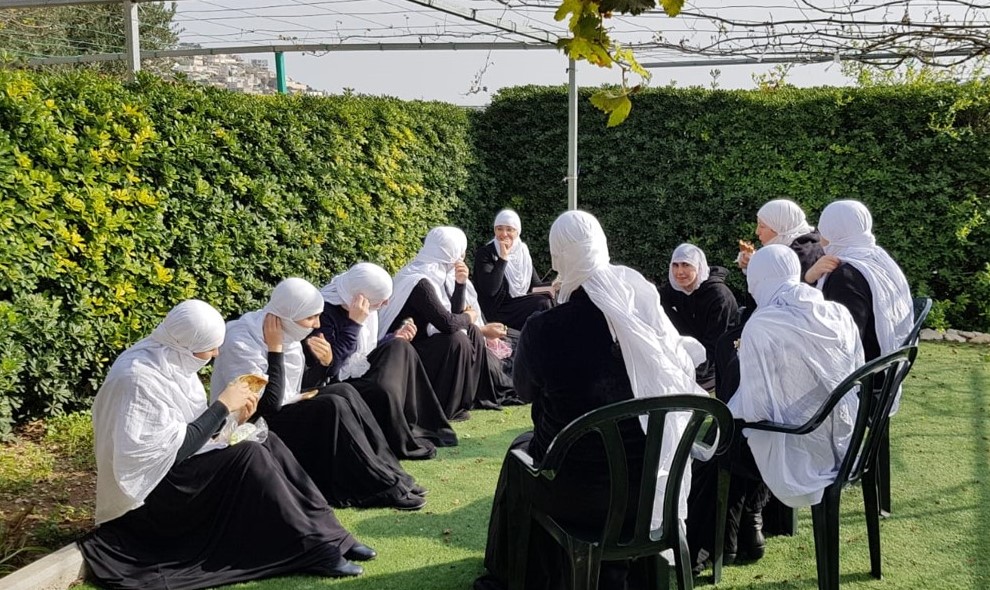 But what’s different is that Maysa and her colleagues have embraced a religious lifestyle, which means that while the secrets and the rich spiritual tradition of the Druze religion are open to them, they also have restrictions, especially with regard to their mobility. Traditional religious Druze women are not permitted to have driver’s licenses or leave the village unaccompanied by a male relative.

And ever since becoming religious, Maysa has been gently leading all types of conversations that have sought to navigate between custom and religious dictate, tradition and convention. Landing on her own type of invention, she started Lotus with the singular goal of creating high-tech opportunities for women who were not going to venture past the village boundaries. Maysa knew scores of young religious women who were graduating high school with top marks in mathematics, physics and English, having also received rigorous training in analytical skills that came with their intense religious studies. Yet after having nurtured an ambition for excellence, many of these graduates had limited options for further intellectual pursuits outside the domestic sphere. 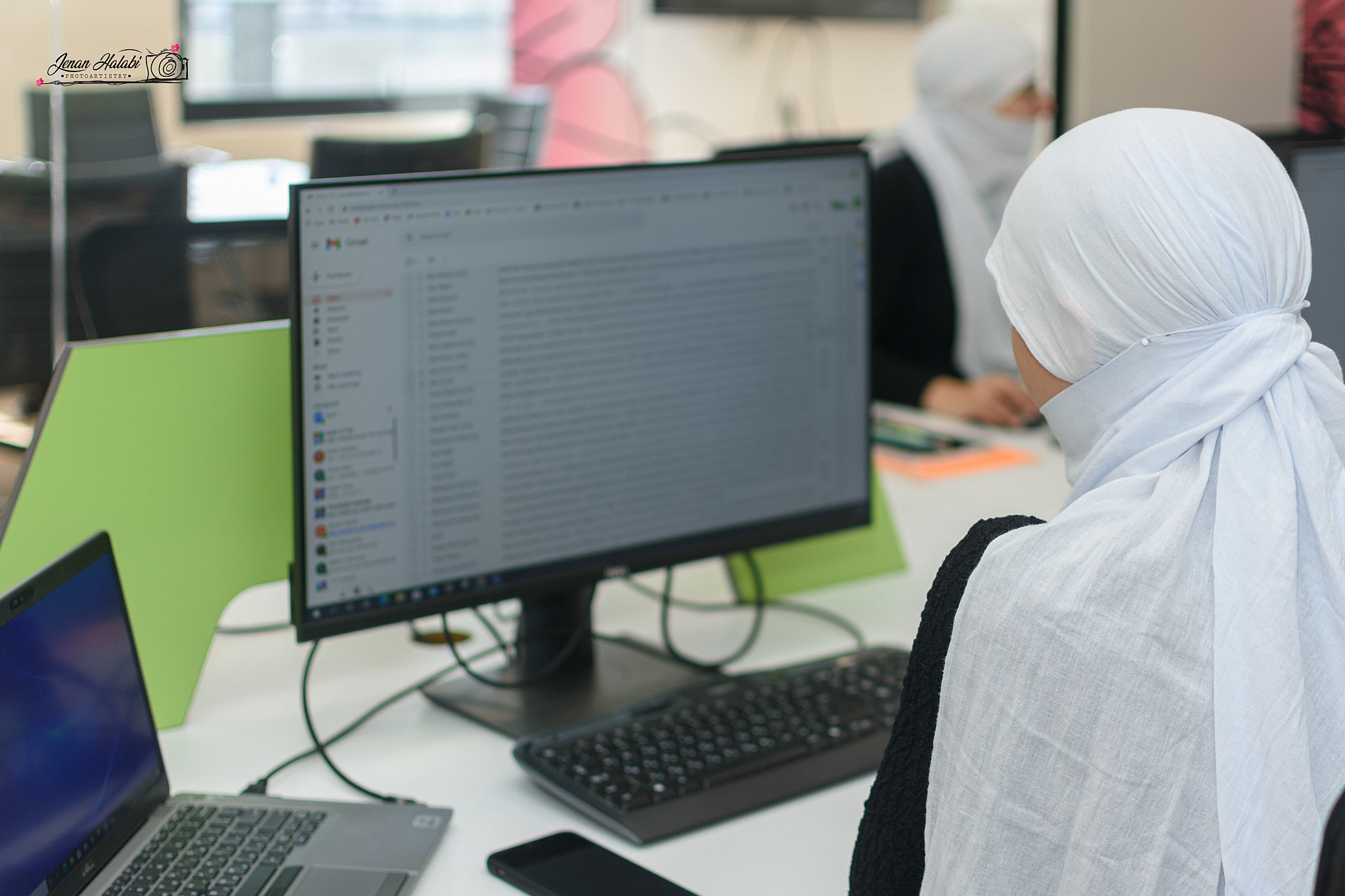 The third cohort of Lotus will be graduating in July, and Lotus will soon have over 55 software developers on board. Spring, 2020. Credit: Moron Halach

In the Spring of 2018, with the enthusiastic support her family, Maysa started by knocking on doors to spread the word about her idea. After gathering a group of fifteen women who were interested in learning more about computer coding opportunities, they began meeting twice a week in her in-laws’ living room.

Maysa, who had been figuring and reconfiguring this idea over time, was carefully seeking a balance between what was permissible and possible. She was able to gather more allies, including men who were part of the traditional leadership, a helpful piece in any equation when taking bold steps for women in more conservative communities. Within a relatively short period of time, her growing coalition of supporters included representatives of the religious Druze community, national governmental ministries and Portland Trust. 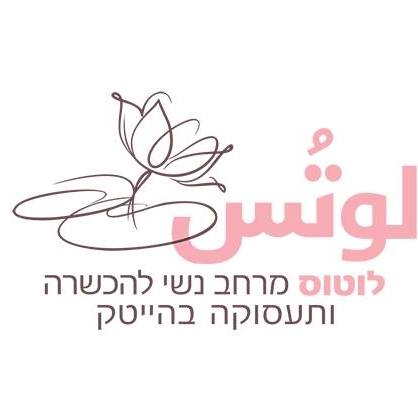 So it was, by the end of 2018, that the first cohort of women enrolled in an eight-month software training boot camp through the Ministry of Labor and Social Welfare. Soon afterwards, Lotus was established as a high-tech hub to provide professional training, managerial support and mentorship to the women.

And the funding for the second cohort at Lotus for a boot camp? It came exclusively from the National Druze Religious Council. This spoke volumes to any remaining skeptics about such a novel invention. And now, the third cohort, which started in the Fall 2020, includes women not only from Daliyat El Carmel but also from other Druze villages all over Northern Israel. 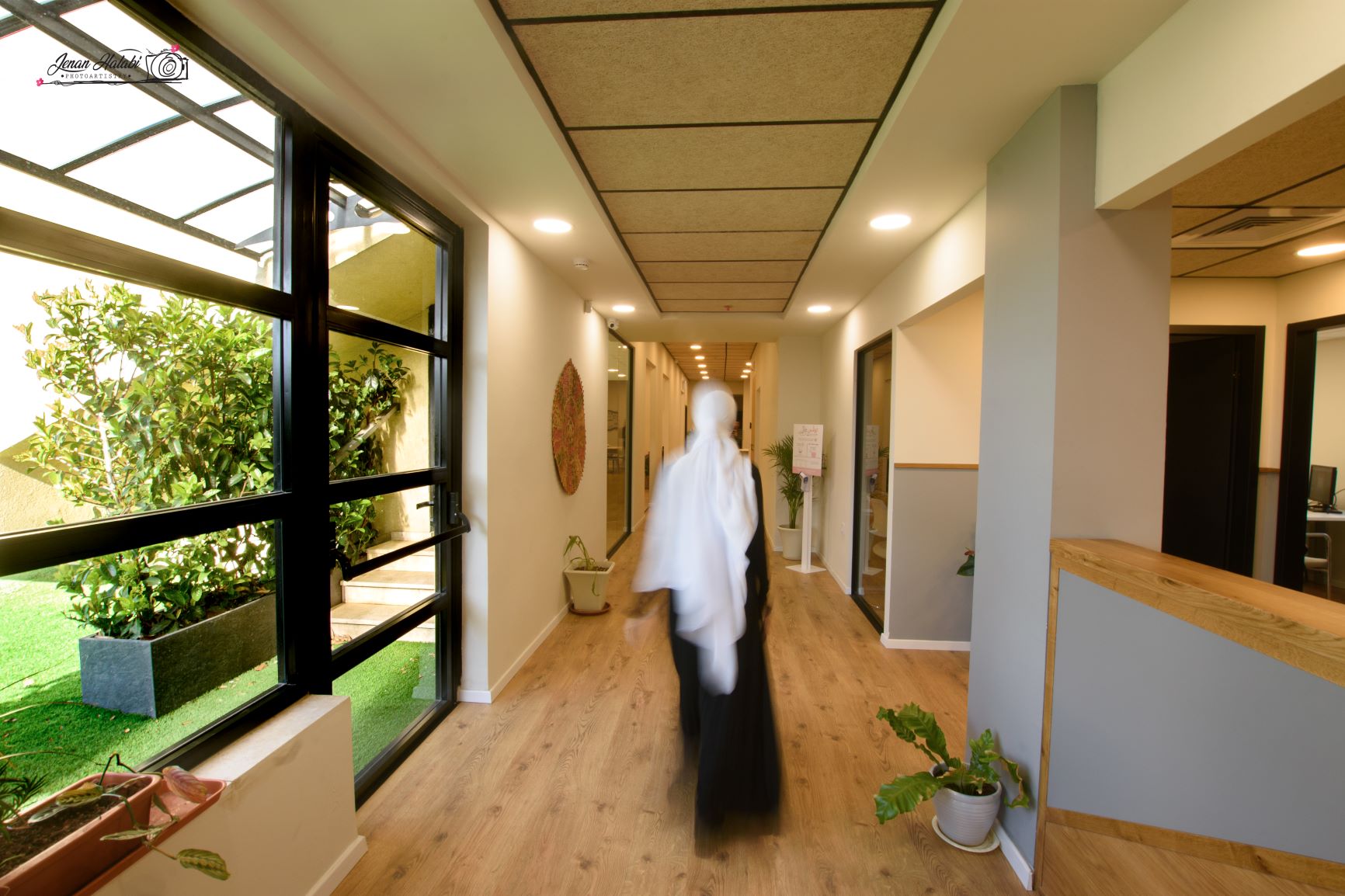 With the fourth cohort planned for the Fall, Lotus will continue expanding over the next year, with new offices scheduled to open in the Galilee. Spring, 2021. Credit: Jenan Halabi

Maysa and her colleagues at Lotus continue working hard, well-aware that any scientific invention or new discovery doesn’t come easily. The backdrop of lotuses that decorate their office space, flowers that grow in the most unlikely conditions and renew each day, is a great reminder. Each step at Lotus is carefully calibrated. They are continuing to come up with new computations to navigate the fast-paced and competitive high-tech world, and redefine what is seen as finite, or more accurately, to create infinite possibilities for women.

We can sometimes stay too much in the abstract when we analyze how societal change takes place. We all need reminders of how much we can continue to reshape the stories, the narratives that get told, the individual opportunities that are opened up to us. So until you have a chance to visit, you can think of Maysa as I do – placing her stake in the ground while moving forward to create a hub of opportunity. And of course, there is a victorious flag flying high on the top of the mountain, surrounded by lotus blossoms.

About the Author
Dr. Nancy Strichman teaches graduate courses in evaluation and strategic thinking at the Hebrew University’s Glocal program, a masters degree in International Development. Her research has focused on civil society, specifically on shared society NGOs and gender equality in Israel. She lives in Tivon, Israel with her four children and her very patient husband.
Related Topics
Related Posts
Comments
Advertisement