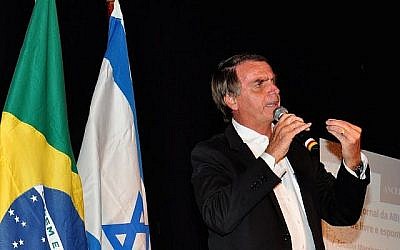 Jair Bolsonaro, the president-elect of Brazil, used his Twitter account to reinforce his plans for improving relations between his government and ths State of Israel.

Pontes, a former Air Force lieutenat colonel, was the first Brazilian astronaut, working as a mission specialist at NASA. The Northeast region is the poorest in Brazil. Its desertic climate has similarities with some regions in Israel.

In his tweet, Bolsonaro also assured that “In January, we also plan to build a pilot plant to draw brackish water from wells, desalinate, store and distribute it to the region’s family agriculture. We also studied with the Israeli ambassador and a specialized company testing technology that extracts water from the humidity of the air in schools and hospitals in the region. We can even negotiates building a factory in the Northeast for the production and sales of these equipments.”

The message also adds: “Free from ideological biases, Brazil can now take the first steps to crawl out of the hole we were put in by the tow last presidents. We stey firm in our mission to continuously make this nation stronger!”

During the brazilian elections, Bolsonaro said many times he planned to “get closer” to countries lik the USA and Israel. He also promissed to recognize Jerusalem as Israel’s capital and move the brazilian embassy as soon as he takes office.

Prime Minister Benjamin Netanyahu will travel to Brazil to attend the inauguration of incoming President Jair Bolsonaro, on January 1st, 2019.