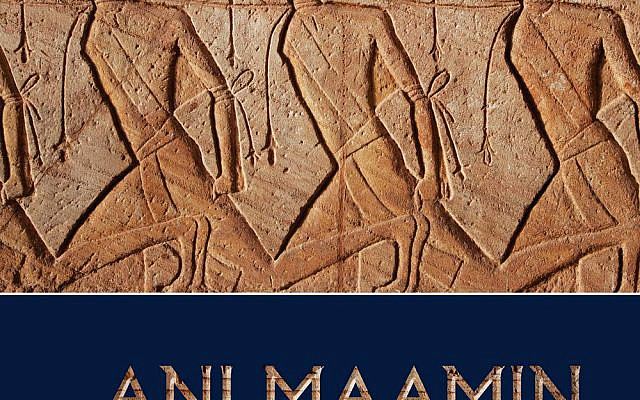 There is an old and well-known Yiddish aphorism – fuhn a kshya shtarbt men nisht – loosely translated as “no one ever died from a question.” Of course, it is not absolute, but we now find that people often have spiritual deaths from specific theological questions that remain both unanswered, inadequately answered, and perhaps the worst, disdainfully dismissed.

Often these questions are in areas such as Torah and science, evolution, age of the universe, the veracity of certain stories and events in the Torah, and more. In Ani Maamin: Biblical Criticism, Historical Truth, and the Thirteen Principles of Faith (Maggid Book), Rabbi Dr. Joshua Berman, professor of Bible at Bar-Ilan University, has written a remarkable work where he takes on three profound topics.

As the title implies, Berman takes on three heavyweight topics. These topics are terrifying to many due to both their sensitive and complex nature, in addition to easily being misconstrued. These fears originate from the fact that these topics are often seen as having traces of heresy, to which they are Kryptonite-like topics for a Jewish soul.

In his push to engage more people to be involved in kiruv, Rabbi Noach Weinberg would use the analogy of a person walking by a lake and seeing a person drowning. If the passerby does not know how to swim, then it is a tragic life lost. However, if the person walks by that lake every day and sees people constantly drowning, it is incumbent upon them to learn how to swim.

In the book, Berman masterfully deals with theological topics that many are drowning in, and in the book, sends the reader a life-preserver, both for themselves and those around them who may struggle with these unanswered questions.

The term Bible criticism is enough to make a traditional reader apoplectic. However, these issues must be addressed. And Berman’s tour de force provides the readers with clear, non-apologetic answers to these questions.

Berman opens the book with an audacious yet fundamental point: that to fully understand the Torah and its way of conveying ideas and messages, we must seek to understand the Torah in its ancient Near Eastern context. It is undoubtedly an anachronism to think that the Jews that left Egypt thought in the same way that we do today.

By understanding the Torah in this context, Berman answers many of the questions raised by Bible critics. This includes the literary use of numbers in a way that is not intuitive to use today, repetition of stories, the use of common law versus statutory law, and more. Berman concludes the chapter by noting that the Torah displays an intimate familiarity with the realization of late second-millennium Egypt.

Other topics Berman discusses include the Exodus and its lack of historical proof, the flood story and its parallels in other cultures, source criticism (that the Torah derives from numerous sources, and the attempt to determine who wrote which parts), legal inconstancies and more.

Berman is an astute scholar, and his deep understanding of traditional sources, combined with his academic experience, creates a most engaging work. The average reader, including myself, is unequipped to deal with these questions. When academics raise valid questions that seem to undermine large swaths of Jewish history, philosophy, and thought, the stakes are quite high.

Berman not only brilliantly answers these questions, but he also takes those involved with source criticism (also known as higher criticism) to task. This approach attempts to identify the pre-existing sources from which they think the Torah is supposedly composed from. This approach attempts to use approaches and techniques that, that when placed against a near-Eastern context, fall apart.

The last part of the book deals with the Rambam’s thirteen principles of the Jewish faith. While the first rabbinic figure to lay down a list of Judaism’s fundamental beliefs was Rabbi Saadia Gaon in the 10th-century, it was the Rambam about 200 years later whose principles became the most well-known. The question is: how is it that something as central as fundamentals beliefs had never been produced until then?

Perhaps the most striking thing in the book is the principle which notes that the entire Torah now found in our hands was the exact same one given to Moshe. Yet Berman writes that as early as the Baalei HaTosafos in the 12th-century, the sages realized that an error had fallen into the transmission of the texts of the Tanach, including the Torah. In fact, Rabbi Akiva Eiger lists dozens of discrepancies between the Masoretic text and the reading of various verses according to various Midrashim.

Logically, these observations are nothing short of damning. But when our sages were confronted with this, well before the Bible critics brought them to light, they responded with calm and confidence.

And that is precisely Berman’s gift – he shows that there is nothing to be frightened of. One needs to understand these questions, even if they seem at first glance to undermine the core principles of Judaism, find the answers, and reply with that level of calmness and confidence.

There are endless questions and uncertainties the academic study of the Bible over the last century has introduced. Some of these questions are sophomoric, yet many of them are quite profound and legitimate. While these questions cannot be dismissed, there were very few addresses where one could go for answers. To which Berman comes to the rescue.

Berman is a gifted writer who answers these complex questions in a most accessible manner. In Ani Maamin, Berman has written a remarkable work that provides these answers. Even for those that are utterly disinterested in the academic questions, the brilliant and novel insights he provides add numerous layers of understanding that can only enhance one’s appreciation for the Torah.