One of the most influential figures in Jewish thought over the last two generations is none other than the educational entertainers Uncle Moishy and the Mitzvah Men. They taught countless Jewish children across the globe the fundamental idea that HaShem is here, HaShem is there, HaShem is truly everywhere.

Uncle Moishy was able to take a profound kabbalistic idea and make it child-accessible. The issue, though, is that while Jewish thought is deep and profound, if a person’s relationship with God does not develop and mature with age, they could grow into adulthood with childish theological understandings. Uncle Moshe is age-appropriate, but that age is only meant until the low double-digits.

When it comes to the book of Bereshit, many of the stories can be read in a simplistic Uncle Moishy-like reading. However, limiting oneself to that level means the person is missing out on the deeper meanings. There are infinitely deep and profound ideas in Bereshit, and for those looking for those more rooted and sophisticated ideas, Rabbi Ari Kahn brings those to light in his superb new book Explorations Expanded: Sefer Bereishit (Kodesh Press). 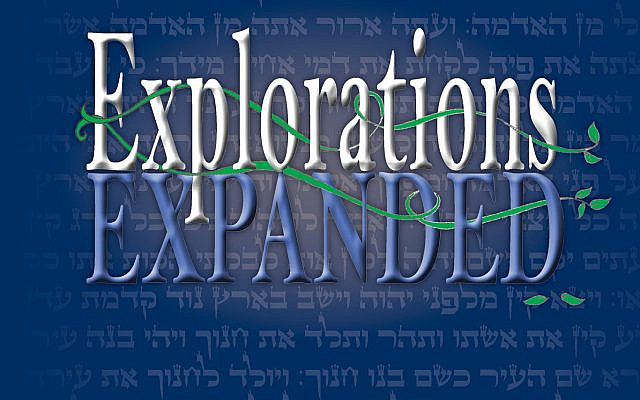 Kahn takes the reader through an in-depth exploration of the textual subtleties that are found throughout the Chumash, but even more so in Sefer Bereshit. In parsha after parsha, he notes contextual difficulties and challenges. Often running into ambiguous and occasionally contradictory language, he unravels these contradictions to bring out deeply profound messages.

He writes that some years ago, a young woman told him that her idea of the study of the Torah is a pursuit of revelation. He notes that her comment was so simple yet so profound. The book is his attempt to increase that revealed word of God.

In each parsha, Kahn brings out the many layers and meanings that are often hidden within the text. He is a careful reader, not letting a single word or phrase go by, without stopping and extracting its more profound message,

In all of Bereshit, there is arguably no narrative more enigmatic, troubling, and prone to misunderstanding than that of Yosef and his brothers. Kahn does a remarkable job of showing how each word within the Yosef story is loaded with theological and mystical implications. The Yosef story is also filled with symbolism, and he shows the underlying message, and what Yosef was trying to accomplish with these symbols.

For the mature reader looking for a sophisticated commentary, Kahn does not disappoint. As indicative of the title, Kahn invites the reader to take an exploration thought the text. That exploration is, in fact, a most wondrous journey.

I am part of the Kav L’Noar marathon team. Next March, I will be joining a few hundred others on Team Kav L’Noar at the Jerusalem marathon, where I will be running the half-marathon. I will detail that journey and the race in these pages in early April. If you would like to support the team and me, my page is here.