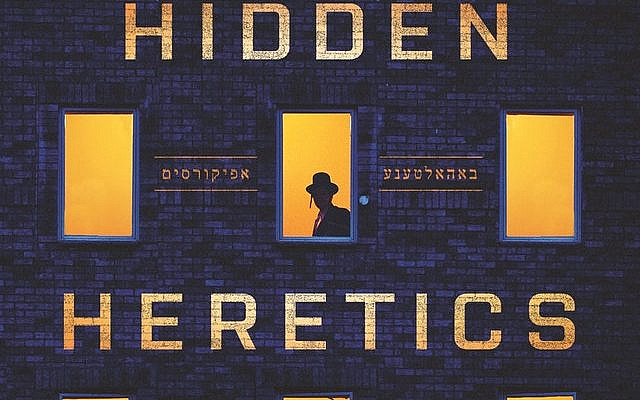 I thought of that analogy when reading an interesting new book Hidden Heretics: Jewish Doubt in the Digital Age (Princeton University Press 978-0691169903), by Ayala Fader, professor of anthropology at Fordham University. Her book analyzes the digital age’s impact, primarily the internet, and its impact on the more insular parts of the ultra-Orthodox world.

Fader is a gifted writer, and this is an insightful and fascinating book. Many of those interviewed lead double lives. A term she created, double lifers, is used to describe those with an external appearance as a Hasidic Jew. However, their internals is those of a non-believer. They give the public appearance of adhering to halacha, even as they explored forbidden worlds, online and in-person, beyond their own.

How prevalent double lifers are in the Hasidic world is impossible to determine, nor does Fader attempt to quantify it. However, given the size of the Hasidic population in the New York City area, even if 0.2% were double lifers, that would still be a sizeable number. While one can read this book and possibly jump to the conclusion that double lifers are a crisis, it seems as if they are simply a reality of any large faith-based group.

The focus of the book is what Fader calls “life-changing doubt.” This is a type of doubt that dramatically troubles a person’s faith in the truth of all they had grown up believing, even obliterating it for good. These doubt almost always provokes these individuals to make more significant public changes in their everyday lives with social and institutional repercussions.

She writes that those living double lives are part of a broader twenty-first-century generational crisis of authority among the ultra-Orthodox—a new aspect of an age-old problem. While the internet’s effects play a significant role in the book, every new technology has been seen as a dangerous outside force.

From papyrus, the printing press, newspapers, the radio, and more, new inventions have long been a scourge. As relatively recent as the early 1950’s, the venerable Rabbi Pinchas Teitz of Elizabeth, NJ, was criticized for using the radio to teach Torah to the general public.

A recurrent theme is that many of those facing doubt used the internet to find answers to the questions that were left unanswered within their schools and communities. Those struggling with faith and its underlying skepticism of everything holy is undoubtedly not a new phenomenon. Those who question rabbinic authority goes back to the first years in the Sinai desert with Moshe being challenge by Korach and his band of merry heretics.

Part of the issue is that for most of these double lifers, their only avenue to get answers to their questions is via the internet for many of these skeptics. This is the same internet that is seen as the bogeyman within their communities. A common theme throughout the book is various rabbis and community leaders blindly condemning the internet. Not that such an approach does not have merit. Nevertheless, as Rabbi Aaron Lopiansky perceptively writes in Ben Torah For Life, the internet is merely a facilitator, rather the initiator of a process.

Many of the double lifers voice frustration that they end their teen years without job prospects or understanding of society at large. Often this is manifest in their lack of secular education. One of the double lifers recounts how he would go weekly into Manhattan to donate blood just so he could watch television. Had he had a primary science education, he would have known that he was likely donating plasma or platelets, not blood.

While this book is placed in the anthropology section, it should also be listed as a tragedy. It is a tragedy because these double-lifers, with legitimate questions, are looking at the wrong books and the wrong parts of the internet for their answers.

Recent remarkable books such as To This Very Day: Fundamental Questions in the Bible Study by Rabbi Amnon Bazak and Ani Maamin: Biblical Criticism, Historical Truth, and the Thirteen Principles of Faith by Rabbi Dr. Joshua Berman are precisely the balms they need for their troubling questions. However, in the communities in which they reside, these titles are likely not on anyone’s radar.

Fader quotes a prominent modern-orthodox therapist who said at the 2015 Agudas Yisroel convention, that “sometimes Orthodoxy just doesn’t work for a person.” The truth is that the Torah works, but people need to be taught in a manner that works for them.

Even the term OTD – off the Derech is imperfect. There is not a derech – instead, there are many paths. When people are forced down a route that does not suit them or meet their unique spiritual needs, that can be the start of a double life. The tragedy of the many stories Fader details is that there is no conflict. The underlying issue is that they may be in the wrong community.

Mark Twain supposedly said that “If you tell the truth, you don’t have to remember anything.” The message is that if you tell lies, you must remember all the lies you told and to whom. Similarly, Fader writes of how these double lifers deal with conflicts inherent to leading a double life. Many times this leads to depression, family conflict, and more.

What Fader describes here is a new aspect to an old problem. The questions the double lifers have and the struggles they face are legitimate. Moreover, the tragedy is that while within their communities, they are but a phone call away from a referral to the best physicians the world has for life-threatening physical conditions. When it comes to afflictions of the soul, they have no one to call. Even Project Makom, an organization that helps questioning Jews and often double lifers find their place in Orthodoxy, is never mentioned here.

Fader has written a groundbreaking work that delves into the parts of the Orthodox world that many do not even know exist. It is unclear how many double lifers there are or how prevalent an issue it is. However, one is hard-pressed to think that it is going away anytime soon.