There’s a story where a man comes to a Hasidic Rebbe and pours out his problems to him. The Rebbe replies that his problems are in truth not so insurmountable, as all he has to do is pray for divine intervention. The man replied to his chagrin that he doesn’t know how to pray. To which the Rebbe replied “oy, do you have real problems”.

Prayer is a fundamental part of most religions, and in particularly fundamental to Judaism. Daily prayer is an integral part of the Jewish lifecycle. With that, anything that can improve a petitioner’s prayer experience is certainly beneficial and welcome. In the Koren Rav Kook Siddur (Koren Publishers 978-9653017542), many will find a siddur that will certainly elevate their prayer experience. The English translation of the prayers are from Rabbi Lord Jonathan Sacks previously published English translation. 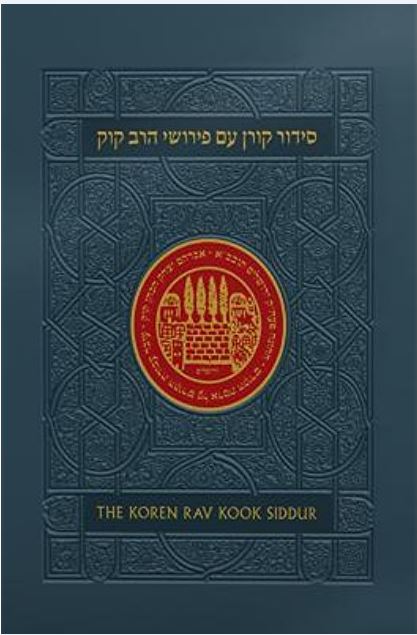 As the title indicates, this siddur is based on the teaching of Rabbi Abraham Isaac Hakohen Kook. It is translated and adapted by Rabbi Bezalel Naor. The brilliance of this siddur is due in a large part to Naor’s masterful work. A master of R’ Kook’s thought and wordview, Naor as a scholar in his own right is able to take the difficult, dense and mystical language of R’ Kook, and translate it into a most meaningful English that is relatively easily accessible.

A most spiritual person, R’ Kook was a poetic soul whose very essence embraced love, spirituality, and holiness. With that, his approach to prayer is a most unique one for a generation such as ours with a spiritual thirst. The bulk of the commentary Naor uses is from Olat Re’iyah – Kook’s commentary to the Siddur.

There are a number of streams running through R’ Kook’s thoughts on prayer: philosophical, mystical and psychological.; to which Naor seamlessly integrates all three. In the introduction, Naor writes of the tension between the mystical and rational approaches to prayer. He quotes Kook who observed that eventually one graduates from the rationalist understanding of prayer, which yet differentiates between the inner and outer worlds, to the higher outlook whereby there is no longer any difference between these worlds. That progression though is not something that happens overnight. It must be developed and nurtured.

In the world of R’ Kook; words, symbols and language have very specific and particular meanings. Naor does a tremendous job of explaining those concepts. For example, based on a verse from Ezekiel and a statement in Tractate Berakhot, Naor develops Kook’s idea that the feet serve multiple functions, namely walking and standing. And that the Torah is synonymous with walking, while prayer on the other hand is synonymous with standing. Naor gives other examples of the inherent differences between Torah study and prayer.

Once of the revolutions that R’ Kook south to bring about in Jewish life was reclaiming what he called kedushat ha’guf – the holiness of the body. Kook believed, to which a current view correlates, that the long exile had produces an overly cerebral Judaism, to the detriment of the body. Kook believed that we have holy flesh no less than we have a holy spirit. Kook used his approach to prayer as a mechanism towards kedushat ha’guf.

In this superb commentary on the siddur, much credit needs to be given to Rabbi Naor. While R’ Kook was a world-class Talmudist and halakhist, he was also a master of kabbalah. His writings extensive used abstract kabalistic terms, which combined with the effusive and poetic manner overflowing with abstract Kabbalistic concepts in which he wrote, makes it a challenge to comprehend. Such writings, particularly his book Orot, is a most challenging read, with its difficult Hebrew and complex ideas. Naor is able to translate and adapt those ideas and put them in a most readable and meaningful manner.

During his life and tenure as chief Rabbi, Kook faced many opponents, and was the subject of protests and condemnations. His book Orot even caused quite a stir then. As Naor writes, today from the distance of time, we can view Kooks’s writing in a much more dispassionate nature.  But perhaps the most impressive thing is that 80 years after Kook’s death, his writings are still popular and indispensable. Finally, the ultimate vindication of Kook may be that while his adversaries were numerous, and many of them great scholars in their own right. They writings seem to have been lost in time, while Kook’s remain and flourish.

Finally, as the leading expositor of R’ Kook in English, Naor offers a number of insights of his own thought the siddur, which perfectly complement the commentary.

For those looking to enhance their davening experience, the Koren Rav Kook Siddur brings to the English-reading audience the fascinating, brilliant and most timely and meaningful insights on prayer from R’ Kook.