Anyone who walks the streets of any major Orthodox neighborhood today can’t go far without passing a yeshiva. To the uninitiated, they may think these yeshivas go back for millennia. But that is not necessarily the case.

In Lithuanian Yeshivas of the Nineteenth Century: Creating a Tradition of Learning (Littman 978-1906764609), Shaul Stampfer (professor at the Dinur Center For Research In Jewish History at The Hebrew University of Jerusalem) has written a detailed and brilliantly researched account of the development of the current yeshiva system. 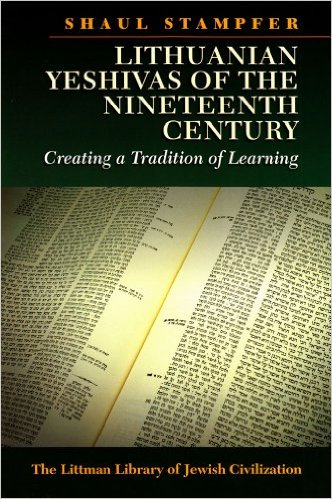 This is an English translation of Stampfer’s Hebrew work which first appeared in 1995. It also includes additional material that became available with the opening of archives in Eastern Europe after the fall of Communism.

Those with an interest in modern Talmudic study will find the book, as I did, a spellbinding overview of the development of the modern yeshiva. Stampfer’s impeccable research changes the way one will look at the reasons for the creation of and the development of these yeshivas in Lithuania. The book is like a riveting documentary, full of fascinating insights.

The first modern Ashkenazi yeshiva was established relatively recently in 1803; with the founding of the Volozhin yeshiva by Rabbi Chaim Ickovits; but better known as Rabbi Chaim Volozhin.

Stampfer notes in the introduction that the yeshivas that developed in nineteenth-century Lithuania offered a completely new structure for the study of Talmud. He writes that the two main impetuses for this were a conservative reaction to the modernizing trends that were confronting the traditional world of Eastern Europe, and faith in the important of educational institutions.

The 1800’s to early 1900’s was a century of change and revolution. Every aspect of society was affected, from the isolated farmer to the yeshiva students of these Lithuanian yeshivas. I found Stampfer’s description of the environment to be quiet enlightening and it certainly challenged my notion of what old-time yeshivas were about. The levels of Talmudic scholarship were legendary, but these were not stale, monolithic institutions.

Stampfer writes that the yeshiva system developed in response to the collapse of the batei medrash (informal study halls) and was seen as an essential element in preserving the traditional values of a conservative society. In the early nineteenth century, the yeshiva was therefore presented as simply a place of Torah study, with no suggestion of practical advantage or reward.

While many of today’s yeshivas are styled after their Lithuanian predecessors and there is an assumption amongst many people that today’s yeshivas operate in relatively the same manner as they did 200 years ago; Stampfer shows how their methods were often quite different. Two of the most striking are, first of all, the fact that the Talmud was studied systematically and completely; starting with Tractate Berachot, all the way to Tractate Niddah. In addition, the method of study in these yeshivas was not with a chavruta (study partner) as is de rigueur today, rather the yeshiva students would study independently.

The book covers every aspect of the yeshivas, from the number of students, admissions protocols, budgets of the yeshiva, student political organizations, student housing, tuition and much more.

The long-term influence of the Lithuanian yeshiva is unquestionable and Stampfer does an incredible job of detailing the milieu where these yeshivas developed. The book is impressive in exhibiting a large amount of research, as well as depth of content.

Those with an interest in Talmud study and the yeshiva system will unquestionably find Lithuanian Yeshivas of the Nineteenth Century: Creating a Tradition of Learning a fascinating and a compelling read.