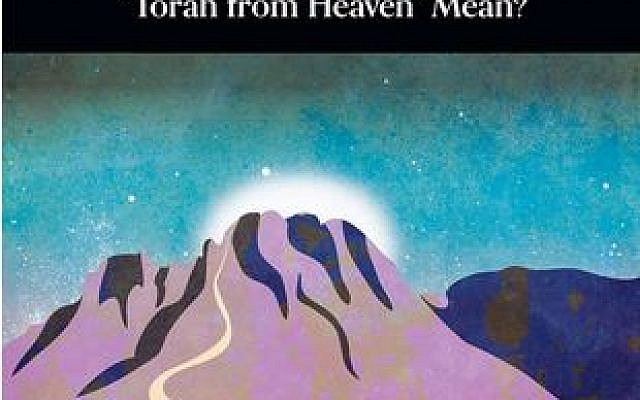 There are countless terms we use, both religious and mundane, that while they roll off our tongue, they have a deeper meaning that often may beguile us when pressed to define them. One of those terms in Judaism is Torah min ha’shamayim – Torah is from heaven. But what does that really mean? It clearly is not meant to be taken literally. So what does it truly mean?

In The Revelation at Sinai: What Does “Torah from Heaven” Mean? (Ktav Publishing) editors Yoram Hazony, Gil Student & Alex Sztuden, along with other scholars, spend nearly 400 pages analyzing what it means. It is a fundamental question that needs to be answered, as the notion of the Torah from heaven via the revelation at Sinai is the very basis of the Jewish religion.

From one perspective, Torah must be from heaven, even as the midrash states that the Patriarchs kept all of the Torah. The reason is that God did not leave his nation with the responsibility to determine his will, but instead revealed it to them directly in the Torah.

The book is a fascinating read, and has 11 chapters from 11 different authors. From those who are non-academic scholars such as Gil Student & Alex Sztuden, orthodox rabbis such as Rabbi Shalom Carmy, to those purely in the academic world, including Shawn Zelig Aster (professor in the Land of Israel Studies Department at Bar Ilan University) and others.

The book opens with Yoram Hazony’s chapter on Torah from Heaven: Moses and Sinai in Exodus. Part of the chapter deal with the non-Orthodox notion that the revelation at Sinai was not a single event. Instead, there has been an unfolding revelation since Sinai.

Hazony articulately pushes back against that idea – noting that the theory of an unfolding revelation strips Israel of its prophets, replacing him with a large number of individuals who cannot and do not encompass a commanding view of God’s teaching in their own mind. Moreover, if a commanding view of God’s teaching was never in the mind of any man or woman in ancient Israel, then the Torah was, in fact, never given to Israel.

While it is from Ktav Publishing, the book is written with an academic approach, and getting through some of the chapters was a challenge. Two chapters befuddled me, but the lacking was not due to the philosophers who wrote them, but rather my limited understanding.

I found Gil Student’s chapter on Rethinking Revelation: Three Talmudic Scholars Grapple with Biblical Criticism to be the most readable in the book. He writes that revelation lies at the heart of Judaism and that our knowledge of God and our tasks in the world comes primarily from revealed truths.

Those involved with Biblical criticism note the many gaps, repetitions, contradictions, and heterogeneity of the Biblical texts. Nevertheless, Student emphasizes that rather than being problematic, these gaps, repetitions, contradictions, and more must be read as a central part of the system of the Bible itself. In fact, significant amounts of Talmudic and midrashic texts deal with those challenges.

Rabbi Joseph Soloveitchik said that if he were to add to Maimonides 13 Principles of Faith, his 14th principle would be that the values and legal constructs of the Torah are timeless and have absolute relevance to every generation and location. The revelation at Sinai is a pivotal event that has relevance historically and to our very day.

In fact, if revelation at Sinai is taken away, then the entire Sinai experience is simply a glorified Burning Man festival. Moreover, many have tried to turn the Sinai revelation into that. This is a fascinating book where the authors articulately and astutely push back against the false notions of non-divine revelation, continuous revelation, and more. They show that Torah from heaven means Torah from God and none other.

The Haredi press has long used and continues to use the notion that the Torah and the Haredi populace are under attack from secular forces. It is not an exaggeration to say that the notion of divine revelation at Sinai has long been and is currently under attack. As if you take away divine revelation at Sinai, then you are left with a nomadic people who have yet another moral guide.

The book closes with a critique by Alex Sztuden of Revelation and Authority: Sinai in Jewish Scripture and Tradition, by Dr. Benjamin Sommer of the Jewish Theological Seminary. Sommer there develops his concept of the participatory theology of revelation. According to Sommer, the Torah is not just a revelation at Sinai, but also part of the Jews in Sinai. Using a modern corollary, it is similar to Linux – an open-source modular operating system that anyone can modify.

When analyzing Sommer’s approach, Sztuden notes that a close reading of Sommer’s entire argument reveals an overreaching methodological pattern, which is that he takes minor, or exceptional, or complementary, elements of the Jewish tradition, weaves them together and places them at the center of his understanding of the direction that the Jewish tradition should take. While Sommer has some sophisticated arguments – it takes a scholar like Sztuden, who can go head to head with him, to deflect those arguments.

The editors have assembled an all-star cast of brilliant authors, who do an excellent job of those who attempt to take the divine out of the Revelation at Sinai. And for that, they should be commended.