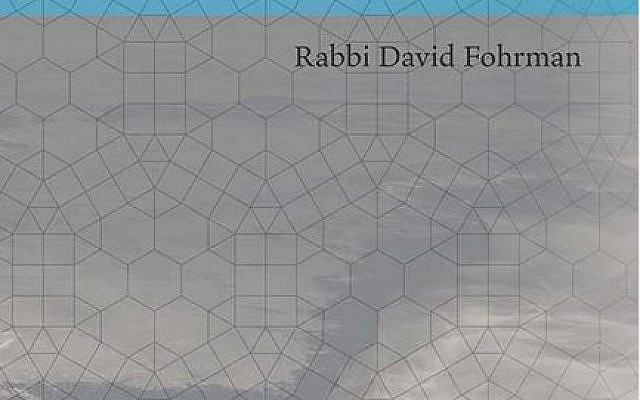 Rabbi Yosef Soloveitchik has often been quoted as saying that if he could add to Maimonides 13 Principles of Jewish Faith, it would be that Torah is timeless and entirely relevant for every generation.

As we begin this week the annual Torah reading cycle, that observation of Rabbi Soloveitchik came to mind with two fascinating and provocative new books on the Book of Bereshis.

As a brilliant speaker and author, Fohrman has somehow evaded overall more significant public popularity. That may change with his just-released Genesis: A Parsha Companion (Maggid Books).

In comparison, other books focus on the what and how of the story, Fohrman focuses on the why of the story. Here, he writes what that means to him. But by understanding and using his approach, the reader can use it to gain more meaning from the stories and events in the book of Bereshis.

With expertise in the text, Fohrman does an excellent job of extracting tremendous insights from a single word, and with his nuanced understandings, extract significant meaning. For example, he analyzes the word in Genesis 3:17 b’itzavon, meaning sadness, in the context of the land being cursed after Adam’s sin. He asks what is so sad about working the land? If may be difficult to work incessantly, but why is it necessarily sad?

When it comes to the story of Yosef’s sale, Fohrman invites the reader to go along with him on a forensic reading of the story. He notes the Yosef story is full of knotty, inconvenient details that confuse the reader in many subtle and not so subtle ways. Fohrman then helps the reader unravel those knots to discover more profound meanings in these narratives.

Genesis: A Parsha Companion is a very different, yet very engaging and original approach to the Book of Bereshis than what you have likely read in the past. And with this first book in the 5-book series, Fohrman will hopefully be one of the 10 Best Rabbis You Recently Heard Of.

Similar to Fohrman’s book, Ideas: Bereshit by Sina Kahen, is another stimulating book. Made of up short, refreshing chapters, the book provides a sophisticated and intellectually compelling approach.

As a biomedical scientist, Kahen writes that the human brain can understand a structure formed by different elements arranging in a pattern, then represent the arrangement with a symbol and then use that symbol as a component in an even more elaborate structure. These patterns are ideas. As the title indicates, the book takes these high-level abstractions and invites the reader to run with and develop these ideas.

A term Kahen uses many times is anti-pop. Many ideas floated today are akin to pop-Torah – simplistic, short, and unsophisticated. Cute blurbs meant for the reader who thrives on TL;DR, which is precisely the approach he does not take.

As to sophisticated ideas he writes of, Kahen is a student of and quotes substantially from Rabbi Joseph Dweck (of the S&P Sephardi Community of the United Kingdom), a person of deep thought, meaningful ideas, a man who takes his religion very seriously.  Dweck influence on the author is evidence in every chapter.

Kahen’s sources are as eclectic as are the ideas. From Hakham Ya’akov Anatoli, Yeshayahu Leibowitz, to the International Journal of Dream Research and more.

The only lacking in the book is that Kahen does not give any biographical information about the subjects he is quoting. He asks the reader to research those quoted in the book on their own. However, just their birthdates would let the reader know how to assign a weight to those quotes. Be it Hakham Ya’akov Anatoli, who lived during an earlier period of the Rishonim, to the recently deceased Sepharadi Hakham José Faur, and others. But kudos to Kahen on his many quotes from Faur, a rabbi and scholar far too many people never heard of or appreciated.

As to the notion of pop-Torah, the post-religious world we live in can only lead us to conclude that pop religion does not suffice in providing the answers to our generation’s primal need for comprehension; it cannot survive a developing world. Kahen’s approach is that of intellect and scientific integration of science and philosophy. He uses, as Rabbi Aharon Lichtenstein often said, quoting Matthew Arnold, to find “the best that has been thought and said in the world.”

This pop-Torah approach often means that everything has to fit nicely and that there are always happy endings. As Kahen so eloquently writes in Parshas Toldos, we must be honest enough to accept that life presents us with choices that are not always ideal. The story in Toldos teaches us that the correct decision ultimately rests on a realistic analysis of each choice’s consequences.

In Ideas: Bereshit, Sina Kahen offers the reader an original and stimulating approach to the Torah’s foundational first book. Hopefully, he, like Rabbi Fohrman, will keep writing on the subsequent books of the Torah.