Cardinal Richelieu was a 16th-century French statesman who said that “if you give me six lines written by the hand of the most honest of men, I will find something in them which will hang him”. In Why Open Orthodoxy Is Not Orthodox (Yad Yosef Publications 978-0692727041), Rabbi David Rosenthal has written a polemic that would make Cardinal Richelieu proud. 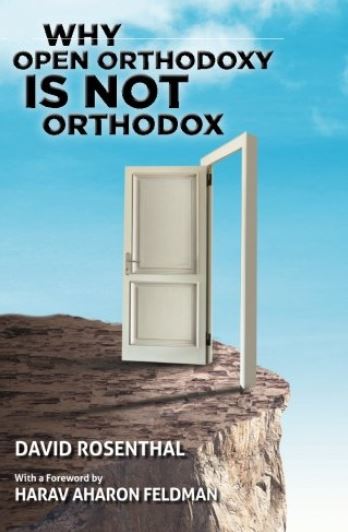 Rosenthal has taken the role of, as Menachem Kellner would call it, heresy hunter, in an attempt to find heresy within the Open Orthodoxy (OO) movement. After scouring the web and social media, Rosenthal drops page after page of inflammatory, and seemingly unorthodox quotes from many players in the world of OO. The book is as provocative as it is intellectually vapid. Far too many quotes lack context, many are taken out of context, and some of them are actually quite astute.

The truth be told, finding heretical statements within OO is really not that difficult. What is difficult is writing cogent reasons of the supposed dangers of the movement. The problem with Rosenthal’s assault on OO is that he overwhelms the reader with data, but doesn’t do that in any sort of structured manner. The fact that there are problems with OO could have been shown with 10% of his evidence, and a greater focus on the particulars of those problems.

The common disclaimer on math exams “you must show your work to receive credit. A correct answer without showing your reasoning will not receive credit” is a good descriptor of this book. He gathers countless quotes from social media, Facebook, and other web sites from where the talk is often informal. What I found particularly disingenuous was his countless quotes from Yeshivat Chovevei Torah (YCT) students.

Rosenthal portrays OO rabbis as trying to pry simple Jews into a heretical lifestyle. He contends that OO rabbis are taking over synagogues in small towns to unsuspecting Jews thinking their OO rabbi is truly Orthodox. The allegations are that these OO rabbis have duped congregations into hiring them into thinking that they are strictly orthodox. The danger as he sees it is that these congregations will be “misled right into the abyss into which multitudes of Conservative and Reform Jews have disappeared”.

If these OO rabbis are duping synagogues across the country, then they seem to be quite silent about it. Rosenthal provides no evidence of a single synagogue claiming mekach ta’ut as to the hiring process of their rabbi. With countless quotes from social media, there’s not a single one from a disenfranchised congregant.

What Rosenthal does not seem to understand is that movements develop due to their surroundings. Rabbi Avi Weiss is the founder of Open Orthodoxy, and in Open Orthodoxy! A Modern Orthodox Rabbi’s Creed he writes that OO is a form of Modern Orthodoxy that emphasizes halakha, intellectual openness, a deeper spiritual dimension, broad concern for all Jews, and a more expansive role for women. Weiss attempted to create a kinder, more gentler Orthodoxy.

In many of these small towns such as Nashville, Tennessee where a YCT rabbis holds a pulpit, it’s not clear Orthodox rabbis actually applied there. In conversations with others knowledgeable, it’s not necessarily that OO rabbis are winning these pulpits; rather that the orthodox rabbis have for the most part abandoned these cities.

Rosenthal quotes extensively from Rabbi Zev Farber, including an article The Opening of Devarim: A Recounting or Different Version of the Wilderness Experience?, where Farber writes that “the simplest explanation for these differences between the accounts in Exodus-Numbers and Deuteronomy is that they were penned by (at least) two different authors with different conceptions of the desert experience”. Note to Rabbi Farber – if you are going to write about biblical authorship, using any number greater than one is certainly going to make any Orthodox reader rightfully apoplectic.

Even former president of YCT President Rabbi Asher Lopatin noted that Farber’s views represented the “outer boundaries of Orthodox thinking on this subject” but were “different from, and in some ways contradictory to, what we teach and ask our students to believe at YCT”.

Rosenthal often attacks where no attack is due. Consider a comment by Rabbi Ysoscher Katz, Chair of Department of Talmud at YCT. Rosenthal writes with incredulousness that Katz “claims that the Brisk yeshiva is unsophisticated when it comes to theology”. What Rosenthal doesn’t seem to comprehend is that Katz’ observation is quite perceptive. Rabbi Chaim Soloveitchik never developed a system of theology or language to express any theological feelings. It was that frustration that Katz wrote of when experiencing a crisis.

All this leads to the question – is there really cause for concern about OO? The reality is that OO is a small movement. In their 14 years, YCT has ordained but 119 rabbis.

Have no doubt about it, there are serious theological and halachic issue with OO. Rabbi Ezra Schwartz (Rosh Yeshiva and Associate Director of RIETS) for one, noted that he is particularly disturbed by the attitude of some OO rabbis towards issues of avodah zara, including donating towards the building of churches. Their somewhat cavalier attitude regarding entering churches and participating in interfaith services often runs afoul of established halacha. Schwartz said he’s much more disturbed by that, than the problem of their ordaining women.

If the writings of OO rabbis are heresy, then they have penned that heresy in an often sophisticated and intellectually stimulating matter. Counterclaims to the contrary should be at least written in that manner, with an equal level of sophistication and intellectual honesty. If the heresy of the OO movement is to be countered, then so be it. But throwing mud at them certainly wonn’t suffice.