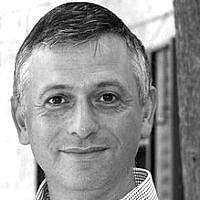 The Blogs
Yedidya Julian Sinclair
Apply for a Blog
Advertisement
Please note that the posts on The Blogs are contributed by third parties. The opinions, facts and any media content in them are presented solely by the authors, and neither The Times of Israel nor its partners assume any responsibility for them. Please contact us in case of abuse. In case of abuse,
Report this post.

Shaking myself awake in Jerusalem two Fridays ago to absorb the news that Britain had voted for Brexit and listening to the lamentations at the wave of populism and xenophobia that had apparently overrun my land of birth, I felt something important was absent from the story line. As I tried to grope for what was missing, my memory wandered back to a chilly and humiliating November night 30 years ago.

It was in the Oxford Union, the university’s fabled debating society, playground of aspiring British politicians. The Gladstone Room, was an imitation of the drawing room of a Gentleman’s Club with oak paneled walls, faded college crests on the ceiling, and concentric semicircles of red leather wing-backed arm chairs.

My partner and I had reached the Semi Finals of the Union’s Freshers’ Debating Competition. As social democrats, we found the Union’s atmosphere of entitlement oppressive and its speakers, bombastic fools.

Eyeing our semi-final opponents opposite, I fancied our chances. They were a pair of absurdly kitted out Young Fogeys. Both sported tweeds, brogues, and fawn waistcoats. One of them, boyishly smooth-cheeked, with round wire glasses and zealously parted hair, periodically consulted his watch with tense alertness.

The Union Librarian, also in tweed jacket under his trademark sheepdog mop of unruly blonde hair rose and boomed that the room should come to order. Boris Johnson was already celebrated figure on campus. Behind his buffoonish English eccentric exterior was said to lie a sharp mind, a calculating ambition and a reservoir of classical learning that enabled him to declaim reams of Latin and Greek verse from memory at parties.

Johnson, announced the motion and called on the smooth-cheeked neo-Edwardian opposite, whose name was Michael Gove, to open for the proposition.

I do not recall the exact motion, but fancy that it had something to do with the British Empire. For decades a source of shame and self-mockery, attitudes to the Empire were shifting. This was the heyday of Thatcherism. Maggie had crushed the striking miners, reconquered the Falkland Islands and decimated the Labour Party. Most students reviled her, but the resurgent Conservative minority saw her as an avatar of recovered national dignity, who had, against all predictions, reversed 30 years of relentless decline and made pride in Britain — even its Empire — possible once again.

Gove rose to his feet and, at 30 seconds notice, delivered a rousing neo-liberal manifesto for the beneficent effects of British democracy on the world. Speaking in mellifluous Edinburgh Morningside tones, and perfectly turned English sentences, he cited Adam Smith from memory, quoted Burke on tradition, praised the rooted common sense of English common law and the incalculable richness of the English language, winding up with a peroration of gathering, but finely controlled moral urgency, about how British ideals of political liberty were compelling enough to have conquered the world without a shot being fired. Fogeyish fancy dress or not, Gove was evidently a class act.

In reply, I made a lame joke about football and meandered on about a subject about which I knew little and cared less. Gove, who had been sitting like a coiled spring and scribbling notes on a leather bound jotter spotted the weak point, jumped out of his seat and, jabbing an accusatory forefinger in my direction, demolished my case. There was a roar from the spectators, who smelled fresh meat. We stumbled on, but Boris had only to confer with his fellow judges for the briefest moment before awarding victory to Gove and his partner.

Johnson and Gove unwittingly did me a favour that evening. They convinced me that the Oxford Union was not my place. I barely set foot there in my remaining three years at college. It was not just that I was comprehensively outclassed; I also felt out-cultured. I had read bits of Edmund Burke, Adam Smith and even a little Latin poetry to pass exams. Gove and Johnson seemed to have absorbed them into their very being, as essential to who they were and to the life of the country they manifestly aspired to lead. This realization eventually sent me to seek out my culture, Judaism, to move to Israel, and play a (very minor) part in my own people’s national renewal.

Following from afar Johnson and Gove’s much larger role in British public life, their careers seemed continuous with the precocious characters I briefly knew. Johnson became a successful mayor of London, one of the most ethnically diverse city in the world. He never shed his persona of non-conformist British toff, but broadened it to add a tolerant streak, welcoming of strangers. He rediscovered a Turkish ancestor and claimed that he was an immigrant too.

Gove became a reforming, controversial education minister, resisting curricula dumbing down, demanding that all pupils learn more British history and English literature, and insisting that all could enjoy an education a little more like the formidable schooling he had received.

These, not the xenophobic Nigel Farage, are the men who led Britain to Brexit. They imbibed the traditions of British liberalism and democracy from adolescence (as well as the viciousness of Oxford Union politics that led to their undoing). They came of age at a moment when decades of remorseless national decline were seemingly reversed, during a decade when it was acceptable to debate in Churchillian cadences, to recall how Britain had once saved the world, and dream of how it might do so once again.

Brexit could yet turn out horribly. Much depends on factors beyond the control of any individual: the animal spirits of investors, whether the EU responds in a spirit of pragmatism or punishment, and the unpredictable cascades of dominoes that may fall as a consequence of last week’s vote. Johnson and Gove hoped to write their role in history as restorers of British democracy and the supremacy of parliament after decades of creeping sovereignty loss to Brussels. They may just as well be remembered as the men who led their country to catastrophe and unleashed chaos on the world.

Yet it would be a mistake to see the vote as being primarily a victory for racism or stupidity, though no doubt many voters were animated by both. Nor does Johnson and Gove’s appalling behavior since the referendum (with Johnson fleeing from the field of victory and Gove knifing his old friend and ally in a bid for the Tory leadership) completely vitiate their campaign. It reminds me of an old feeling that the dressing up and posturing of the Oxford Union was mainly a fig leaf for naked ambition. Mainly, but not entirely. Recalling the ardent sincerity of my debating nemesis, I tend to think these guys were for real. Johnson and Gove’s appeals to Britain’s democratic values authentically reflected their own pasts and passions and resonated deeply with millions of their compatriots.