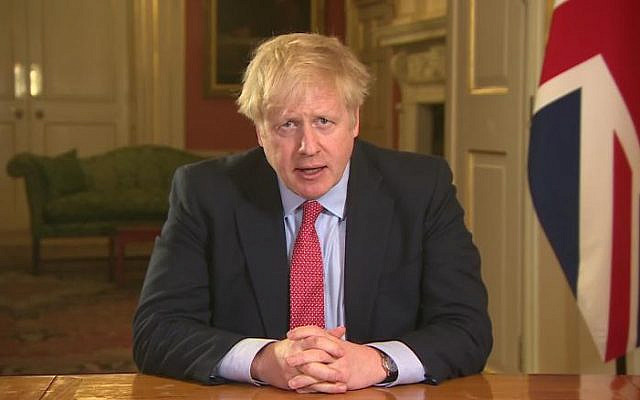 UK Prime Minister Boris Johnson announced yesterday that the country would enter a stage of ‘lockdown’ to help combat the coronavirus outbreak. In his six-minute statement to the nation, he ordered citizens to only leave their homes for essential work and for the purpose to buy food and medicine. All public gatherings are to be banned, and he has awarded the police the ability to disperse these meetings through fines.

To put it in other words, the UK has finally caught up with the rest of the world.

Israel was one of the first countries to adopt harsh measures to contain COVID-19. Over a week ago, prime minister Netanyahu ordered citizens to stay indoors and only leave for essential food shopping and medical needs. A few days later, he closed public parks and beaches. The police are driving up our streets making sure there are no gatherings of more than five people at a time.

This might have seemed strict then, but Netanyahu was reacting to the worrying news coming out of Italy – a country that has been overwhelmed by more than 63,000 reported cases and 6,000 confirmed deaths. Today, its hospitals are flooded with patients who are in need of ventilators and medicine.

Even US President Donald Trump, who once stated that that hype behind the Corona panic was a ‘new hoax’ set up by the Democrats and the media, has started implementing restrictions and cooperating with Governors as they close their borders and enter lockdowns. Not exactly something a president wants to see six months before a bid for re-election.

It seemed bizarre, therefore, when prime minister Johnson seemed relatively nonchalant about the threat that the virus posed to a country and his reluctance to close public spaces and private companies. Until last night, he simply ‘urged’ people to stay indoors. He ‘recommended’ that people don’t support local businesses. He appeared to be following entirely different advice and adopting a varied strategy from the rest of the developed world.

He did so until it was too late to avoid the obvious: this was go-time, and the UK had to catch up with the rest of the world.

We don’t yet know what cost Boris’ inaction and indecision has caused the UK as a country. At the time of writing, more than 335 people have died from COVID-19 there. It has the 10th highest number of reported cases but the 7th highest number of deaths. Comparatively, the UK is not doing a good job of containing the virus, nor is the survival rate particularly optimistic.

Boris Johnson can claim one major victory in the few months of his premiership. His massive new majority in the House of Commons after the 2019 election allowed him to operate safely within a parliamentary majority and ‘get Brexit done’. Aside from that, it is hard to see much of a success story so far. He tricked the Queen into breaking the law. He is allowing the help of a Chinese company to build our 5G networks against the advice of our US allies. Then, he delayed implementing policies that could save lives during this current outbreak.

Shakespeare’s Hamlet faced a similar predicament. Even though he is told, in no uncertain terms, that his father was murdered and he should take revenge, he ponders his options. He waits it out to see how events unfold. He thinks (and rethinks) until it is too late. Hamlet’s indecisiveness – and his inaction – cost the lives of the ones he loved most.

Boris encompasses the very trait that embodies Hamlet: the tragic flaw of being unable to act when the time is right, risking dramatic and consequential repercussions that could – and should – have been avoided.

If the prime minister had adopted stricter measures early on, then perhaps the UK would have a more positive outcome. Israel’s strong measures, while strict, have potentially saved lives. Its single reported death – an 88-year-old man with pre-existing conditions – is, by all means, an accomplishment. Flattening the curve seems like a better approach to battling the Coronavirus than herd immunity – a tactic applied by the British Government until it was woefully too late to change course.

At the moment, the UK is on the same trajectory as Italy in terms of death rates and overwhelming its national health service. All we can do now is hope people listen and finally #StayHome.