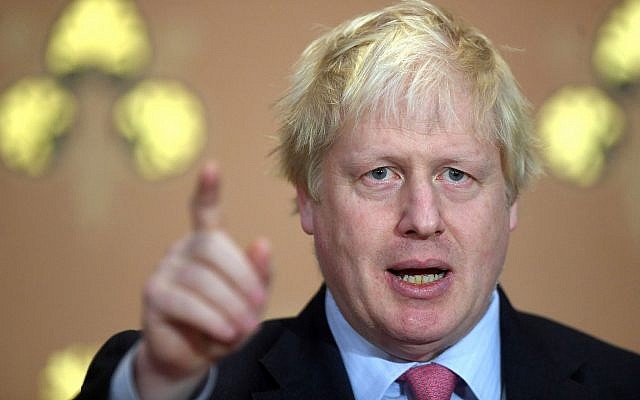 Boris Johnson has finally fulfilled his political ambitions by becoming the UK’s 77th Prime Minister. His biggest short term priority will be ensuring that the UK leaves the European Union by October 31st and in as orderly a fashion as possible. But it is a fair question to ask whether the new PM, who is an avowed philosemite and admirer of Jewish culture, will look equally with favour on Israel. When one looks back at Johnson’s record, one finds a rather mixed picture and one which reflects the inconsistencies for which he is sometimes accused.

Firstly, it is necessarily to dispel a myth: that Boris Johnson is nothing but a British version of President Trump. Certainly, there are superficial similarities. Both have a somewhat maverick and ebullient style, both stand accused of ignoring detail and of serial lying, both have been accused of bigotry towards minorities and both are willing to ride a coach and horses through their respective political establishments. But the similarities mask obvious differences.

For one, Johnson is a classically trained scholar whose knowledge of modern history and culture is compelling. For another, he is an experienced politician, having served as MP since 2001, Mayor of London for 8 years and, most recently, as Foreign Secretary. Moreover, Johnson’s occasionally offensive remarks mask the fact that, as a classic liberal, he champions individual freedom and liberty and has often been positive towards ethnic minorities and LGBT people. He specifically condemned President Trump’s Muslim migration ban. And as a journalist of 30 years standing, he has little time for the incessant attacks on the press which have become routine in Washington.

This makes a difference to the Jews in one important sense. Johnson is a Brexiteer because he believes that EU membership is anti-democratic and undermines Parliamentary sovereignty. He champions liberalism, openness and democratic institutions, the kind of political environment in which Jews traditionally thrive and to which they make the most positive contribution. It helps that he is proud of his Jewish maternal great grandfather, a Lithuanian rabbi.

In the past, Johnson has lauded Israel as a ‘great country’ and described himself as a ‘passionate Zionist’. He visited the country as a university student in 1984 and spent some time volunteering on Kibbutz Kfar Hanassi in northern Israel. He would later speak of the ‘bonds of hard work, self-reliance and audacious and relentless energy’ holding together ‘a remarkable country’ and, in a comparison of Israel with Churchill, praised the ‘daring, audacity, derring-do and indomitability’ of the Jewish state. As Mayor of London, he arrived in Israel for a three day trade mission in November 2015 with a team of high tech entrepreneurs. He later said that London was the ‘natural tech partner for Israeli firms.’ This extensive economic and technological collaboration is likely to increase now that Johnson is Prime Minister.

Johnson has also condemned the BDS movement in the strongest terms, describing it as a ‘completely crazy’ campaign led by ‘ridiculous, snuggle-toothed, corduroy-wearing lefty academics.’ Those comments, made in 2015, led to a series of meetings in Ramallah being cancelled. He has also understood the endemic anti-Israel bias found within the UN. In a visit to the UN Human Rights Council in its first session of 2018, he urged the body to ditch Item 7 (which singles out Israel for criticism) as it was ‘disproportionate and damaging to the cause of peace.’

But at times, he has said things that have offended supporters of Israel. In 2014 at the height of Israel’s war with Hamas, Johnson deprecated Israel’s actions as ‘disproportionate, ugly and tragic’ and described the war as ‘utterly horrifying and unacceptable.’ He has condemned ‘incitement and rocket fire against Israel’ but also called for an ‘independent inquiry’ over 120 Palestinian deaths on the Gaza border. Johnson was also seen as playing an important role in drafting UN Security Council resolution 2334 which said that all settlements established since 1967, including in East Jerusalem, ‘were a flagrant violation under international law.’

The resolution was widely condemned within the UK Jewish community whose representatives considered it a betrayal and disgrace. He is a strong supporter of the two state solution, which marks him out as having a thoroughly conventional perspective on the conflict. But this led to a somewhat nuanced celebration of the 100th anniversary of the Balfour Declaration in which he lamented that the Arab population had been denied self determination, even though the Declaration did not speak of the ‘national rights’ of the Arab population.

On Iran, it is hard to read the exact contours of a foreign policy. In the past, he has expressed support for the JCPOA signed in 2015 and rallied round the EU in rejecting Trump’s decision to leave the agreement. In 2018, he said that Britain had ‘no intention of walking away’ from the nuclear deal and as recently as July 2019, urged Iran not to abandon the JCPOA. In a recent interview with the UK based Jewish News, Johnson continued to defend the agreement but hinted that if there was evidence of Iranian non-compliance, Britain stood ready to re-impose sanctions on the Islamic Republic. Yet this can only mean that, contrary to all previous positions, the UK would be abandoning the JCPOA. Now that tensions between Iran and the West have ramped up in recent months, it remains to be seen whether Johnson’s government will pivot more towards Europe or the USA.

When it comes to terror groups, his record is again inconsistent. He rejected calls consistently to ban Al Quds Day marches in London or to prevent the Hezbollah flag from flying, despite the raucous antisemitic rhetoric on display. Yet when the Muslim Home Secretary did proscribe Hezbollah as a terrorist organisation, Boris Johnson tweeted his congratulations.

What are we to make of all this? It is fair to conclude that Johnson is a genuine friend of Israel and a man committed to its peace, security and prosperity. But in his views on settlements, Gaza and Iran, his perspective is largely aligned with that of the Foreign Office.