Until last month, if I had heard of the singer Lorde, it was only at its most peripheral. I couldn’t – and still can’t – identify a single one of her songs, but then I am not the 21-year-old’s target audience.

But with one meaty paw, the self-styled “America’s rabbi”, Shmuley Boteach, has ensured that even those who are not Lorde’s natural fans have been made aware of her.

He did this by taking out a full page advert in the 31 December issue of The New York Times, denouncing Lorde as “a bigot” for cancelling a previously-arranged concert in Tel Aviv.

Lorde made her unfortunate decision after she was approached by two fellow New Zealanders who are supporters of the boycott movement – one of whom, inevitably, is Jewish.

She responded: “I have had a lot of discussions with people holding many views, and I think the right decision at this time is to cancel the show. I’m not too proud to admit I didn’t make the right call on this one.”

It’s a shame, and her fans in Israel are understandably disappointed. But the way to deal with this, surely, is the way that the Israeli Ambassador to New Zealand, Dr Itzhak Gerberg, has tried to do, by inviting Lorde to come and see him and talk things through.

Not, for heaven’s sake, by taking out a New York Times advert and bludgeoning her with self-righteous opinion. A strident Boteach wrote in the advert: “Let’s boycott the boycotters and tell Lorde and her fellow bigots that Jew-hatred has no place in the 21st century.”

Well, if he really wanted to drive Lorde into the arms of Roger Waters and friends, this is exactly the right way to go about it.

And that, I am sorry to say, is one of those press-the-red-button words that once used, is nigh impossible to take back. 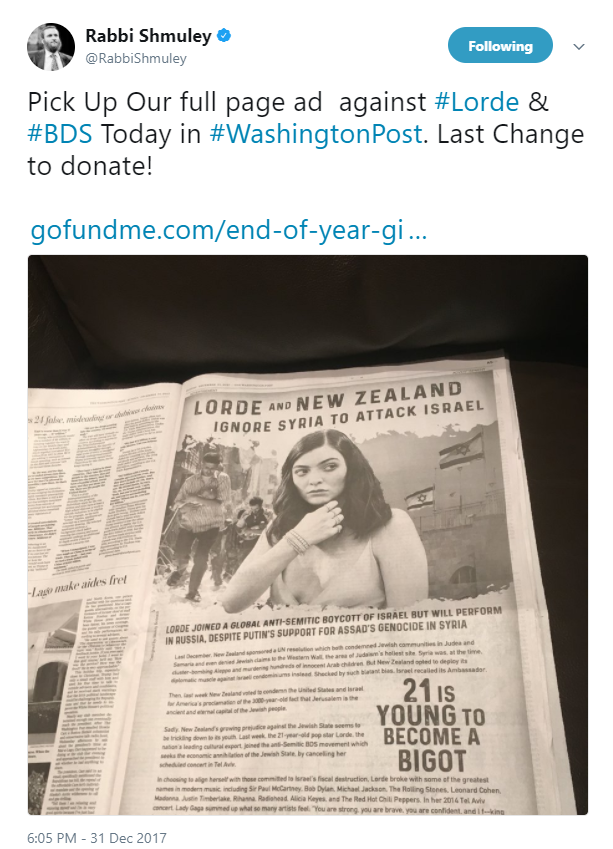 Will it help Israel to call a popular young singer a bigot? Will it enhance Israel’s  standing in the eyes of Lorde’s worldwide fans?

Or will it, as I suspect, push Lorde into taking sides over an issue she previously hadn’t shown much interest in, and force her into a position that she can’t get out of? This was – even by the standards of the
alt-right crowd with whom Boteach now likes to ally himself – a new low for dumbness and failure to think things through.It is, indeed, perfectly true that Lorde is due to give a concert in Russia, where there are any number of human rights abuses.

Will she give a statement about that, or cancel her concert there? Given the bucket of cat sick that greeted her Tel Aviv decision, I don’t suppose Lorde will be making a statement on anything any time soon. We must also question the appropriate  use of funds – not Boteach’s, because he  went begging for money to finance the
advert – in order to make this global attack on Lorde. I can think of so many better ways to spend the thousands of dollars this must
have cost. If Israel’s ambassador has any sense, he will quietly invite Lorde to go to Israel as a private visitor, and see things for herself.
And then, if she wants to, she can take out an advert in The New York Times — telling Rabbi Boteach exactly what she thinks.

I’m happy to help her write it.