I awoke early this past Thursday morning and checked Facebook to see what I’d missed overnight. One of the first posts to appear was my friend Jonathan Greenberg’s repost of Irit Shafir Jacobson’s picture and call to action against a new billboard on downtown Chicago’s 294 that read “Boycott Israel.’ Irit asked people to call the owner of the advertising firm, Lamar Advertising, and ask them to take the billboard down.

Ever since my tefillin returning adventure (Florida Rabbi Seeks Tefillin Owners) I’ve enjoyed using my Facebook page to galvanize our community to help people and advocate for Israel. I’ve especially used it to charge my students and show them that rising to a challenge, voicing their concerns and moving to action can bring about change. My students are adept at calling – en masse – those with whom they have a grievance. My students quickly realize that the whole of their parts is greater than their individual efforts. When offices are bombarded with hundreds of calls within an hour or two, people take notice.

I posted Irit’s picture and called on people to call Lamar Advertising and demand that the billboard be taken down. Within hours my students and people all over the world had placed thousands of phone calls to Lamar at their offices all across the country. Their Facebook page was inundated with poor reviews and demands for the billboard to come down. At first Lamar responded with an argument that, “Lamar has been in the billboard business for over 100 years and we have developed a strong commitment to supporting the First Amendment right of advertisers who wish to use our medium to promote legal products and services or to convey noncommercial messages such as the one in Chicago.”

After Paul Miller wrote an article in The Observer, “Lamar Outdoor Advertising Under Fire For Anti-Israel Billboard” a CBS news story, “Boycott Israel Billboard Chicago Sparks Controversy” and a few thousand more calls, Lamar changed it’s tune and announced that it will be removing the billboard as soon as possible. By the start of the weekend, the Boycott Israel billboard was taken down. 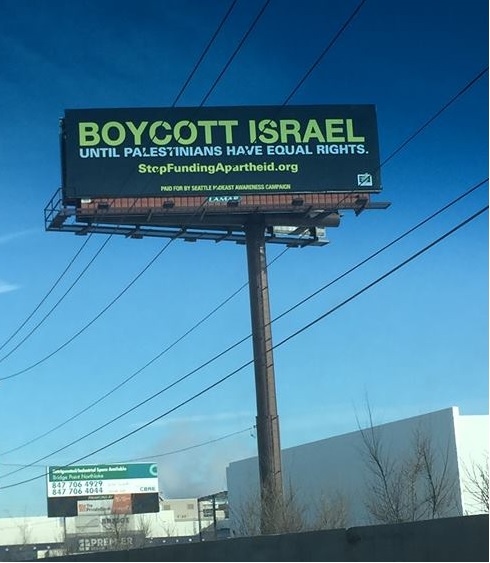 The billboard with its distasteful message. 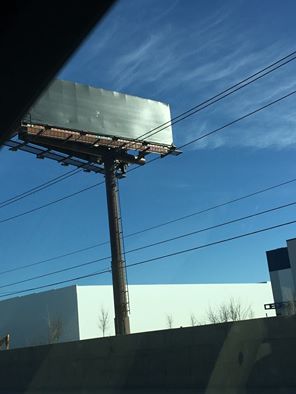 The billboard after Lamar Advertising decided to take down their offensive message.

While victory was sweet, in every silver cloud there’s always a dark lining. One disappointing reaction to this episode was the criticism levelled against our call to action. While I was expecting the Anti-Israel community to use every trick in the book to sabotage our efforts, I didn’t expect criticism to come from our own community, and from organizations charged with protecting our community from Anti-Semitic and defamatory statements (!). I heard plenty of charges that by demanding the billboard to be taken down, we were suppressing free speech, a right given to all, and the license for own Pro-Israel advocacy.

My surprise wasn’t with our own people criticizing of our efforts, after all, in this week’s Torah portion God Himself calls us a “Stiff necked people.” My disappointment came from the fundamental misunderstanding of the right to free speech. Free speech doesn’t allow the voicing of any and every opinion. Although simple common sense would dictate these statements, the United State Supreme Court has long ago felt it necessary to state that, “Those words which by their very utterance inflict injury are no essential part of any exposition of ideas. False or malicious defamation of racial and religious groups are punishable by law.”

No greater perversion of free speech could be envisioned than allowing it to be used to hurt others. The right of free speech is given to allow injustices to be stopped, not abuses to be carried out. In demanding that libelous charges against Israel be taken down, we were protecting free speech, not hindering it.

As a community we must be careful that our concern for human rights and abuse doesn’t extend so far that we allow ourselves to be injured by our own efforts. In our efforts to be fair, we must recognize when we begin to justify the wrong and evil. When we begin protecting those who wish to harm us, we must check (not stop for even evil people retain their rights) to see if we’ve begun aiding those wishing to destroy us. As Professor Walter Kotschnig famously said, “Keep your mind open—but not so open that your brains fall out.”