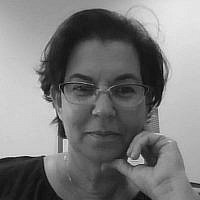 The Blogs
Niva Kaspi
Apply for a Blog
Please note that the posts on The Blogs are contributed by third parties. The opinions, facts and any media content in them are presented solely by the authors, and neither The Times of Israel nor its partners assume any responsibility for them. Please contact us in case of abuse. In case of abuse,
Report this post.

The most positive thing about Breaking Bread, well, besides the Pollyanna-esque tone of the entire film, is that it propelled me to go from the cinema directly to the greengrocers and buy a bunch of fresh parsley. Parsley is the kind of ingredient that signals serious intentions without being overly explicit about it. Unlike its more extravagant friend, the hummus, who is the official Middle East Ambassador to the Western World, the parsley is barely noticeable yet at the same time meaningful in its own humble way.

Breaking Bread is of the pre-packaged hummus variety. This film presents us with a Vogue Living, ethno-chic version of Haifa, Akko, and The Conflict which is significantly removed from reality, but instead of being escapist it smacks you straight in the face with the audacity of its glossing over.  The premise to this documentary by producer-director Beth Elise Hawk is to showcase the A-Sham Arab food festival that runs in Haifa over 3 days, where Arab chefs are paired with Jewish ones to cook and serve scrumptious dishes based on traditional ones. Pause. Rather than ‘showcase’ the movie ‘enlists’ a food festival for its own agenda which – one must suspect – is either questionable or extremely naïve. The plot mostly consists of ragged, tattooed, tobacco-hazed chefs talking outside quaint restaurants nestled within oriental alleyways, intercepted by slow motion insta-shots of the tossing of salads, the stirring of pots, and the sprinkling of pomegranate seeds.

Both the Jewish and Arab chefs talk about wanting to cook and eat in harmony with each other and condemn extremism on both sides.  A balanced symmetry? Tick. Except, there is a herd of elephants that the film manages to almost entirely be oblivious to. Gaza, it seems, will not be attending the festival due to some misfortune we’d rather not go into right now. Haifa, it transpires, is a city without a past or, at best, with a past that it should now be ready to move on from. Even the fact that the film seems to celebrate the first Arab winner of Israel’s Master Chef is rather depressing. For 2021. And I’m not even going to question the role of Jewish chefs in an Arab food festival. There is such a role, of course, but then we need to open the Sephardi/Ashkenazi Pandora box. Thus, with every reiteration of the ‘we just want to cook and eat together’ mantra, my seat became increasingly uncomfortable. With every closeup of (too moist) chickpeas, I was finding it more difficult to suppress my moans of frustration.

It is true that some viewers (perhaps even me, after a particularly large glass of Prosecco) would rejoice at any display of unity and reconciliation they are served, no matter how crafted or fleeting. The affinity and warmth between the Jewish and Arab chefs seemed genuine, their wishes sincere and oh so simple. Nevertheless, in the absence of a large Prosecco, I did feel sad for my non-Israeli friend who had her pleasant 84 minutes erased by the post-viewing grumblings of this Israeli expat.

The problem here is that a one-dimensional message of coexistence seemed to have completely dominated a film about food – about great food! — and in doing so, missed an opportunity to become a more layered, sensuous and compelling work. Which leads to my biggest qualm with the film: its failure to do justice to the food. We were only allowed glimpses of incredible recipes, some of which have become nearly extinct, of the childhood memories that accompanied them, and of the paired chefs in the kitchen working the pots together. I was also amazed to discover that chickpeas – like my face – don’t look that great in closeup. Their slightly wrinkled, tanned and earthy features (the chickpeas, not my face) appeared on the big screen pale, soft and sweaty.  No, the food was but a pretext for the message that kept repeating itself in a way which seemed suspiciously like an advertisement to promote Aliyah.

Finally, there’s the film’s inopportune timing. I can imagine an idea being pitched about a festival symbolizing harmonious Jewish-Arab relationships in Israel. A little early for that. How tragic for the film’s release to coincide with clashes between Jews and Arabs in the ‘mixed cities’ of the very kind featured in the film. Although, as we say in Australia, Blind Freddy could have told you that celebrating anything of this kind in Israel is tempting fate. If the film had liberated itself from its own per-conceived narrative and got its apron stained by the bubbles, splashes, and sizzles of these kitchen encounters, it would have likely ended up with a more credible depiction of coexistence.

About the Author
Niva Kaspi holds a PhD from the University of Western Australia, with a research interest in linguistic and cultural untranslatables. She lectures in Media and Culture at Edith Cowan College, and freelances as a Hebrew to English literary translator, specializing in 'rhyme spinning' for both adults and children.
Related Topics
Related Posts
Comments
Advertisement