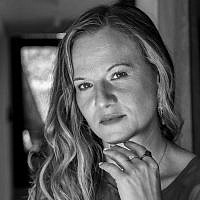 The Blogs
Ilana Kwartin
Apply for a Blog
Please note that the posts on The Blogs are contributed by third parties. The opinions, facts and any media content in them are presented solely by the authors, and neither The Times of Israel nor its partners assume any responsibility for them. Please contact us in case of abuse. In case of abuse,
Report this post.

As a child, I was a competitive gymnast, beginning in rhythmic gymnastics, but quickly moving to floor gymnastics. I trained several times a week with my team and participated in competitions across Israel. When I was 13 years old, my trainer took me aside and told me that due to the build of my body, my height and expected weight, I will not achieve greatness and will not be fit for international competition.

I remember the burning sensation of defeat as tears welled in my eyes and my dreams were cut down before me, but I believed my trainer and took her recommendation. I then proceeded to study at the trainers’ program at the Wingate Institute.

Thanks to this turn of events in my life, I was fortunate to earn a profession at a relatively young age, running gymnastics classes across Jerusalem, and later on, as a gymnastics specialist at summer camps in the United States. I injured myself demonstrating an aerial (hands-free cartwheel) one summer at camp, but there I also met my future husband. Sometimes, the sharpest turns in our lives, while devastating at the moment, turn out to be a change for the better.

I was born in the Soviet Union and raised in a family in which the Soviet ethos was always present, even if not always conscious or overt. The striving for excellence, the aspiration to greatness, the crazy work ethic, the competitive spirit, the drive to succeed and to win and the push through difficulty were part of my upbringing. Even though I grew up in Israel from the age of six, it was hard to mistake the ground upon which I was nurtured, matured and conditioned to achieve my dreams.

From my current residence in Los Angeles as an emissary for the Jewish Agency for Israel, I stayed awake until three in the morning to watch Linoy Ashram win a gold medal in the All-Around Rhythmic Gymnastics competition and tears of happiness and nostalgia ran down my cheeks. Linoy did the unbelievable and won, not only over the Averina twins, who had controlled the sport up to that very moment, but over an entire country. She defeated not only the Russian athletes, but the entire Soviet ethos.

When I think about the history Linoy made before my eyes, my thoughts return again and again to the twins, Dina and Arina Averina. Arina performed first with each apparatus and Dina last, the order preserved through all four rotations. One twin opening each round of competition and the other closing. The individual rankings jumped with each performance and we all held our breath for Linoy, Nicol Zelikman and Israel, but also a little bit for the Averina twins. In each rotation, we witnessed an amazing opening performance by Arina that kept her in first place as the competition continued. Then, after Linoy performed in the eighth position and Dina in tenth, Arina would inevitably drop to third place. This repeated until the fourth and final rotation and here it seemed that Arina came to grips with the reality of her ranking, or at least that is what I read on her face.

Again and again, after her final rotation I see Dina before my eyes, holding her stuffed animal as she waits the eternity for the judges’ scores. I see her in this most private moment, when all she must want is to be alone, but is denied that privilege. She suffers through an unbearable emotional wave in front of hundreds of millions of viewers across the world. I see her twin sister standing, holding a stuffed animal as well, to give herself strength. Averina stands far from her twin, giving Dina the space to sink into her own sadness as the screen shows how her heart is about to break. 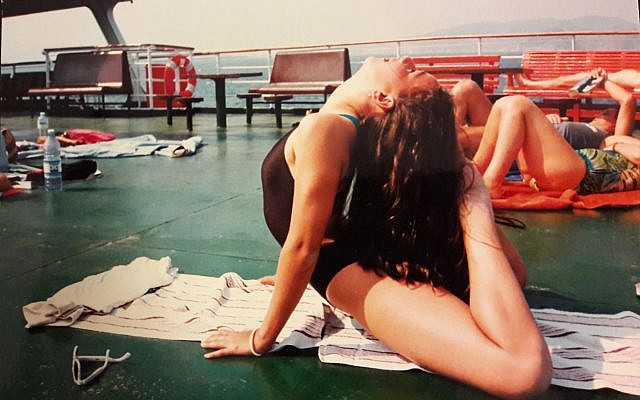 The stuffed animals the sisters held are a testament to their lost childhood. Hours, days, months and years of training, instead of playing with friends and spending time with family. They are 22 years old and the purpose of their lives is singular: to be the best rhythmic gymnasts in the world, bar none. The most incredible, surprising and complex layer of this story is their shared sisterhood as identical twins.

We all know about sibling rivalry and the sometimes explicit comparisons parents make between their children, but to train alongside your identical twin, from morning to night; to compete together, and against each other at global competitions, including the Olympics, each with her own coach and trainer – this is an altogether different world of difficulty, of chronic emotional stress and living on the edge of sanity. They share the same genetics and natural talent and are both leaders in competitive rhythm gymnastics, including in past Olympics, and I desperately hope they both desire victory so much that it justifies all the sacrifice inherent at this level of competition.

Despite all the similarity, there is still a difference between the two Averina sisters: Arina, who competed first in the final ribbon rotation, sat and waited a nerve-wracking eternity just to see if she would win a medal. After Linoy performed in the eighth position and another competitor in the ninth, it was clear to her that the dream of a medal was dashed and that she would reach “only” fourth place. However, fourth place is not defeat – fourth place is the point from which she begins her training for the next Olympics.

Now all eyes were raised to Dina – Arina herself, Israel, the rest of the world and especially Russia – for the final and determining performance. When the score appeared after a nail-biting delay and she was ranked second, Dina broke down. Her break was sharp, painful, empathy-provoking…and in front of the entire world.

Running through her head were the many years that she dedicated to this very moment, including the two difficult years of the pandemic in which she trained daily. She contemplated and imagined the cold welcome awaiting her when she returns home to Russia – the uncompromising, unforgiving culture where losing is not an option and that extends no pity if you fail. And second place is failure.

Second place stains the one who lost by a fraction of a point and Dina knows it. She knows her society will rake her over the coals. She knows she disappointed a country that holds victory in athletics as a central ethos and has never faced serious challenge in the field of rhythmic gymnastics before. Never, until this very moment.

Dina is broken and crushed, she feels the injustice and wrong that she believes was done to her and is unable to see anything else, not even the modest and sportsman-like gesture of Linoy extending a hand. She is alone and she is imprisoned in the chains of a country that is raising generations in this manner, a country that wins competitions and reaches great achievements, but in which the individual is solely a tool in service of a greater cause. Dina feels that she, personally, failed that greater cause and she cannot look herself in the mirror.

Those images, from one of the most suspenseful and thrilling gymnastics competitions ever witnessed, together with the story of the identical 22-year-old twins, with their big, wondering eyes, will remain forever a piece of the story of Linoy Ashram and her gold medal. Linoy, who shook the ethos of one of the greatest empires in the world.

About the Author
Dr. Ilana Kwartin is the Regional Director, Western US, for the Jewish Agency for Israel. Before moving to Los Angeles with her family, Ilana was VP at Eretz-Ir. Ilana lectures on Law and Gender and on Social Entrepreneurship. She holds B.A. degrees in Law and Psychology from the Hebrew University and an M.A. in Conflict Resolution from the Ben Gurion University. Ilana has a Ph.D. in Gender Studies from Bar-Ilan University. Ilana is the author of "Imprisoned: Women in Extreme Controlling Relationships" which explores a hidden phenomenon and is based on her Ph.D. research. Ilana is married to BG, and mother of Tamara, Yoav, Ivri and Arava.
Comments