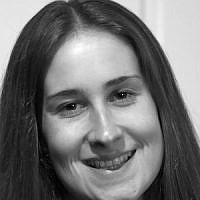 The Blogs
Yakira Cohen
Apply for a Blog
Please note that the posts on The Blogs are contributed by third parties. The opinions, facts and any media content in them are presented solely by the authors, and neither The Times of Israel nor its partners assume any responsibility for them. Please contact us in case of abuse. In case of abuse,
Report this post.

Once its shrill cry jumpstarts the battlefield, sneakers from opposing sides pound the floor of the arena as they race to the patiently waiting balls in the middle. The winners arrive first and immediately hurl the balls at the losers. From then on, it’s utter madness. Bodies sailing through the air, balls often crashing into them, and not a shred of mercy. Each play is a rapid fluctuation between attacking the target and being the target. Peg or be pegged. Kill or die. Sometimes…even both at once. This is the game of dodgeball.

If you walked into the Kedma dodgeball competition on the Saturday night preceding Spring break, you would have witnessed none of that. After much confusion about who was playing who and when who was starting when and what balls they were starting with, a whistle did commence the game. That is, if it could be heard it over the chatter. Suddenly, hunger for the much anticipated Ben Yehuda’s pizza delivery transformed into a hunger for victory, and the Jewish community propelled themselves across the floor of the old gym. Somehow, someone reached the center first and commenced the whole shebang. From then on, it was utter chaos. Foam balls flying everywhere, often incidentally between players of the same team, with nothing but luck determining who remains standing. Each play is a rapid fluctuation of your social status. Bring the glory or be the loser. Out, or if you’re lucky, just head safety.

In the minds of every Kedma dodgeball participant the two dodgeball events are one and the same.

That is the beauty of Shtick.

If you attended Jewish day school, you were probably told on day one of preschool that on day one of creation, God created light and darkness. If you continued Jewish day school it probably wasn’t long until you found out about Shtick. What Morahs Sarah, Rivka Rachel, and Leah neglected to mention was that God created a third hue that first day. In addition to light and darkness, humor – the shade of gray that blurs the line between reality and utter ridiculousness – was created too. God dubbed this grayness “Shtick” and obligated Jews to safeguard it throughout history. Moshe carried not just the oral and written torahs in his head, but the torah of humor in his Shtick. Back then, Moshe used his Shtick split the sea and guide Jews through the desert. Today, as Jews penetrate secular society, it penetrates secular humor through Bar Mitzvah Shkits on SNL.

Pictured: Moshe and his Shtick, saving the Jews from the Egyptians.

For proof of its success, look no further than the previous sentence. It’s a mass medium ingrained in our culture perhaps more unifying than Jewish geography itself. Even if that Jewish geography is played between two residents of the New York area.

As Jews, at times, we’ve had nothing. So we created something. The humor that is based on the pure stupidity of reality. Something from nothing and nothing from something. Through all our years of persecution, it was Shtick that kept us going. In times of light and in times of darkness, we can use and create Shtick to cope and expand. Sometimes the light at the end of the tunnel is gray.

The phenomenon is inexplicable to those outside the Jewish community. The best description I have ever heard others use to mirror such jokes is “just for franks.” These others also call Hebrew National franks kosher. Or maybe Frank was my camp friend’s cousin’s best friend from the Five Towns. This is just no longer quality Shtick so I will move on.

I’ve seen Shtick all over in my repertoire of Jewish high school, Jewish sleepaway camp, and Jewish seminary, but at college, it hits new heights. From “tall person only” meals to dancing across the three mile campus on Simchat Torah to color war at a Friday night dinner, Shtick is limitless…because by its very nature it is outside reality.

Yes, sometimes we feel like we’re missing out. It’s why much of Jewish college life tends to involve recreations of what is popular among secular college life. Frat parties are mimicked through our own parties in Jewish apartments. We organize our own tailgates to the Saturday football games. And most recently, the implementation of a “Kegma Beer Pong Tournament” created a space to partake in a standard college alcohol infested weekend. But the annual Kedma Dodgeball Tournament is a testament to fulfilling our obligations to all the generations of Jews who carried Shtick throughout history. A few college students tasked with participating in a dodgeball competition should have been, at best, lame. But through the power of Shtick, recreation can have a healthy originality. In fact, it was the greatest Saturday night I have experienced since coming here.

So as I huddled with my teammates for a pump up speech, I got in the zone. We were decked in all black uniforms, sports headbands, and matching stripes smeared across our cheeks. Seven Nation Army played on our weak, portable speakers, which were so quiet it may as well have just been a mysterious shticking noise. It didn’t matter that we were eight girls up against a team of eight boys in some vicious looking onesies. From the sound of the first whistle, from nothing, we created an energy so real that it was tangible. That is what Shtick is about. And that is beautiful.

So next time you question your friends’ motives, and ask them the age old question: shtick or shtark? There is no nafka mina. They are the same.

About the Author
Yakira Cohen is a twenty-two-year-old Modern Orthodox Jew. She is an SAR High School graduate (2016), Midreshet Lindenbaum alum (2017), and is a junior studying journalism and psychology at the University of Maryland.
Related Topics
Related Posts
Yakira Cohen
Comments