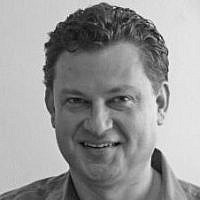 The Blogs
Abraham Katsman
Apply for a Blog
Advertisement
Please note that the posts on The Blogs are contributed by third parties. The opinions, facts and any media content in them are presented solely by the authors, and neither The Times of Israel nor its partners assume any responsibility for them. Please contact us in case of abuse. In case of abuse,
Report this post.

I’m pre-writing my post-election analysis—the same points you’ll be reading from those cowardly pundits who wait until AFTER the election to share their wisdom and analysis.  Boring!

To quote Bob Dylan, “You don’t need to be a weatherman to know which way the wind blows.”  In fact, you often know more about the weather by poking your head out the window than does some meteorologist with reams of data.

So, with lots of expert pollsters and analysts showing how tight the election battle will be for the Senate and various governorships, every commonsense indicator (Okay, plus some useful poll results and educated guessing) points not just to a Republican victory, but a blowout.  A Republican tsunami.  A surging Red Tide.  (Though, where I come from, Red Tide is toxic and makes the local shellfish poisonous).  More about those commonsense factors below.  But first…

The most interesting analyses regard how badly Democrats will handle a colossal loss.  Expect wild complaints of cheating and voter suppression, perhaps accompanied by spontaneous (yet, somehow, well-prepared) “mostly peaceful” demonstrations by Democrats and their activist (and riotous) allies, particularly if control of the Senate hangs in the balance.  Don’t be surprised if the Justice Department intervenes with legal challenges to Republican wins including, e.g., allegations that Republicans spread “misinformation.”

But assuming the margin of victory is too great to be surmounted by legal challenges and implied threats of violence, the Democrats’ internal blame-fest will begin.  What starts with finger-pointing will quickly escalate to the political drawing of long knives.  (No guns, of course—these are Democrats, after all.)  Get your popcorn ready.

The Democrats’ various factions will vociferously blame each other for the loss.  The super-woke will blame the only-moderately-woke, and vice-versa.  The hard left “Justice Democrats” and (relative) moderates will go at each other.  The old guard—really old, and really white–including President Biden (turning 80 this month), Nancy Pelosi (82), Steny Hoyer (83) and Chuck Schumer (just 71!), will have giant targets on their aged backs.

In fact, expect to see calls for President Biden to step down.  He’s already served the Democrats’ purpose by getting elected as a relatively benign figurehead of a Corbyn-ized party.  But of what use is he now?  People long ago stopped paying serious attention to anything he says, other than to watch which foot he puts in his mouth and which statements his staff must walk back. Even President Obama reportedly said in 2020, “Don’t Underestimate Joe’s Ability to F*** Things Up”—and Biden has had two more years of mental decline since then.  He is now an unfunny joke, an albatross around the Democrats’ collective neck.

Cutting Biden loose will allow the party to pin on him everything truly awful that has happened for the past two years, and then claim a clean slate for the new leadership. VP Kamala Harris may be the least-qualified and most substance-free VP in US history, but she is at least untainted by the corruption scandals encircling Biden and his family, especially their influence-peddling financial windfalls from the Chinese Communist Party and Russian oligarchs.  Newly formed Republican Congressional committees will soon start asking some very uncomfortable questions; leading Democrats can either circle the wagons and take a beating, or encourage him to step down now with honor and ceremony.  Guess which they will choose?  (Should that be their choice, I doubt Biden will put up much resistance.)

Also, watch the early jockeying for the 2024 election.  With such a thin Democratic bench of serious candidates, a crowded field of inexperienced hopefuls and delusional nonentities enthralled with themselves will scramble to stand out early–like, early Wednesday morning.  My non-weatherman Wednesday forecast: expect heavy grandstanding throughout the year.

OK, it is fair to ask: how am I so certain in the first place of a Democratic collapse?  Oh, let me count the ways…

The skewed polls.  Sure, the polls show lots of toss-ups. But time and again, we see the right-wing vote outperforming the polling, particularly when expressing support for the right wing is deemed, by overwhelmingly left-wing media arbiters, to be contemptible and worthy of mockery.  The “basket of deplorables,” as Hillary Clinton dubbed all Trump supporters, may not be eager to share their wrong-think opinions with pollsters; the polls thus under-count them.  If even one Republican voter in 100 is not forthcoming when surveyed, those toss-ups move to the Republican victory column.  If that number is one in 50, even seats which were deemed leaning-Democrat should be moved into the toss-up column.  If one in 20, the Republicans will run the table, winning every competitive race.  Consider the 2016 and 2020 presidential elections, both of which had polls mis-predicting comfortable Democratic wins.  Election night always brings surprises, but these will mostly be surprise Republican victories.  (I should note that this polling effect is strongest in national elections, moderately strong in statewide Senate and gubernatorial races, but less pronounced in more localized/Congressional elections.)

The Democratic campaigns are about nothing.  The Democrats have controlled all levers of federal power for two years.  Is there anything in their record they are proud to run on?  Sorry, but abortion absolutism, January 6 hearings, paranoia about the continued existence of Donald Trump, and hysterical talk about how the Republicans will “end democracy” will not sway any voter not already committed to voting Democrat.  Serious policy proposals are few and far between; what solutions to national problems are Democrats even promoting?  Windmills and solar panels?  So, voting Democrat is essentially voting for more of the same.  And with an incredible 68% of Americans considering the country to be on the “wrong track” (26% say “right track” – but let me know if you can find any of them), “more of the same” is not going to win close races.

Less election interference.  I am not suggesting that the 2020 election was “stolen.”  But there were plenty of shenanigans in changing voting rules to the Democrats’ advantage—several in spite of violating state or federal laws.  And Democrats’ social media manipulation of news was rampant; for example, both Facebook and Twitter largely squelched the bombshell Hunter Biden laptop story (with Twitter even blocking the New York Post (which broke the story) and anyone who linked to it).  Now, court decisions and state legislatures have (hopefully) restored more election integrity; and Elon Musk is running a less-censorious Twitter.

“More of the same” is NOT what anyone is voting for.  The Biden administration, and Democrat-controlled jurisdictions, have either encouraged the following problems to develop or done nothing meaningful to stop them.  They have unilaterally refused to enforce existing laws of their choosing, in violation of their oaths of office.  Here are the first 16 examples I thought of:

Here is the bottom line: in 2020, most Democratic policies were still hypothetical, and the Congressional/Senate vote was still divided 50/50; America has now lived under the reality of sharp decline for two years.  Outside the left-leaning media bubble, the New York-DC corridor, college campuses and California, Americans just aren’t on board with the above list, and are poorer and more divided.  What persuadable swing voters will choose more of this?

Of course, there might yet be some wild-card factor that renders my analysis less-than-perfect.  Therefore, I reserve the right to retract everything above.

But I don’t think I’ll have to.

Remember, you read it here first!

About the Author
Abe Katsman, a Seattle native, is an American attorney, consultant, political commentator and writer living in Israel. He serves as Counsel to Republicans Overseas Israel.