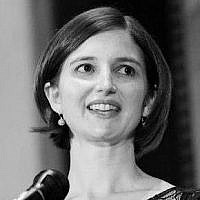 The Blogs
Carrie Bornstein
Apply for a Blog
Advertisement
Please note that the posts on The Blogs are contributed by third parties. The opinions, facts and any media content in them are presented solely by the authors, and neither The Times of Israel nor its partners assume any responsibility for them. Please contact us in case of abuse. In case of abuse,
Report this post.

When the news broke about Rabbi Barry Freundel allegedly spying on women as they prepared for the mikveh, I thought about women around the world and their particular need for safety that night. At the same time, a woman visited Mayyim Hayyim Living Waters Community Mikveh and Education Center in Newton, MA, where I am the Executive Director, for the first time. She had been a regular user at the Kesher Israel mikveh and our Mikveh Guide recounted that when she arrived she looked ashen and could hardly speak about what happened. She said she wasn’t sure she’d be able to come that night because she was so shaken.

Since that time, I have heard outrage and sadness about the Kesher Israel community needing to pick up the pieces and build a sense of trust again. I’ve heard Barry Freundel called a pervert who couldn’t control his impulses, preying on vulnerable women in his own community.

True, yes. But if our collective reading of this story ends here we will have fallen remarkably short. We will be mistaken if we believe such a crime could never happen in our backyards. We might think, ‘But my rabbi is beloved’… ‘My rabbi is widely respected’… ‘I trust my rabbi’…

It’s time we face the facts: what happened with Barry Freundel is no isolated issue. Every person – man or woman – everyone who has a mikveh in their community should be asking themselves the same thing: “Could this, or other forms of abuse, happen in my community?”

This particular scandal is just the latest incident of mikveh users being subject to others’ abuse of power and authority over the years. Stories of intrusive mikveh ladies performing unwanted scrubbing and humiliating inspections, or turning visitors away entirely are all too common. Physical space in such disrepair that you wouldn’t want to take off your shoes, much less your clothing. Male rabbis who require female converts to immerse in their presence despite “only being able to see the tops of their heads.”

Far too often, Orthodox mikva’ot are one-man shows. This ritual, requiring nudity, is, per community custom, quiet and secretive. Behind closed doors, the rabbi in charge calls the shots on how the mikveh is used, when, and by whom. He dictates who is an acceptable attendant and who is not. He is the man with ultimate power in the community, who has the final say on matters of personal status regarding conversion, marriage, and physical intimacy between couples. Without significant changes to this system, such abuses can and will happen again.

My fear is that in trying to allay mikveh-goers’ concerns, well-meaning leaders will tighten the reins of control even further, and I’m already seeing these conversations getting started. I fear that security cameras will be installed at entryways, gatekeepers will become nastier, the men we once trusted to test water levels will be looked at with a suspicious eye. And while an added layer of care may well be warranted, we’ll be missing the real issue entirely.

What we need is a mentality shift, not a security upgrade. Fundamentally, we need to open up the mikveh, not isolate it further. Maintaining safety means taking the mikveh out of the hands of the powerful few and drastically opening it up to the many. These are true safeguards that allow for transparency in leadership and safety for its visitors.

Who is in charge of Mayyim Hayyim? Am I, as Executive Director?

As an independent 501(c)3 organization, we have our own board of directors. Are they in charge? We also have a Rav HaMachshir – a supervising rabbi who ensures that the collection and immersion pools themselves are kosher. We have a Clergy Advisory Committee who determines policies around usage when there are questions. We have a Mikveh and Education Director and 160 volunteer Mikveh Guides who we’ve trained to facilitate immersions with respect, dignity, and modesty. Clergy who facilitate conversions do so on their own terms, each determining their individual standards and policies for their candidates.

Who is in charge? We all are.

This may not be the exact structure needed for all mikva’ot. But when we incorporated in 2001, our founders were acutely aware of the power issues at play elsewhere. They recognized the need for multiple stakeholders to own pieces of the greater whole, and created a system with checks and balances in place.

Women’s voices and leadership are central to our existence, not some afterthought of a committee whose primary purpose is to choose shower curtains and paint colors.

As a true community mikveh, our leadership each has its own specific responsibilities. As executive director I report to the board and keep an eye toward financial sustainability and our growth as an organization. Our board sets policies and the staff implements such policies. The Rav HaMachshir makes sure the pools are kosher and has nothing to do with how the mikveh is used. Our volunteers are diverse and they are chosen not by one rabbi but rather by a team of psychologists, social workers, and other community leaders. They’re chosen for their sensitivity, care, and good sense of boundaries, because the role of Mikveh Guide is not appropriate for just anyone and is about much more than simply a knowledge of which barriers invalidate an immersion.

In a ritual that is performed predominantly by women, the concept of entirely male leadership should be completely foreign. Institutions such as Yeshivat Maharat and Nishmat are training women who are exceedingly learned in the laws surrounding mikva’ot and we need not rely on men to fulfill this role. And if we don’t have enough women for these roles? Let’s train more of them.

This combination of diffuse leadership into the hands of many, including women, is what will ultimately allow power and ownership to live where it should: in the hands of the individuals using the mikveh themselves.

The Mayyim Hayyim Mikveh Guide took care of our visitor from DC the way she would have taken care of anyone: she took her cues from the guest, being present when needed and giving space when her gut told her to. Before she left our visitor went on, effusive about her positive experience and expressing overwhelming gratitude for Mayyim Hayyim being in her life at this particular moment. This is what our structure allows for every day, and it will be critically needed in what promises to be a very long process of repairing the damage of this situation, in many more communities than just Washington, DC.

May our takeaway of all this be the recognition that a stronghold on mikveh benefits its leaders, not the wider population. If we open this ritual up, we will find that the mikveh can be a safe place of deep spiritual meaning and transformation. It’s what we’ve found in Boston, and it’s what we’re helping other communities around the globe to accomplish. May the situation in Washington, DC be a wakeup call to truly take ownership of what should be the safest place possible in our community.

About the Author
Carrie Bermant Bornstein is the Executive Director of Mayyim Hayyim Living Waters Community Mikveh and Paula Brody & Family Education Center in Newton, MA. In 2013 Combined Jewish Philanthropies named Carrie one of the 18 most influential young adults in Boston.
Comments