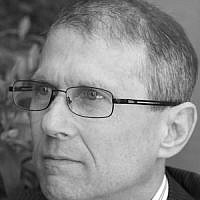 The Blogs
Ted Lapkin
Apply for a Blog
Please note that the posts on The Blogs are contributed by third parties. The opinions, facts and any media content in them are presented solely by the authors, and neither The Times of Israel nor its partners assume any responsibility for them. Please contact us in case of abuse. In case of abuse,
Report this post.

Breaking the Silence (BtS), a Tel Aviv-based NGO, is shouting from the rooftops with a new report on purported war crimes committed by the Israel Defense Forces during last year’s conflict in Gaza. This report catalogues testimony from 111 Israeli soldiers about the immoral and illegal acts purportedly committed during the seven weeks of Operation Protective Edge.

I say ‘claims’ because BtS insists on keeping its sources anonymous, a policy that relegates this document to the questionable status of faceless men making untested and unverified allegations.

Such methodology would be highly dubious even if the report’s authors were above all suspicion of partisan bias. But this cannot be said of BtS, which was described by the left-of-centre Israeli newspaper Ha’aretz as an organization that: “has a clear political agenda and can no longer be classed as a ‘human rights organization.’”

Thus for reasons of ideology and methodology alike, the veracity of these allegations must be called into serious question. Yet in a manner surely unintended by its authors , the BtS report actually ends up providing backhanded endorsement of the IDF’s battlefield ethics.

In fact, many of the report’s narratives describe the lengths to which the Israeli army went in its attempt to avoid civilian casualties amidst the violent chaos of urban combat. As BtS concedes in its executive summary: “many soldiers spoke of a working assumption that Palestinian residents had abandoned the neighborhoods they entered due to the IDF’s warnings.”

This desire to spare non-combatants was also clear in the testimony of BtS source no 41: “There was a field interrogator – usually a reservist who speaks Arabic – who comes around with an electric megaphone and shouts really loudly that if anyone is in the house they should come out. They were about to launch the rocket and then *** yelled, ‘Don’t shoot’ because he could hear people inside the house, he saved an entire family. They found this family in one of the houses and moved them to another house, a two-minute walk from there.”

The IDF operational procedures described in the BtS report are considerably more rigorous than the minimal requirements imposed by the law of armed conflict. They reflect a standard of battlefield practice on par with that employed by Coalition forces in Afghanistan.

Yet Israel’s efforts to avoid collateral casualties are made much more difficult by the immoral lawlessness of its foe. Like Aussie diggers and US Marines fighting the Japanese during WWII, the IDF faces enemies that routinely and intentionally spurn the law of armed conflict.

In a letter to the Security Council on 27 April 2015, UN Secretary General Ban Ki Moon wrote: “I am dismayed that Palestinian militant groups would put United Nations schools at risk by using them to hide their arms…and, in two cases, probably to fire from”. Palestinian militias have also been caught on camera using Red Crescent ambulances to transport gunmen and weapons around the battlefield.

In the lexicon of the Red Cross, these incidents constitute the war crime of perfidy, an act of battlefield treachery that includes using civilian facilities for military purposes or firing while bearing the white flag of surrender.

By deliberately blurring the all-important principle of distinction between combatants and non-combatants, this perfidious Hamas strategy places Palestinian civilians at much greater jeopardy. The ensuing downwards spiral is perfectly portrayed in the testimony of BtS source no. 13, who described how one elderly Palestinian: “70 or 80 years old, turned out to be booby-trapped from head to toe. From that moment on the protocol was very, very clear: shoot toward the feet. And if they don’t go away, shoot to kill.”

This Palestinian practice of using their own civilians as sacrificial battlefield pawns reflects a calculus in which cynicism is only surpassed by media savvy. And an essential part of that strategy relies on active collaboration by hard-left Israeli activists whose raison d’etre revolves around the pathological denigration of their own country.

One of the finest attributes of Israel’s robust democracy is its fiercely independent judiciary. The IDF’s Military Advocate General has shown no hesitation about prosecuting soldiers and officers whose actions may have violated army regulations and the law of war.

US Civil War General William T Sherman famously observed that “war is all hell.” But even the inferno of armed conflict has rules designed to constrain its essential brutality. In my military judgement there are three narratives out of 111 in the BtS report that might warrant a probe by the IDF Military Police Criminal Investigative Unit.

I would urge these Israeli servicemen to convey all allegations to competent judicial authorities rather than feed the agenda-driven anti-Zionist propaganda campaign of a far-left NGO.

About the Author
Ted Lapkin is the Director of Public Affairs & Advocacy for the Zionist Federation of Australia and a former Israeli combat-intelligence officer.
Comments