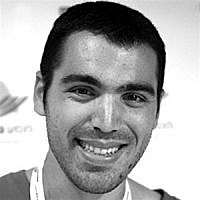 The Blogs
Daniel Hammerman
Apply for a Blog
Please note that the posts on The Blogs are contributed by third parties. The opinions, facts and any media content in them are presented solely by the authors, and neither The Times of Israel nor its partners assume any responsibility for them. Please contact us in case of abuse. In case of abuse,
Report this post.

I grew up in a community that prides itself in its diversity. During my year of volunteering in Israel, I have found that people view diversity very differently. In Lod, unlike in Stamford, it is not largely encouraged to spend time in places with individuals from different backgrounds. Though Lod is considered a mixed city and there are public spaces like the outdoor market or the mall where Jews and Arabs can coexist, I hardly saw social, non-business related interactions between Jews and Arabs during my entire time living there.

In fact, from what I observed from the children I worked with, it seemed that such interactions were strongly discouraged and seen as dangerous. I distinctly remember the reaction I received from the little Ethiopian Jewish girls I taught music to at a community center once a week, after I told them I worked at an Arab school. They were completely in shock that I would interact with Arabs, even though there are many Arab kids who attend that same community center. One girl even went so far to say that the Arabs want to kill all Jews and they should leave the Jewish state and make their own state, because it is too dangerous to be around them.

I will also not forget a conversation I had with my 5th grade students at Elrazi, an Arab primary school I taught English at three times a week. It was Yom Hazikaron, Israel’s Memorial Day, and during the school day we heard the nationwide siren to commemorate Israel’s fallen soldiers and terror victims. I wanted to know how Arabs felt about this day, and I thought I could have an enlightening conversation with these kids, who were at very high levels in English. In a surprising response, one of my favorite students said to me that he hates soldiers, he hates Israel, and he hates Jews. I then asked him if he hated me because I am Jewish, and he said that I am good but the rest of the Jews are bad.

I was definitely shocked by these responses, but at the same time this was one of the main reasons why I decided to work in Lod. After studying the Israeli-Palestinian conflict in college and starting to learn about Palestinian perspectives on the major issues, I wanted to enhance my understanding of the conflict and contribute to efforts on the ground to advance conflict resolution. To me, the best way of doing this was to immerse myself in a Palestinian community and get to see life through their eyes. This is why, when I first learned about Lod and Yahel’s yearlong volunteer program there, I was instantly glued to this opportunity. I knew that I wanted my next work experience to involve intimate work with Arabs and a chance to promote coexistence between Arabs and Jews, and I was confident that living in Lod would help me accomplish both of these goals.

This is also why when it came time to choose volunteer placements, there was no question that I would be working at an Arab school. From the first moment I walked into the building, I had a feeling the Elrazi school would be one of my most meaningful placements, and I was so right. The entire staff immediately welcomed me and Jodie, the other Yahel volunteer placed there, and the kids were so happy to have us. In all of the lessons I managed, my kids were very enthusiastic about playing with me and showing me their ability (albeit sometimes limited) to speak, read, and write in English. My kids knew I was Jewish, which was sometimes confusing for them, but ultimately that was not important. My kids were able to see that, Jewish or not Jewish, I was there to help them learn English in the most fun and productive way, and I was someone they could easily relate to and enjoy being around.

However, my position as a Jew working at an Arab school did not come without its challenges. In fact, there were moments that scared and tested me unlike anything else I have ever experienced. At the time I started working at Elrazi, the “stabbing intifada” was becoming more and more prominent. Day after day, I would hear on the news about multiple stabbing attacks by Arabs in the West Bank and Jerusalem, and even in more central cities like Jaffa, Tel Aviv, Beer Sheva, and Rishon L’Zion. Even though the entire country was on edge, I was confident that I had no reason to feel at risk at Elrazi. I felt that my school was a sanctuary, a place where everyone was committed to nonviolence and where the national wave of violence could not penetrate.

All of these thoughts were put into question one day when I had a startling interaction with one of my kids. I was walking down the stairs with some of my students, and I saw that they were playing with plastic knives. Suddenly, one of my kids placed his knife on my stomach. When this happened, I was in total shock and did not know how to respond. I knew that this kid was probably just playing with me and did not even think about the current events his action related to. However, I could not get it past my mind that he intentionally put a knife to my stomach because he thought it would be a fun game to stab a Jew. With the idea of my sanctuary being somewhat shattered, I could not help but question my decision to work at Elrazi, thinking maybe my kids were not as peaceful as they originally appeared.

Then, the principal revealed that she told the boy’s mother about what he did, and the mother denied it, saying her child was innocent and could not do something like that. When the principal told the mother about impending consequences for the kid’s violent behavior, the mother said she would complain about her to the municipality and get her fired. In response, the principal told her that she could complain to the Prime Minister if she wanted, but that was not going to change Elrazi’s zero tolerance policy toward violence. Throughout the meeting, the principal emphasized to me that she appreciated what I was doing at her school and she wanted me to feel safe there.

The immense support I received from the school’s staff in this instance showed me a side to Israeli Arabs that I had never seen before. These individuals were willing to go through tough conditions in order to defend me and make me feel secure. This occurred in other instances as well, when I was going through dilemmas and the entire school staff was prepared to unconditionally support me. In my mind, this is a great example of how kindness surpasses cultural differences, including in the Israeli-Palestinian conflict. There was no thinking about the fact that I was Jewish; the school staff saw I needed help and they had my back in the best possible ways.

I am so grateful to have had this eye-opening, life-changing experience that has given me a much more nuanced worldview and openminded perspective on life.

This is an excerpt of a speech I presented on July 8, 2016 at Temple Beth El in Stamford, CT about my yearlong experience volunteering in the mixed Israeli city of Lod on the Yahel Social Change Program. For the full transcript of the speech, please refer to the personal blog I maintained throughout my participation on the program.

About the Author
Daniel Hammerman graduated from American University with a BA in International Relations. Following his studies, Daniel volunteered for a year in the city of Lod, Israel promoting social change for Lod's Arab and Jewish residents, and interned at Seeds of Peace in its Development and Programming departments, He is now working at the Jewish Community Project (JCP) in TriBeCa as a Development and Program Associate.
Related Topics
Related Posts
Comments