The Blogs
Jonathan Russo
Apply for a Blog
Advertisement
Please note that the posts on The Blogs are contributed by third parties. The opinions, facts and any media content in them are presented solely by the authors, and neither The Times of Israel nor its partners assume any responsibility for them. Please contact us in case of abuse. In case of abuse,
Report this post. 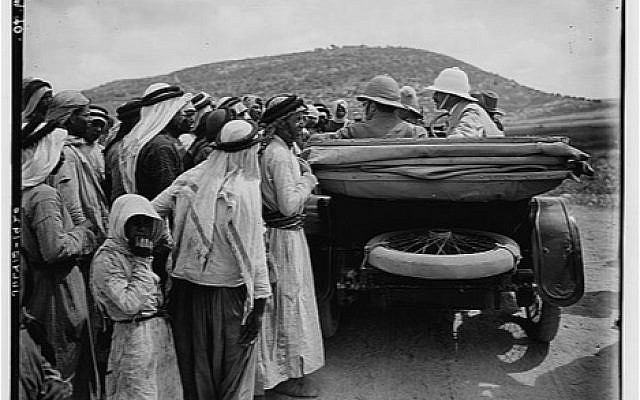 Dear Reader, please read the below with the knowledge that today, 11/30, the Israeli newspaper Haaretz has a story that the Israeli army (IDF) is warning the new government that it may not be able to control the growing unrest in the West Bank.

No reader should be naïve about the daily bloodshed in Israel. Turmoil in the Levant in general and Israel specifically is thousands of years old. Murderous conflict has been the rule not the exception. More blood has arguably been shed per square dunam of land in Israel and its surrounding countries than anywhere else. The Bible is one violent tale, ditto the Babylonian invasions, the Roman days, the Muslim centuries, the Crusades, and the Ottoman conquest. Israel’s birth in 1948 was midwifed by war and atrocities.

In an attempt to quell some of the violence between warring parties in the period before Israel’s independence, the League of Nations legitimized the British in 1927 to act as referees between Arab tribes and later the Jewish immigration and rule the country known as Palestine. Of course it didn’t stop numerous factions from slaughtering one another, but at least it may have delayed the inevitable war between the Jews and Arabs that followed for a while.

One way to look at “the occupation” of the West Bank cities and towns of Palestine is to consider it as an extension of the mandate. Of course it is by one of the warring parties, but the very nature of the occupation resembles the mandate. In that the official policy is not to absorb and rule the “territories” of West Bank but to “administer” it until it can govern itself. Thus Israel will not annex it or grant its inhabitants Israeli citizenship but occupies it waiting for “a partner for peace.”

Of course the Palestinian inhabitants deny they need this administration and see it as nothing but oppression.

The two sides of this story have been locked in, no surprise here, a murderous conflict with headlines of religious pogroms, revenge killings, knifings, shootings, car ramming’s and bombings. News headlines that could have appeared anytime in the last hundred years in Arab or Jewish papers. Even the locations are the exact same. The never-ending murders in Hebron between Jews and Arabs is so ingrained it seems like it is spawn from the very earth itself.

The two sides now seem are as far apart as ever. When I attended the funeral of a settler killed in a knife attack in Gush Etzion a few years back it was clear there was no understanding of the Palestinian side. Every speaker announced this was the price to pay for defending the land given to them by God and the politicians swore that more security would be granted, another access road paved. They promised another “illegal” settlement would be legitimized. The settlers then usually inhabit another hilltop in revenge, further exposing themselves to attacks at these remote spots. Rinse and repeat. The twin bombings in Jerusalem last week are a reminder that murder is only a day away.

The world is regularly shown the Palestinian side via cellphone footage or embedded reporters in the West Bank. Endless Palestinian grief over killed fathers, sons, and daughters is only a click away. Wounded teens with lifelong disabilities from rubber bullets or real ones emerge from hospitals and head home to join the other injured youth. Meanwhile the remnants of the Palestinian Authority continue collaborate with Israel’s security forces to keep a lid on the turmoil, least their gravy train of corruption become derailed. That would enable Hamas the so very effective rulers of Gaza either stage a coup or actually win an election. There is a reason the 88-year-old Mahamoud Abbas has not held an election since 2005.

So there you have it. The religious and nationalist hatred so brilliantly outlined in books like Tom Segev’s One Palestinian Complete the Jews and Arabs Under the British Mandate and, A Twice Promised Land by Isaiah Friedman amongst a shelf of others continues. Israel officially as of now neither wants to absorb the West Bank nor do the Palestinians want to renounce any of the land they lost in 1967 or the half that polls say want back all of 1948 Israel. Today, the Israelis just fly over West Bank cities to the Gulf states that have no trouble normalizing relations with them.

Unfortunately ignoring the Palestinians does not seem possible as the disparity between their economic progress (incomes a fraction of the Israelis) or the daily issues dealing with checkpoints, fences and blocked access to agricultural lands produces a despair that often turns to rage and then into violence.

What to do? The Israelis very understandably do not want a repeat of Gaza. Gaza could have served as the role model for a two-state solution, for an economic co-mingling of interests. It did not. Only the most blinded cannot see that once given a territory to hold the Palestinians there made the choice to martyr themselves in an attempt to… believe it or not recapture the “land between the river and the sea” ie. all of Israel. No matter how difficult no matter how costly to the lives of the Gazans they would make this happen, or at least disrupt Israeli life as much as possible to remind them that Hamas has power.

There has been an over focus on this conflict in the world’s capitals and at the UN. Per capita this conflict has both consumed and distracted the world from so many other more deadly conflicts in Africa and Asia. Be that as it may however, it can provide an opening to lessening the conflict. If the world cares so much about the Palestinians let the world revise the old British Mandate with a West Bank Mandate 2.0.

Let all those Europeans and North Americans so deeply concerned about the conflict set up a body to both economically and military impose a two-state solution. Instead of absurd UN vehicles driving around to refugee camps, continuing to foster despair, (they should have been dismantled and absorbed into Palestine and for that matter Lebanon, Jordan long ago) let UN military advisers supervise a territorial peace agreement.

Yes, this would have to be done with deep cooperation with the Israeli military and the PLO but that is exactly what a Mandate is supposed to do. To keep both sides at arm’s length and adjudicate disputes. If this was successful, the small but real forces trying for coexistence on both sides might see some day light amidst the current gloom. For sure, injecting Swedish, French and Italian troops would give the Palestinians hope that the world has not moved on from their plight. It would potentially stop the growing and global BDS movement from raining on Israel’s Hasbara and economic parade. The Mandate would also give fresh energy to the real and growing economic cooperation between Israelis and Palestinians.

There needs to be a way out for both peoples. As of now, left to their own devices I don’t see one. All I see today from where I am in Jerusalem as I write this, is violence, revenge for that violence and more violence. While the Mandate 2.0 is not going to be easy to accomplish the status quo is a dead end for both sides.

About the Author
Jonathan Russo has been observing Israel and its policies since he first visited in 1966. He is a businessman in New York City.