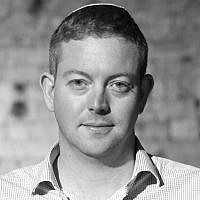 The Blogs
Hanan Rubin
Apply for a Blog
Advertisement
Please note that the posts on The Blogs are contributed by third parties. The opinions, facts and any media content in them are presented solely by the authors, and neither The Times of Israel nor its partners assume any responsibility for them. Please contact us in case of abuse. In case of abuse,
Report this post.

Everywhere in Israel has its own special time of year. At springtime, we go up north, to see the flowers in their marvelous, fleeting bloom. By winter, we head to the South, hiking and taking in the sound and sight of water rushing through the creeks of the Negev. In summer, it’s time to enjoy Tel Aviv and its beaches. But when in the year is Jerusalem’s time?

Apparently, it’s year-round. There are those who still observe the Three Pilgrimage Festivals of Passover, Shavuot and Sukkot, going back to the times of the Temple. Others come just for Shabbat. Still others come for the snow (if they manage to make it through the roads). But for me, up until a few years ago, the connection between Time and the Holy City was sorely lacking.

A few days ago, I was walking by City Hall, when I chanced upon a friend from Tel Aviv. “What are you doing here?,” I exclaimed, shocked that he, of all people, had made the trip up Route 1. Semi-offended, he replied, “as if I was going to miss Elul in Jerusalem!”

My friend came to Jerusalem as part of a large group on a selichot tour, an Elul tradition that draws in many of the large crowds who visit the city around Rosh Hashanah. In the alleyways of the historic city, during the month before the Jewish New Year, thousands roam about round midnight or just before dawn, listening to the sounds of the shofar that pierce the nocturnal silence. Between the old houses, there emerge communities keeping alive the flame of long-standing traditions: those of Yemen, Poland, Greece, Persia, or the unbroken Jewish presence in Jerusalem.

But the city’s magical pull is not limited to early Fall. Come Shavuot, you could pick up a map of Jerusalem dotted with the locations of hundreds of shiurim, taught by men and women, young and old, observant and secular Jews. The energy contained in this celebration of teaching and contemplation truly brings worlds together, showing that everyone has their own place in our city, and rightly, naturally so.

And thus, around Shavuot and Elul, the inherent beauty of Jerusalem’s profound heritage is joined by the continuation of the city’s importance as a nexus of spirituality, going back to the days of King David and beyond. You can see it everywhere. In one event called Connecting Worlds, modern singers chanted hymns composed centuries ago, accompanied by Hasidic musicians. We at the Jerusalem Youth Authority have joined forces with the community of the Yeshurun Synagogue to produce a mass selichot prayer attended by thousands of Modern Orthodox, ultra-Orthodox, former Orthodox, non-observants and everything in between.

This spiritual revival has deep roots, following up on a long and arduous road undertaken by Jerusalemites of all stripes. Once a symbol of conflict and decadence, Jerusalem is now leading the nation in nurturing cross-sectarian cooperation. Adopting the spirit of inclusion and fraternity has led to the establishment of countless organizations and initiatives, social, political and educational. My friend Elisheva Mazya, founder of the New Spirit organization, told me that it was in Jerusalem that she rediscovered Judaism, as a kibbutz girl from the North. And living here has taught me, as an observant Jew, to realize that finding common ground entails compromises, and that the secular world has much to offer, even if it does not always conform to my beliefs. Even the ultra-Orthodox, hailing from a community following the Talmud dictate of “the new is forbidden by the Torah”, are nevertheless beginning to engage the general public and emerge as a cultural force.

With the sounds of the shofar shaking the walls of the synagogues, just as they made the walls of Jericho to crumble – it is my sincere hope that the walls that separate us will continue to fall apart.

About the Author
Hanan Rubin is a Jerusalem City Councilman and co-founder of Wake up Jerusalem, a social-political movement in Israel for young adults.
Related Topics
Related Posts
Comments