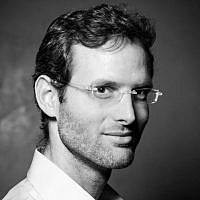 The Blogs
Tal Grunspan
Apply for a Blog
Advertisement
Please note that the posts on The Blogs are contributed by third parties. The opinions, facts and any media content in them are presented solely by the authors, and neither The Times of Israel nor its partners assume any responsibility for them. Please contact us in case of abuse. In case of abuse,
Report this post.

Two years ago I attended my first Limmud in the UK. It was as a leader of the 2011 Israeli social protests that I had been invited there and was expected to speak about my experiences and involvement with that. However I didn’t expect the invitation to be one that would change my life.

I arrived at the event and was immediately taken aback by the thousands of Jews from all walks of life and across the Jewish spectrum that had taken a week out of their lives to participate, learn and teach their fellow members of the Jewish community in the UK and from around the world. More than that, it was all organized by hundreds of volunteers and all of the participants, including the presenters, had to pay for the privilege. Furthermore, and perhaps more importantly, I was amazed at how Limmud is so inclusive and diverse and able to maintain and celebrate our common history, culture, religion and nationhood. I was amazed to find an event at which amongst the hundreds of presentations on offer there was to be found a session on ‘What’s Jewish about James Bond?’ on the same platform as yoga, Talmud scholars, and technology innovators.

Growing up, Judaism was not especially a meaningful part of my identity. Indeed, my father came from Egypt and was a leader in the movement against religious coercion and my mother came from a completely secular Ukrainian family. We were simply Israelis. At my Bar-Mitzvah however, which I celebrated through the then-new reform synagogue near my home, I became slightly more curious and so started a journey that I continue to this day, of defining the Jewish aspect of my identity.

My eyes were eventually fully opened when I was sent as a Shaliach to Jewish communities in places like Texas, Moscow, Belarus, Azerbaijan, Toronto, San Francisco and New York. The Judaism I encountered there was nothing like the image that I had gained growing up in Tel Aviv.

And then came Limmud, a further revelation and insight into my journey in the Jewish world. I found myself so excited about what was being done there that I wanted to join the movement locally, and although Limmud takes places in over 80 cities worldwide, as well as in Israel – Jerusalem, the Galilee, Beer Sheva and other places, there has never been Limmud in Tel Aviv.

When I persisted in pursuing this project, to bring Limmud to Tel Aviv, the Limmud organizers said, as they famously do, “you organize it”. So, with a few dozen dedicated volunteers with whom I started working a year ago, I am pleased to announce that on Thursday and Friday, May 14-15, 2015, Limmud will be coming to Tel Aviv.

For me, Limmud TLV is an opportunity to redefine Judaism for Israelis for whom the word has lost almost all meaning. But more than that, it is a platform where everyone can take part. Whether religious or secular, orthodox or reform, young or old, right or left, teachers and entrepreneurs, artists and academics, all are welcome and invited to teach and learn and help build a new community. With it being the first year that Limmud will be in Tel Aviv, we are hoping to reach 600 participants and presenters from Tel Aviv, Israel, and around the world.  The workshops will be conducted in Hebrew as well as 9 other languages.

Limmud TLV will be a fully volunteer-run, volunteer-managed operation. We are building partnerships with local organizations, including the Tel Aviv–Jaffa municipality, but all funding will be coming through donations and ticket prices.

In fact, the Limmud TLV fundraising efforts have already been launched as we have just started a crowd funding campaign. Crowd funding this new project and new community is not just a way to raise money, it is in the very spirit of Limmud: that everyone can and should take part to build the community together and that everyone’s volunteering and contribution makes a difference.

We seek to develop a Limmud community in Tel Aviv that will continue beyond the first event and grow into a redefinition of our identities that we can all be proud of.  Through the values of diversity and choice, volunteerism and empowerment, respect and mutual responsibility we invite you to participate in this exciting experience and event.

Want to be a part of Limmud TLV? Start by visiting our Indiegogo page, check us out on Facebook, and save the date!  Limmud TLV May 14-15, 2015

About the Author
Tal Grunspan was born and raised in Tel Aviv. Throughout his 18 years of activism, Tal has taken part in many organizations and public campaigns, worked as an advisor in the Knesset and was among the leaders of the "Tent Protest" in 2011; he is also a certified Yoga teacher. Tal is the founding chairman of the Limmud Tel Aviv community.
Related Topics
Related Posts
Comments