On the whole, and I hope you will agree, we are a pretty tolerant community in this country. We have more things in common than what divides us: we abhor anti-Semitism and are getting better at denouncing it from whatever source. We’re also relatively sophisticated in disentangling criticism of Israel from full-blown Jew-hatred.

What we’re not very good at is dealing with Jews who mouth loathsome sentiments, from out-and-out anti-Semites ­like Gilad Atzmon – yes, he has described himself as such – to some of the members of Jews for Justice for Palestinians.

Let me make it clear: I have absolutely no problem with justice for Palestinians, as long as there is parallel justice for the citizens of the state of Israel. The JfJfP mob don’t seem to think rights extend to Israelis. At the other end of the political spectrum there are the difficult supporters of extreme right-wing views.

One such is Douglas Altabef, a member of the executive of the board of Im Tirtzu, an Israeli group which proclaims that it is ready to “reclaim” Zionism, although from whom, it is difficult to discern. It should hardly need stating, but apparently to Im Tirtzu supporters it does, that no one has the exclusive rights to define Zionism.

Incidentally, I find it interesting, though not surprising, that Mr Altabef, who intends to perform speaking engagements in London on Sunday, is an emigrant to Israel from the US. His strident views only confirm me in the belief that much of America was once invaded by a nutter virus, but nobody wants to own up to it. Hence Sarah Palin, Donald Trump – and Douglas Altabef.

But one man who has gone from Israel to America – yet still believes he has all the answers – is also intent on visiting our shores. And this time I think we need to say, as they say in Israel, yesh gvul – there is a limit. And yes, I am aware that there is a group calling itself that, but that’s not what I am referring to. The man in question is called Yosef Mizrachi. 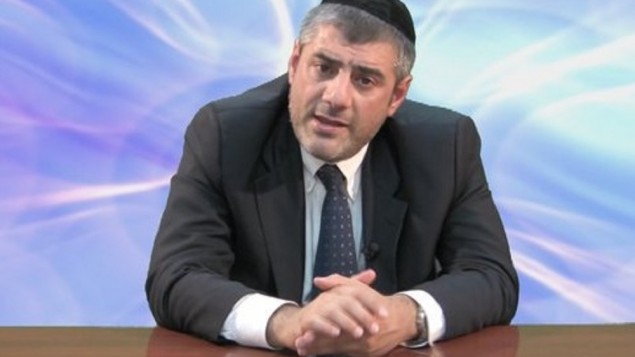 His own biography on his website, DivineInformation.com – no shrinking violet, he – is fittingly non-specific. You will not learn, for example, where he acquired his rabbinical ordination, although he styles himself Rabbi Mizrachi.

Here’s what he says about himself: “Rabbi Yosef Mizrachi was born in 1968. He was raised in Israel where he studied until 1986. In 1986, he was drafted to the Israeli Military (IDF) and served in the Air Force. Immediately after his release from military he immigrated to New York City where he was involved in the financial banking district.”

I don’t know what “involved in the financial banking district” actually means, but I imagine the impression we are supposed to get is that he was some big important banker. However, his bio goes on: “In 1994, Rabbi Mizrachi decided to dedicate his life to the awareness of Judaism among secular Jews. It was in that year that he began co-ordinating lectures and seminars among Israelis in the New York – New Jersey area.

In 1997 he left the financial district and enrolled [in] full time learning and teaching in a yeshiva in Monsey, New York.”

There’s almost no room to detail the plethora of really repellent views this man has disseminated under the guise of bringing a Divine message to the secular community. But try some of these for size: Down’s Syndrome children and those with autism are being punished for their sins in a previous life; children born blind are being punished for watching pornography in a previous life; a variety of cancers suffered by both genders are a result of sexual licentiousness; the number of Jews who perished in the Shoah was much less than six million because they were not all halachically Jewish; mixed dancing and women’s immodest clothing cause cancer.

To me, and I hope to the majority of Jewish News readers, these are not the views that should be expressed by a rabbi of any denomination.

More than 500 people have signed a petition to prevent Mr Mizrachi’s planned trip to speak in the UK. If we heard of such hateful opinions being presented by a Muslim extremist, we would, rightly, be up in arms. I hope our community – tolerant as it is – knows offensive bigotry when it sees it. Mr Mizrachi, in my opinion, should not be tolerated here.