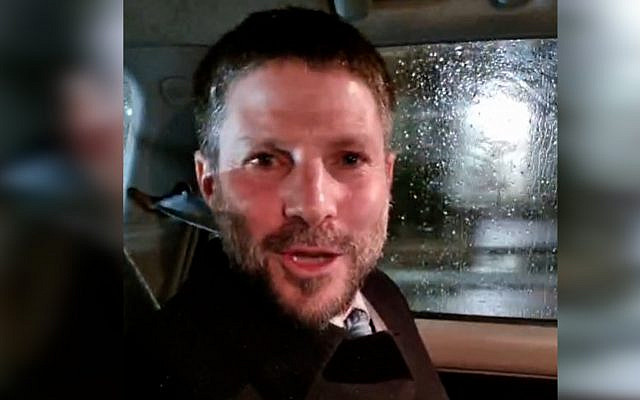 Bezalel Smotrich filmed himself in a car travelling 'between meetings' in North London on Wednesday night (Photo: Facebook)
Today, I am especially proud to be a British Jew. Yesterday, I felt anger and then relief as other British Jews refused to be used as pawns for Israel’s far right.

I was appalled to see far right Israeli Knesset member Bezalel Smotrich try to drag us into his campaigns of racism, homophobia and religious intolerance. His visit to the UK to stoke opposition to religious reforms in Israel is based on a hateful ideology. Previous comments that Reform Judaism is a ‘fake religion’ are not only demeaning, but fly in the face of inclusive values dearly held by British Jews. Even worse, Smotrich’s track record of hate and discrimination against Arab Israelis and LGBTQ+ people is, in the words of the Board of Deputies, ‘abominable’ and ‘hate provoking.’

I am heartened that the Jewish community here has rejected Smotrich outright. The Board of Deputies speaks for the overwhelmingly vast majority of British Jews when it tweeted in no uncertain terms: ‘We call on all members of the British Jewish community to show him the door. Get back on the plane Bezalel, and be remembered as a disgrace forever.’

As well as the Board of Deputies, the Zionist Federation was also happy to nail its flag to the mast. Speaking out against Smotrich’s rhetoric of division, it said that ‘far-right politics of hatred… have no place in our country nor in our community.’

There is a long overdue move in Israel to break the utra-Orthodox monopoly on conversion, kashrut certification and who can officiate at life cycle events. Currently, the ultra-Orthodox chief rabbinate has absolute control over these areas. But many Jews across Israel and the diaspora identify outside of this narrow definition. New laws proposed by Religious Affairs Minister Matan Kahana would weaken the hegemony of the chief rabbinate, a move opposed by Smotrich and his abhorrent ideology.

As if Smotrich’s exclusionary policies aren’t enough, the MK’s long history of inciteful remarks would turn your stomach. Smotrich calls himself a ‘proud homophobe’ and has been condemned by many across Israel’s political spectrum. He told Arab MK’s during a Knesset session in October ‘it’s a mistake that Ben-Gurion didn’t finish the job and didn’t throw you out in 1948.’ Can you imagine the justified outrage if an MP victimised another like that in our Parliament?

The State of Israel was founded as a Jewish and democratic state upholding the rights of all its citizens: Jewish, Arab, religious, secular. Israel has a duty to protect LGBTQ+ people and its religious, cultural and ethnic minorities as enshrined in the Declaration of Independence. The values of Bezalel Smotrich are neither Jewish nor democratic.

Smotrich consistently derides Reform Jews, LGBTQ+ people and Arab Israelis. This defies the Torah, which tells us that each person was made in the image of God. Even though Smotrich calls for the imposition of a theocracy run according to Jewish law, he doesn’t seem to understand that we were strangers in Egypt, or appreciate the many incredible contributions made by Arab, LGBTQ+ and Reform citizens of Israel. The only difference is, those people are not strangers; Israel is their homeland.

I can only commend the Board of Deputies for unequivocally standing up for my values.
About the Author
Rabbi Janner-Klausner grew up in London; worked as an educator in Jerusalem for 15 years working with Jews and as dialogue facilitator trainer of Palestinians and Israelis. She is the former Senior Rabbi to Reform Judaism in the UK and is now a qualified inclusion and development coach
Related Topics
Related Posts
Comments