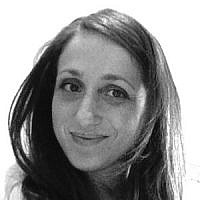 There was a man mumbling to himself, pacing on the subway. The crowd was different at this hour, as I rushed from my 8:30 AM class, to my 10:30 AM clinic. I only had three stops on the 5 train, as it whooshed from Union Square to Brooklyn Bridge — City Hall. And I usually liked to take that time to people watch and breathe, while finishing my morning coffee, making up everyone else’s stories as I rode along. But this morning, the mumbling man was telling a story all on his own.

As the man paced around the car, dancing as it jerked around, the four locks on his backpack jangling a beat over the noise of the train, I started to hear glimmers of agitation. He was quite upset that he had “paid a lot of money to get out of jail” and that now “he had to commute all the way to Manhattan for court, even though he was from the Bronx.” And this was all “somebody’s fault” and “somebody should pay.”

That’s when he looked up.

“I hate Jews,” he said, staring into the face of the man with sidelocks and a top hat by the door. “But I’m not racist, because I hate Jesus too.”

He continued his rant. “But man, I really hate Jews. You know you, you better not move onto my block, because I swear to God.”

He began to pace again, the locks ringing out a bit more acutely now as the rest of the train-goers grew silent with discomfort.

“Jews control everything. You know my lawyer? He’s a Jew. I bet he’s the reason I had to come all the way down here, to Manhattan. To accommodate him, with his money. You know, I paid a lot of money to get out of jail, to get here.”

The man with sidelocks stayed silent and didn’t move. His gaze did not shift. He didn’t look down at his shoes in discomfort, as some of his New York City citizen counterparts did. He didn’t put in his headphones either. Rather he stood, head erect, staring straight ahead, while the man with the many locks continued his string of racial slurs and expletives.

As a Jew, who doesn’t look like a typical Jew (whatever that means), I wanted to get up to defend him. To explain to the man with the many locks that he was taking out his frustrations with utterly racist generalizations; that he should get his facts straight, that this man could move onto his block if he pleased, because America was a free country. I wanted to tell him that his threats were empty, and that instead of bullying this poor man, he should be instead preparing for his hearing.

But as I was contemplating if my slim 5 foot 1 frame could really stand up to this perceptively larger man, someone else decided to give up his seat instead. He was at least 6 feet tall, not towering over the ranting pacer, but definitely taller and wider. And while one would expect that he might have stood up to confront the ranter, to tell him to back off or to stop, as I had been contemplating, instead he walked over to the man with sidelocks and shook his hand. He then proceeded to apologize to him, for the man’s rant, explaining that at least he knew that this Jewish man was not the cause of this man’s or the world’s problems. He then asked if he could please stand near the man, so that if the ranter would come back, he’d be there to defend him?

The man with sidelocks consented, just as the ranting racist turned back around to face him, finishing his latest narrative on how the Jews should go back to Israel and keep messing that up, so this way he doesn’t have to burn Jews for messing up America, just as Hitler did to save his country.

Upon seeing this new man standing beside the man with the sidelocks, the man with the many locks threw down his backpack and challenged the defender to “lay a finger on him.” The defender simply laughed at him, told him to calm down, and said he figured he was about to arrive at his desired location. The man looked at him menacingly, and then at the ground. He picked up his backpack, just as the train slammed to a stop and said “I may be leaving, but I’ll know if y’all keep talking about me.” He left.

This was all in about the six and a half minutes it took the train to travel between the Union Square and Brooklyn Bridge — City Hall stop. And it made me reconsider a new definition of a truly good Samaritan: what if instead of confronting the irrational and agitated actors we are faced with everyday, we just instead stood by, as peers, next to those being oppressed? Imagine if I or another person on my subway would have also stood next to the defender and the man with sidelocks. Would the agitated pacer have challenged the three of us? What if it would’ve been four, six, ten? Would the man have even thought to take out his frustrations through a racist rant if it would’ve been implied that someone would’ve defended the perpetual scapegoat?

I turned around to thank the defender, and tell him how much I appreciated what he did, hoping someone else would be inspired and this would inspired more actions such as this in others, as it had in myself. But the moment was fleeting, and “with a stand clear of the closing doors please,” he was gone.