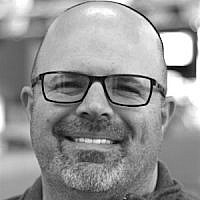 The Blogs
Dan Moskovitz
Apply for a Blog
Advertisement
Please note that the posts on The Blogs are contributed by third parties. The opinions, facts and any media content in them are presented solely by the authors, and neither The Times of Israel nor its partners assume any responsibility for them. Please contact us in case of abuse. In case of abuse,
Report this post.

As a Canadian living in the United States and an American living in Canada, we are proud of the Canadian response to the Syrian refugee crisis. We also are frustrated by the closed hearts of many Americans and that country’s political leadership. This is why we are transcending borders and politics to form a unique partnership; building a bridge instead of a wall between our two countries on this issue.

As Jews, we believe there is another emotion beyond pride and shame, and that is empathy. Jewish history is replete with experiences of Jews being strangers in strange lands, being denied entry or turned back at borders, or being expelled from their homeland. This is not simply a 20th century Jewish experience, but goes all the way back to the biblical story of the sons of Jacob, who fled a famine in Canaan for the safe harbor offered by ancient Egypt.

On Passover, we read, “My ancestor was a refugee Aramean. He went down to Egypt with meager numbers and lived there.” The Egyptian Pharaoh welcomed the Children of Israel and gave them food, shelter and fields. They flourished in Egypt for 400 years. That is, until a new Pharaoh came to power and oppressed them, prompting what we record as the biblical exodus.

As we watch some of the 60 million displaced citizens around the world run from chaos to chaos, we hear the cry of our brothers and sisters asking for help. We are called by the most oft repeated commandment in the Torah, “Love the stranger because you were once strangers.” And as Jews, living in a unique time in history, we recall the plight of our own ancestry and feel a deep sense of empathy. We take our sense of agency to heart to act on behalf of those seeking refuge.

As individual Americans, there appears to be little we can do. Xenophobia, Islamophobia, and naked bigotry characterize our political discourse. Lady Liberty hangs her head in shame as “huddled masses yearning to breath free” are told in so many words, “You are not welcome here.“ We observe with great disappointment that America has forgotten who she is. We are a nation of immigrants, but sadly we have a history of closing the door behind us once we call our new country home.

And yet just north of us, a new light shines. Across the border, Canada is embodying in word and in deed the biblical command to love the stranger and the poetry of our national symbol, “Give me your tired, your poor, Your huddled masses yearning to breathe free, The wretched refuse of your teeming shore. Send these, the homeless, tempest-tost to me, I lift my lamp beside the golden door!”

When it comes to welcoming strangers, Canada is by no means perfect. In 1945, an unidentified immigration agent was asked how many Jews would be allowed in to Canada after the war and he replied, “None is too many.” Decades later, Canada confronted this national shame and created a unique refugee resettlement program, which allows faith-based organizations, schools, associations as well as private groups of individuals to privately sponsor refugees.

For decades, Canadians have used this system to save the lives of tens of thousands of the world’s most vulnerable. These families and individuals are welcomed to Canada with open arms and open hearts. They are integrated, one by one, into Canadian society and help form the rich mosaic that makes Canada one of the most culturally diverse and socially secure countries in the world.

As Reform rabbis leading congregations in each country—Temple Sholom in Vancouver, BC and Community Synagogue in Rye, NY—we have raised the estimated CAD$80,000 needed to settle two Syrian refugee families in Vancouver. Once landed in Canada, our congregations will work together in many tangible ways to support these parents and their young children through an incredible period of transition, as they establish a home and integrate into the local community.

Our support for these families is real. It is urgently needed and ongoing. Our unique model of partnership and collaboration has inspired other American Reform congregations to seek out Canadian partners to do the same thing.

The Talmud teaches that if you save one life, it is as though you have saved the entire world. There is no greater imperative than to save a life. Overcoming borders and politics, we are doing what the American government refuses to do and what the Canadian people should not have to do alone. We love the stranger because we were once strangers. All of us were. This is something we must never forget.