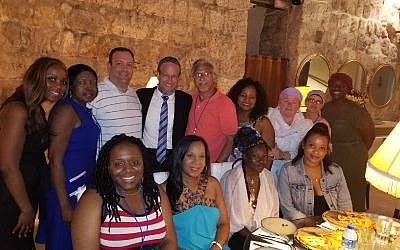 What happens when people from multiple religious, political, economic and social take a trip to Israel together?

When the adventure is sponsored by The Bridge Multicultural And Advocacy Project , the Unity in Action team from the United States, participants came home educated and energized to encourage support for all religions to work together and support Israel. The latest group just completed a successful nine day trip across the Holy Land.

According to trip coordinator and the Unity in Action task force leader, Mark M. Appel, founder of the Bridge, “I have been vocal and have spoken out against the increasing religious and racial prejudice in our nation. Instead of sitting and doing nothing, I brought together community leaders, many who seek to run for elected offices. Most participants had little knowledge about Israel, the Jewish people, and how all live side by side in Jerusalem, Tel Aviv and even in Judea and Samaria. We all need a deeper understanding of each others cultural and religion is vital and so necessary to help our divided country come closer together with a deeper respect for each others values.” 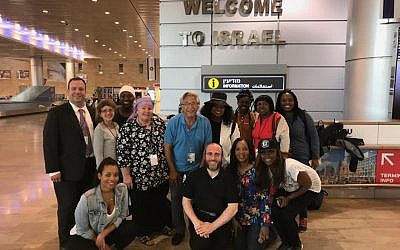 The participants visited various museums, Israel multi-ethnic communities and met many of the countries political and religious leaders. They received a private tour with Yoni Peres, son of the late Prime Minister Shimon Peres, at the Peres Peace Center in Tel Aviv. They spent hours visiting the Western Wall, Bethlehem and the Church of The Holy Sepulchre and a Palestininian village, Husan, near the West Bank. Husan is one of the areas Israel won during The Six Day War. It was the site of a car-ramming attack in late June.

Rabbi Bob Kaplan, a leader with the Jewish Community Relation Council of New York joined the mission in Israel. Kaplan hailed this trip as a huge success. “Multicultural trips are a great educational experience for different, diverse communities to better understand each other by bringing respect and unity to all,” Kaplan said.

Many participants from this tour represented Caribbean communities throughout the United States. “This trip has bought clearer understanding to me that we are all children of God and understanding and working together is a must for us to be able to lead and build a stronger nation,” said Farah Louis, a participant on this mission and community leader in New York City.

The Mission of The Bridge Multicultural Advocacy Project (MCP) is to unite and energize people of every racial, ethnic, cultural, and religious group across New York City and the United States. To address social issues facing society today and to advocate for transformational social change as “ONE” united community to promote and advocate government to educate society as a combined unified. For over a half a decade, The Bridge has engaged in creating a venue and center where all communities gather and work together as one voice and to assist communities world wide and in Brooklyn. From blood drives to health fairs, and being at the site of numerous enormous relief projects, The Bridge Project has successfully assisted communities in crisis in the Middle East, Haiti, Yemen, Puerto Rico, and Florida.

For the past 20 years, the leadership of The Voice of Justice and The Bridge Multicultural Advocacy Project has played a historic role advocating for social change in our nation. That impact has been most evident in our ability to petition and legislate social issues and health initiatives into laws. A strong advocacy movement has been extremely successful in effecting our community for change. They have supported more effective laws to protect our children from sexual abuse as well as our aggressive push for expanding services for children of special needs. Other work has included fighting serious health issues including; Diabetes, Asthma, and Obesity has lead to changes and the expansion of city-wide programs in addressing these issues. They run ongoing after school, college prep and summer programs.

They can be reached at: www.thebridgemcp.com