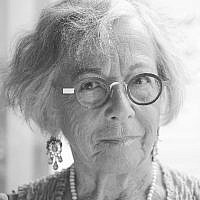 The Blogs
Nidra Poller
Apply for a Blog
Please note that the posts on The Blogs are contributed by third parties. The opinions, facts and any media content in them are presented solely by the authors, and neither The Times of Israel nor its partners assume any responsibility for them. Please contact us in case of abuse. In case of abuse,
Report this post.

It was all so predictable: Billowing clouds of dense black smoke in Gaza, satisfaction in technicolor at the inauguration of the American embassy in Jerusalem. With varying degrees of sarcasm, on a familiar scale from naïve humanism to virulent Jew hatred, commentators commented on the contrasted images. Forcibly to the detriment of Israel. The Jews dance while Gaza burns and bleeds. Bloodbath in Gaza, broad grins in Jerusalem. Indecent! Provocation! And they deliberately chose this highly sensitive date—confluence of the Nakba and the first day of Ramadan—to dangle the red meat of their triumph in front of starving Gazans.

I don’t waste my time analyzing this discourse detail by detail. I did it in September 2000 [Al Dura: Long Range Ballistic Myth, Troubled Dawn of the 21st Century] and have followed the consequences over the years and to date. And I dare believe that my work, and that of other fearless thinkers, has not been in vain. If the adversaries pursue the same strategy and the unthinking commentators respond with the same half-truths and wholesale lies, the results on the ground are no longer in their favor. And that’s what counts.

There is another way to read those iconic images. The Gazan March of Return appears in all its nullity. Hate-filled individuals choke on their own smoke, blinded by their own stupidity, reveling in their self-imposed immobility. The very image of the slingshot-wielding shabab with his head wrapped in a keffieh is lost in the black smoke of burning tires. In civilized societies tires are made for vehicles that transport people, goods, and livestock. The invention of the wheel stands as a turning point in human history. The retrograde March of Return turns that potential for movement into volcanic self-destruction. And Israel doesn’t have the right to bask in the light of its accomplishments?

The choice of date—May 14th—is not a slap in the face of the nakba-oppressed Gazans for heaven’s sake. It’s the so-called Palestinians that pegged their nakba catastrophe to the date of Israel’s declaration of independence. At least it’s clear. Israel celebrates 70 years of independence, the “Palestinians” commemorate 70 years of genocidal anti-Zionism. The Islamic refusal of Israel’s right to exist is obvious. It isn’t hidden behind death camp walls, it is openly proclaimed, proudly declared, in print, in public, in video and on the ground with every sort of lethal weapon available.

The immediate, openly stated, objective of the March of Return is to destroy the barrier, pour into localities 100 meters inside Israel, and kill as many people as possible. The long term objective is to annihilate Israeli sovereignty and return [sic] to the pre-1948 status quo. Except for the children forced to approach the border fence, I do not see the aggressors as tools of Hamas. I think they are willing executioners.

And while we are talking frontiers, we should remember that those (no one called them Palestinians at the time) who fled from the newly independent state of Israel in 1948, whether chased or encouraged by Arab leaders, crossed the border from Israel into the Egyptian colony of Gaza. Yes, I know, it wasn’t called a colony. It was an entity, under Egyptian authority. It certainly was not an “open air prison strangled by an Israeli blockade.” As for the other frontier, the one that should traipse gaily through the steep lanes and byways of Jerusalem according to the fervent wishes of “everyone knows the 2-state solution,” isn’t the choking smoke from Gaza enough to obliterate that shameless fantasy now and forever?

If that deal had been done… at Camp David in July 2000, for example, Jerusalem would have been swallowed up by billowing clouds of dense acrid smoke shortly thereafter. And the death toll would not be 50 or a 100, not the “Palestinian genocide” deplored by the gentle Erdogan (who can’t count the dead when they are of his own making), the death toll would be … immeasurable. I will not give a figure. Because it didn’t happen and it isn’t going to happen.

What does a rich harvest of yesterday’s commentators yield? Israel doesn’t have the right to bask in the sun, they’re going to get scolded internationally, Trump did it to coddle his evangelical voters, he violated international law, and the consequences will be might be should be catastrophic. The West Bank will or should or might join in and a third intifada will deservedly strike Israel. Harsh words are coming from political authorities and international bodies. Emergency meetings of the UN and the Arab League are convened. Add to this Trump’s withdrawal from the JCPOA and, to quote one French journalist, the gates of hell are going to open.

I followed the story all day long yesterday, and I couldn’t stop laughing… at the debates. It was all snipped genes! What kind of creature would be concocted out of a genetic code composed of snipped genes? The half-truths, those snipped genes, prove that those who proffer them do know the facts. That’s why they are careful to present them in aborted form. They know the facts because it is all so obvious; the discourse criticizes itself without our intervention, it falls apart even as it is being pronounced.

And the irony clanks like the wheels of fortune. Here in France, from one channel to the other and all up and down the columns of print media, the “bloodshed in Gaza” story is preceded or followed by the “knife attack near the Opera house” item. Khamzat Azimov, a 20 year-old French shahid of Chechnyan origin, murdered a 29 year-old man summarily identified as Ronan, described by one of his neighbors as an exemplary human being. The four surviving victims haven’t even been named. As if they count for nothing. The Azimov family was given asylum and, subsequently, French nationality. Saturday night, Khamzat took a knife from his mother’s kitchen (see Nancy Hartevelt Kobrin’s Jihadi Dictionary for insight into this significant detail) and slashed throats in ritual fashion, until he was shot dead by a simple patrolman.

Because things have changed in France. Today, a modest neighborhood policeman knows how to eliminate a killer on the rampage, and does it without fear of being accused of brutality. This is a democracy and voters are fed up with these “terrorist” attacks that hold no mystery and bear no euphemisms. Khamzat Azimov was flagged as a security risk in 2016. Lost in the mass of 20,000 more or less dangerous suspects, he had emitted no particular signs of impending disaster. Just someone to be watched. More or less. And the question is raised repeatedly: Can’t these people be detained? Can’t the legal or illegal immigrants, foreigners, and dual-nationals recognized as security risks be deported before they grab a knife from mother’s kitchen and go on a killing spree?

So, instead of adopting hyperbole from questionable sources—bloodbath, genocide, and excessive force against peaceful demonstrators—the “specialists” should do the arithmetic. Azimov multiplied by the tens of thousands equals the potential shahids raging to cross the border, pour into Israel, and do what Khamzat Azimov did. However, tens of thousands of potential throat slitters have already crossed the border into France; any one of them at any time anywhere can burst into a thick billowing cloud of acrid hatred, and kill… us. Now, add the thousands of veterans coming back from active duty with Daesh, and preparing to fight on the battlefield here…

They won’t be stymied by snide antizionism, frightful clucking, and pompous declarations from international agencies. Tsahal is the default position for the defense of our lives and liberty.

About the Author
Nidra Poller is an American-born writer who has lived in Paris since 1972. She is author of works of fiction in English and in French, and has published in many venues, including the Wall Street Journal Europe, Family Security Matters, New English Review, Times of Israel (French), Commentary, Midah. She is the author of literary-political books testifying to the Troubled Dawn of the 21st Century (her latest release). The French version, L'Aube obscure du 21e siècle was published in December 2017.
Comments