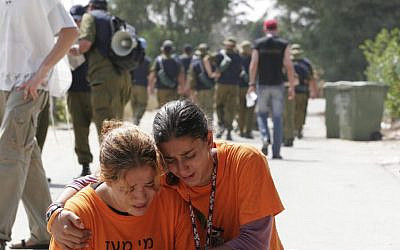 This week marks the 15th anniversary of Israel’s forcible expulsion of 8,000 Jews from their homes in 25 farming and agricultural communities they had lovingly built in the Gaza strip with the active support of previous governments. Those thriving settlements had provided jobs and a decent living to thousands of Gaza Arabs and were a model of the kind of coexistence that can never be created by American roadmaps or forced by European boycotts and divestment.

By the end of August 2005, no house, synagogue or schoolhouse was left standing – even the dead were removed from their graves. The only structures left intact were 3,000 greenhouses which Israeli leftists hoped would be taken over by the Arabs to build their new state. They encouraged American Jewish donors to pay fourteen million dollars to buy up these greenhouses only to see them quickly looted and converted to arms and missile production for a new Iranian proxy front against the Jewish state. A front that has ignited three wars and left southern Israel under continuous rocket attack for the past 15 years.

Over the centuries Jews had become used to being expelled from their homes and host countries. But for this to happen in their own homeland and by the hand of their own brothers and sisters in uniform was simply too much to bear. Many abandoned their religion and others left Israel for good. Those that remained were rehoused at a cost of 15 billion shekels and all too many of them are still costing the state dearly in terms of psychotherapy, whether from the uprooting in their infancy or the stress of incessant rocket fire.

And for what?  The so-called ‘disengagement’ was not forced on Israel by war or some edict from America, the EU or UN. It was a totally unilateral move by then prime minister Ariel Sharon in hopes that this would ease world pressure on ceding West Bank territory to a PLO state. The trouble is that you cannot keep throwing pieces of red meat to a lion in hopes that it will turn into a vegetarian. And the reality of the Arab world is that vacuums are never filled other than by terror groups. What happened to Gaza, Lebanon, Syria, Iraq, Afghanistan will follow in any area carved out for a so-called Palestinian state. We saw how quickly Hamas threw out Abbas from Gaza. The same will happen to the West Bank if our leaders are ever so foolish as to volunteer more land for peace.

I do not blame the IDF for their role in evicting 8,000 Jews from their homes. The real villains are the media who branded peaceful protest as ‘insurrection’ and cheered on the judiciary which meted out Soviet-style punishment and administrative detention to Gush Katif supporters, many of them minors.

That same media turned a blind eye to the two corruption probes against the architect of the Gaza surrender, Ariel Sharon. As long as Sharon was giving away part of the homeland and empowering the building of a Palestinian state, the media and judiciary would protect him like an etrog – this being the exact wording of the senior journalist and commentator who instigated this perversion of his profession.

The multimillion-dollar bribery and corruption claims against Ariel Sharon 15 years ago make the indictments against Netanyahu over champagne, cigars and favourable press coverage look even more pathetic by comparison. Both prime ministers leading Likud governments – but only one doing the bidding of the Left. Only one protected by the media and judiciary.

Unfortunately lessons in Israel need to be learned the hard way. By cheering on the nightly demonstrators outside Netanyahu’s home, the media is again playing a dangerous game. They want to unseat a fairly elected prime minister and deny him the presumption of innocence and a fair trial. They are underestimating the strength of Jewish nationalism that bolstered the Likud vote in each of  last four elections, to its highest ever level this time.

Fifteen years ago the settlers had no such thing as social media to get their voices heard, organise larger protests and expose the treachery of the mainstream media and the ugliness of its enablers in the judiciary.

For all his swashbuckling warrior status, Sharon would probably not have withstood one tenth of the pressure that has been meted out to Netanyahu over these last few months, even without the scourge of Covid 19.  To repair the damage wrought by Sharon’s Faustian deal with the Left, Netanyahu should now act in the boldest way possible – by implementing Israeli sovereignty over the strategically vital Jordan Valley. What happens to the interior of the West Bank can be left for another day. But now is the time to finally bury the narrative of 1967 borders.

History will judge Netanyahu harshly if he fails to seize this opportunity. The uber-benevolent Donald Trump is in the White House. He has been starving the PA kleptocracy of terror funds as have other former benefactors even in the gulf. For decades Israel has been the lead story in media, no matter how trivial the issue. But now the world is mesmerised by Covid. Iran is on the ropes and no longer able to fund Hezbolla and Hamas. Syria is a basket case and Lebanon is now in meltdown.

About the Author
Zalmi Unsdorfer is a Jewish Religious Zionist and Chairman of Likud-UK. He is a commentator on Israel as a writer, TV & panel commentator, and advocate. He supports Jewish resettlement in all of the Jewish homeland, Eretz Israel.
Comments