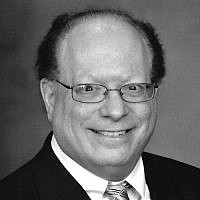 The Blogs
Steven Morgen
Apply for a Blog
Advertisement
Please note that the posts on The Blogs are contributed by third parties. The opinions, facts and any media content in them are presented solely by the authors, and neither The Times of Israel nor its partners assume any responsibility for them. Please contact us in case of abuse. In case of abuse,
Report this post.

This past week the nation mourned the loss of the 41st President of the United States: George Herbert Walker Bush. Many things have been said and written over the past week about his numerous accomplishments, his service to our country in World War II as well as in his political career, and perhaps most especially, his character. There is much I could say along those lines, but here let me just mention a few of his legislative achievements.

Perhaps the most famous phrase President Bush is known for is his famous “1,000 Points of Light.” He first mentioned it in his acceptance speech at the Republican National Convention in New Orleans. He had just been nominated to be the Republican candidate for President in 1988. He “likened America’s clubs and volunteer organizations to ‘a brilliant diversity spread like stars, like a thousand points of light in a broad and peaceful sky.’”

He repeated “the phrase near the end of his speech, affirming that he would ‘keep America moving forward, always forward—for a better America, for an endless enduring dream and a thousand points of light.’”

This past week as our nation mourned the passing of the President, I particularly thought about Bush’s “1,000 points of light” because we Jews are celebrating Hanukkah this week, lighting our own eight points of light. And I want to suggest that one of the meanings of our Hanukkah lights is not so different from President Bush’s. What do I mean by that?

Well, we celebrate the victory of the Maccabees over the Syrian Greeks who tried to force us to abandon our faith and our way of life. The Maccabees succeeded in ridding our country of our oppressors and rededicating our Temple to the Worship of the One God, our Creator.

The light of Judaism had not been extinguished. The teachings of our Torah, that we should care for the widows and orphans, the poor and the strangers who live among us, remained alive, because the Maccabees won. The light of monotheistic morality won. The light that calls us to be kind and compassionate, just and honest, won. That is one aspect of the meaning of our Hanukkah lights.

It is interesting to note that we are always reading the story of Joseph during the Hanukkah season. The story of Joseph is also about the flame of hope and faith. Joseph never gave up. Even when his brothers sold him into slavery. Even after he was thrown into prison in Egypt. He maintained his faith and his integrity. And because he did, he was able to prepare Egypt for the coming famine, saving not only the Egyptians, but many other peoples including his own family in Canaan. You might say that Joseph was one of God’s 1,000 points of light.

And, finally, the reading from the Prophets that we read on the Shabbat of Hanukkah is from the Prophet Zechariah. (Chapter 2:14-4:7, but see all of Chapter 4) It is Zechariah’s vision of the rebuilt Temple. Zechariah lived during the generation that returned from Babylonian Exile and rebuilt the Temple to worship our God in our homeland again.

But as the Temple was still being rebuilt, Zechariah had a vision of what it would look like when it was finished. And he saw the Menorah, the seven-branched lamp that lit up the Temple courtyard. And next to it were two olive trees feeding olive oil through tubes into the lamps so that the flames would shine brightly. The olive trees, he is told, represent the Jewish leadership: the High Priest (the religious leader), and the Anointed Secular Ruler. Here again we have light as a symbol of hope, of God’s presence in our lives, and about the wisdom that God has given us to create a better world.

Each of these stories has in common a very important truth: God needs us. He needs human beings to make things happen in the world.

God didn’t just kick the Greeks out of our country. He inspired the Maccabees to fight for it.

God didn’t just tell the Pharaoh of Egypt to prepare for a famine, he sent Joseph to interpret the Pharaoh’s dream, and then inspired Joseph with a plan to save the kingdom. The plan had to be implemented by people.

And God did not zap the Second Temple into existence. He inspired the Jews to build it. And he inspired their leaders – the High Priest and the Secular Ruler – to cause God’s light and wisdom to shine in the renewed country. Feeding the light of wisdom, freedom, hope and courage into the Lamp of the Temple.

These stories teach us that we – yes, we mere human beings – are God’s agents in creating a better world. A world of compassion that cares for others. A world with a 1,000 or a million, or even a billion points of light.

In Bush’s first inaugural address, he referred again to his 1,000 points of light. He said:

“I have spoken of a thousand points of light, of all the community organizations that are spread like stars throughout the Nation, doing good. We will work hand in hand, encouraging, sometimes leading, sometimes being led, rewarding. We will work on this in the White House, in the Cabinet agencies. I will go to the people and the programs that are the brighter points of light, and I will ask every member of my government to become involved. The old ideas are new again because they are not old, they are timeless: duty, sacrifice, commitment, and a patriotism that finds its expression in taking part and pitching in.”

In Zechariah’s vision, he hears the angel of God tell him God’s message: Not by might, nor by power, but by My spirit, says the LORD of Hosts.

Let that spirit guide us to creating again a 1,000 points of light.

About the Author
Rabbi Morgen is an Associate Rabbi of Congregation Beth Yeshurun in Houston, TX. He has served on the Boards of the Houston Jewish Federation, and the local boards of the AJC, and the ADL. He is a Senior Rabbinic Fellow of the Shalom Hartman Institute. He graduated from UCLA School of Law and practiced law in Los Angeles. He was ordained by JTS in 1998.
Related Topics
Related Posts
Comments