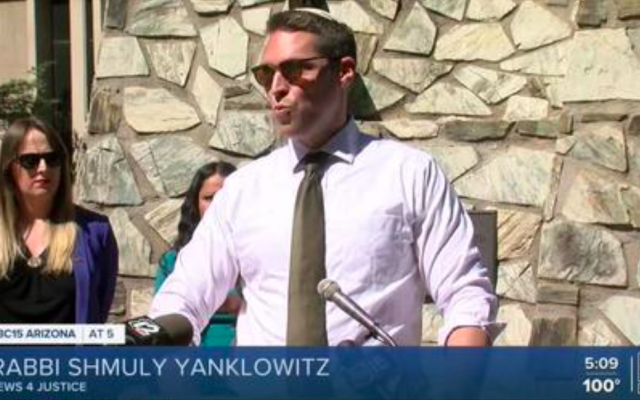 The governor where I reside in Arizona, Doug Ducey has followed in the shameful lead of Texas Gov. Greg Abbott in enacting a policy of bussing migrants out of the state and to Washington, DC. These politicians are effectively saying, “These people are not my problem.”

Living near the border and serving asylum seekers every week for many years, I’ve seen the pain and distress that these people are going through. What they need is a hug, hydration, a warm meal, and medical attention — and somewhere to sleep, to recover from their deep exhaustion. What they don’t need is to be a pawn in a political stunt.

I recently held a press conference because this is an affront to my Jewish values. To see why, we need to look no further than to the example of the first Jew, Abraham.

As it is told in the Book of Genesis, chapter 18, shortly after Abraham enters into covenant with God via circumcision, three mysterious guests appear at the entrance of his tent. Abraham, of course, doesn’t shoo them away and send them off to another town.

Instead, he runs to greet them, bows down to them and tells them, “Let a little water be brought; bathe your feet and recline under the tree. And let me fetch a morsel of bread that you may refresh yourselves.” He additionally served them a “tender and choice” calf and “waited on them under the tree as they ate.”

These guests turned out to be messengers of God, but the lesson applies universally. The great Jewish philosopher Moses Maimonides taught: “The reward for escorting a stranger is greater than any reward. It is a practice introduced by our father Abraham, a way of kindness which was habitual with him.” However, the Rambam also identified the other side of that coin, saying, “The sages have declared: ‘Anyone who does not escort his guests is almost guilty of bloodshed.’”

When the stranger comes to us, we become in large part responsible for whatever good or bad happens to them, and we bear guilt when we put them in danger. Whatever the politicians might do for political points, these precious human beings are our responsibility. 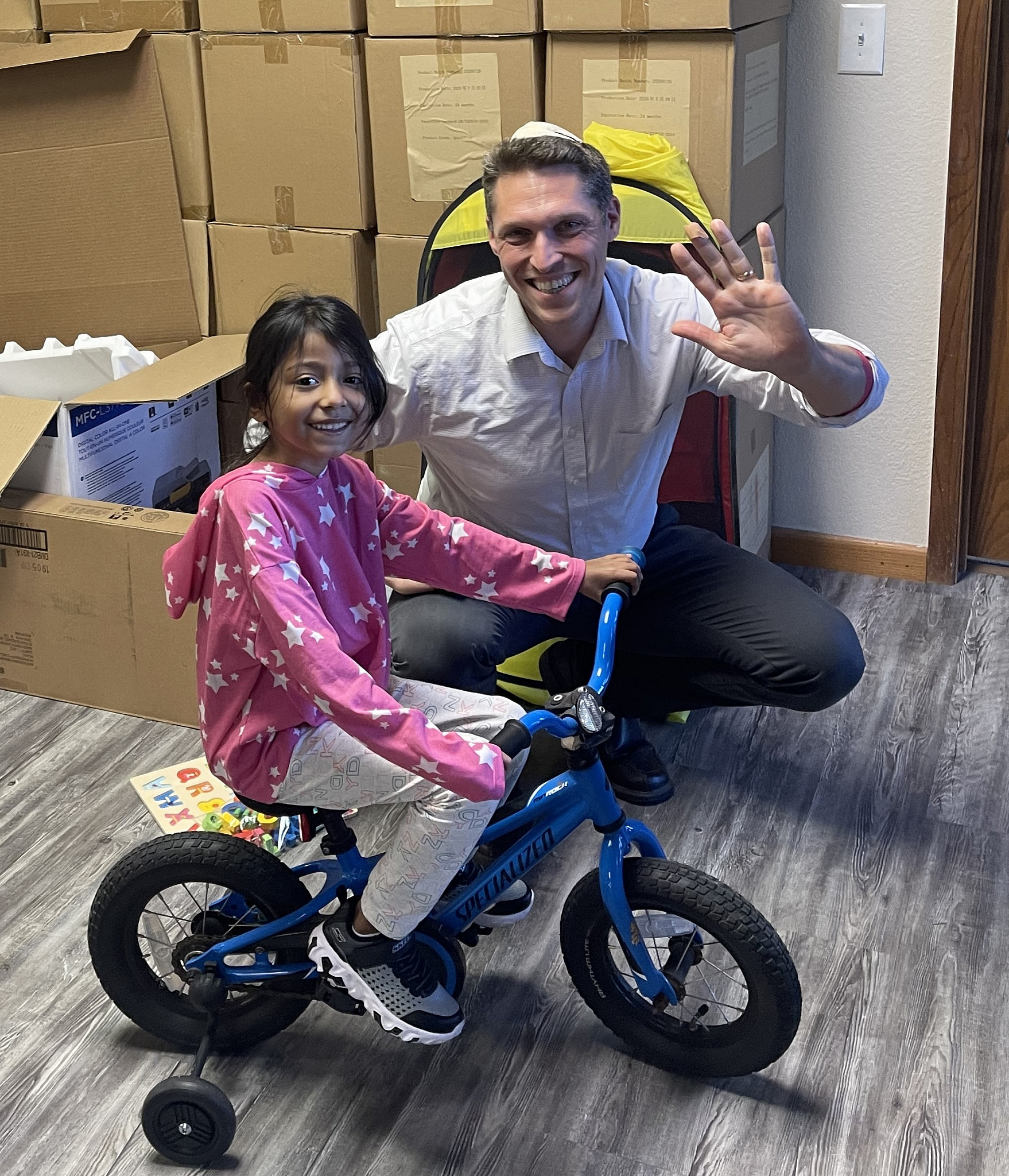 Rabbi Shmuly gifting a bike to an asylum seeking child in his office. (Arizona Jews for Justice)

The text of the Torah tells us that, when the strangers appears, Abraham literally ran over to them and bowed down to them. That’s what it means to be a person of virtue. If someone is at your tent, you race to help them. If you don’t do that, that guilt is on you.

When we look at the stunt being performed by our politicians in the Southwest, we see exactly what the tradition warns us against, the abrogation of our responsibility to address the needs of the stranger.

The Torah contains three distinct commandments to “love”: to love God, to love your neighbor as yourself and, the one that is often overlooked, Deuteronomy 10:19, “Love therefore the stranger: for you were strangers in the land of Egypt.”

These lessons from the Torah must inform the moral consciousness of those who are inspired, or claim to be inspired, by religion. 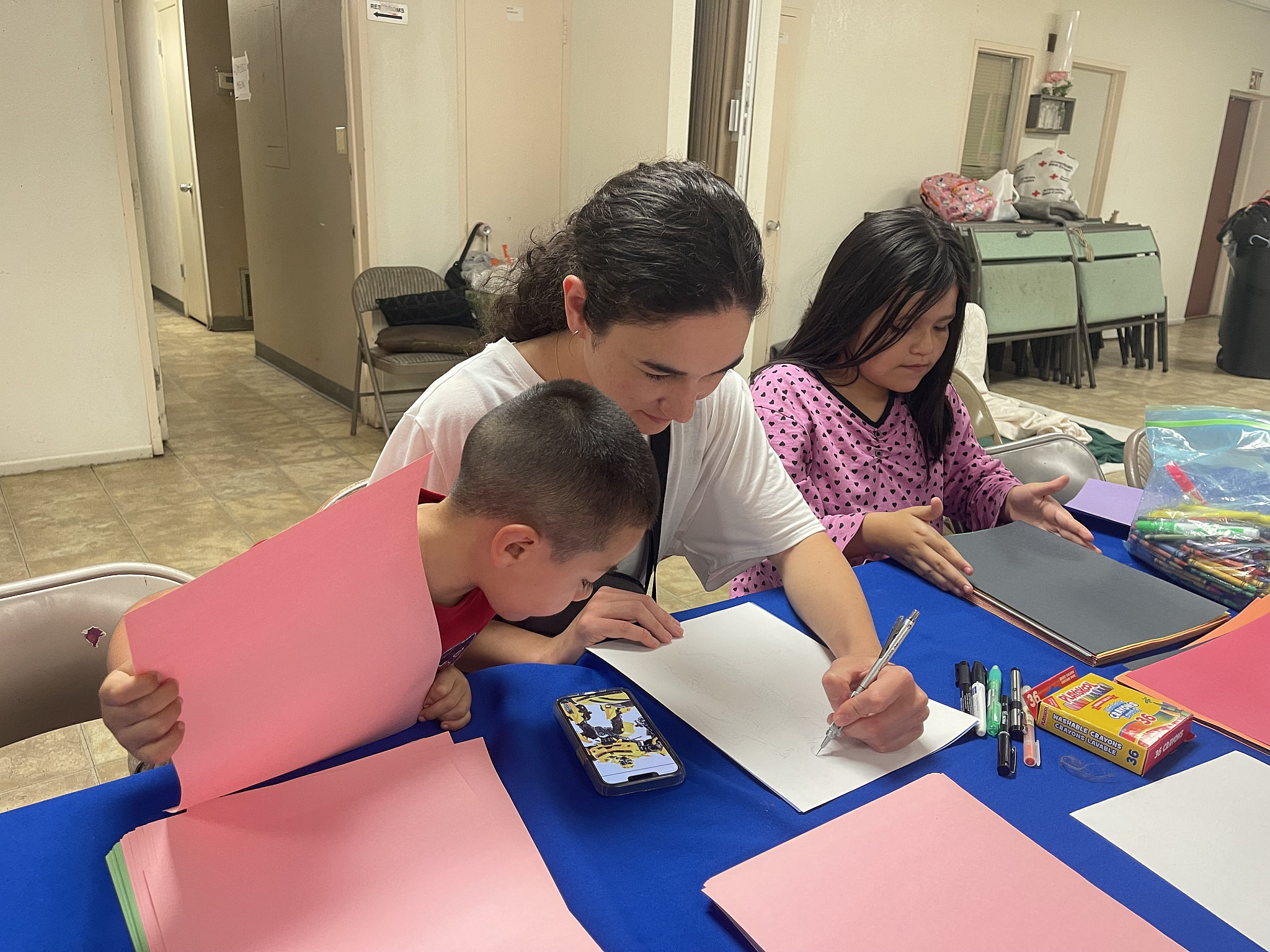 Amy Axelrod working with asylum seeking children as part of her internship at Valley Beit Midrash. (Arizona Jews for Justice)

And so, there is a federal responsibility toward migrants, asylees, but also a state responsibility, that the governors assume on behalf of the people. Additionally, on a personal level, there are ways for regular people, especially living near the southern border, to get involved to help—even through gestures as small as my family does, sometimes opening up one’s home to refugees and asylees for meals and offering necessary food and household goods.

When I think of Jewish history of Jews being wanderers and second-class citizens, I can only imagine the terror as a parent not knowing how to protect your children. That historical consciousness has grounded me in an empathy for those who still live in that terrifying reality.